Had hoped to also squeeze in Engineer Pass (which is between Ophir and Lake City on the map below), but decided I was short on time but more over was worried I'd encounter a bit of snow on Engineer too. 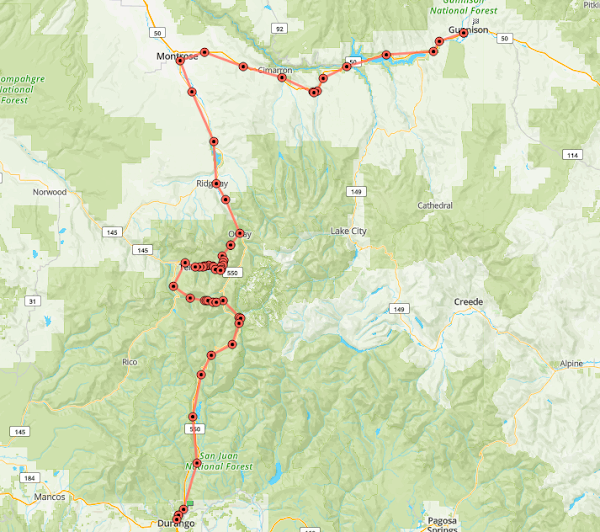 This wouldn't have been the toughest on Imogene...if it wasn't for the snow o_O

At the visitor's center in Silverton. No real good pics since I stayed on the outskirts of town.

Hmmm...there's starting to be snow on the road. When I saw snow on the peaks, I figured it was like Ophir and the road wound around without actually going over the summit...

Yeah...no more still photos till I got to the top. I was a bit busy concentrating on slippery snow. Last 100' which was extra steep I ended up engaging the front lockers too as the Jeep was really hunting for traction.

Only the 2nd highest spot in Colorado you can drive a Jeep.

Welp, it's all downhill from here.

I *really* lucked out -- they are widening US 50 through a canyon and the road is open only limited hours each day.

I happened to hit the block just a couple minutes before 5:30, and it was a fairly short wait till they let our side through.

While I originally planned to go to back to Silverton on Wednesday with Eric...if his flight was late we'd miss the window for the road opening. The other way around is by Grand Junction which is less than 2 hours from Moab and nearly 3 hours to Silverton. Best I can tell there are only four east-west crossing of Colorado without resorting to Jeep trails -- US 40, I-70/US 6, US 50, and US 160 far to the south.

Combine that with it being likely Black Bear Pass already has snow before you get down to the switchbacks, and I really don't want to go through snow again on the high passes...we'll head for Moab directly instead.

The schedule allows them to blast during the day, push the debris to the side, let traffic through, blast some more.

Then overnight they come in with dump trucks to haul off the blasted rock.