Some nice Sausage & Peppers, sausage from Campbell's in Griswold. 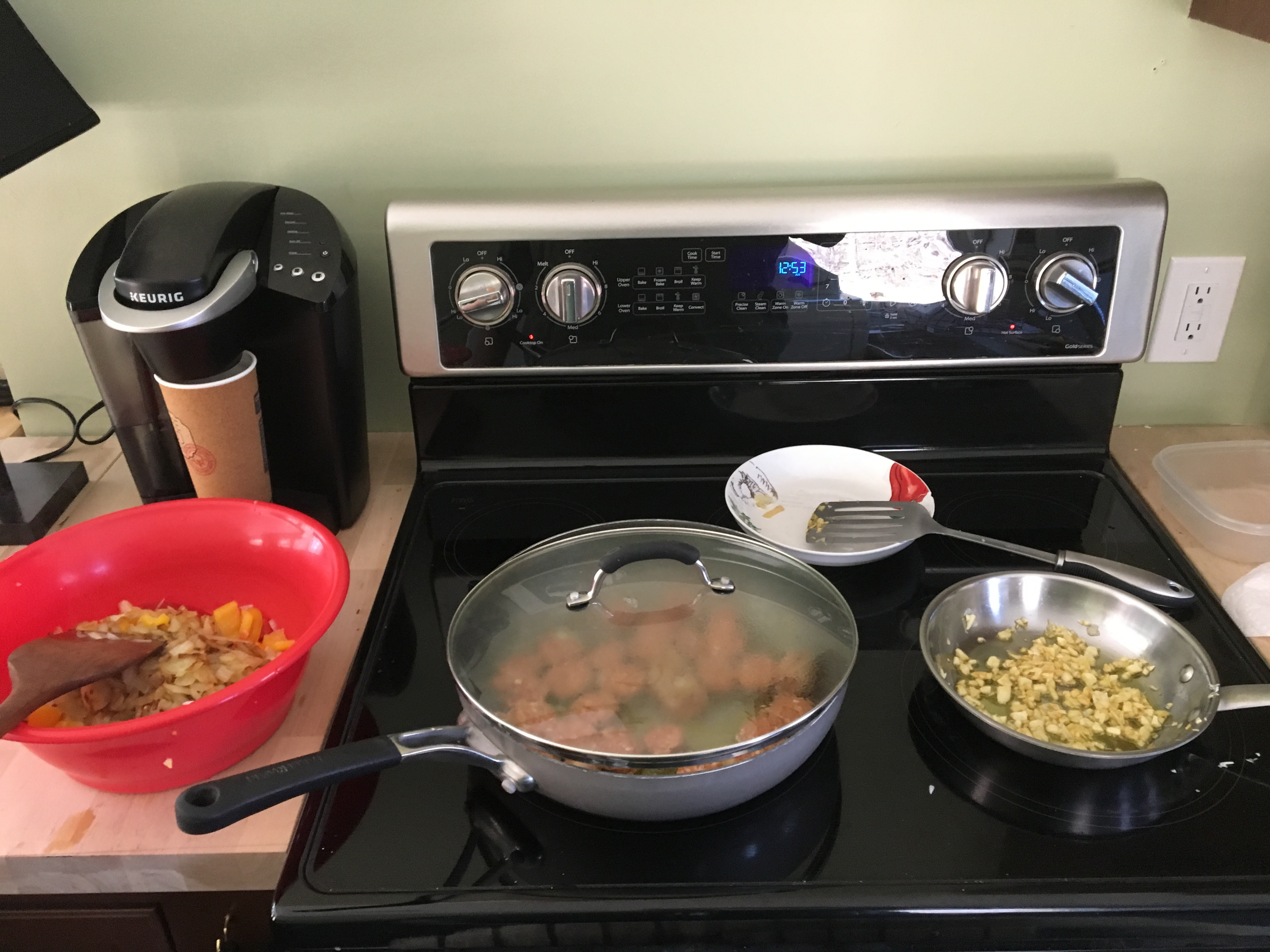 And some deer I wish were sausage. Not looking good for my daylillies this year since they seem to have already developed a taste for them: Finally got the first coat on a large portion of the counter. Needs six hours before re-coat, hoping Thursday before work, then Thursday evening to sand it with 400grit and coat again...then it needs 72 hours to cure. Once it's cured, I'll move on to the smaller area by the stove. And I'm not sure I'll get to painting this weekend, but I hope my sprained wrist will be good enough to prep the rest of the living room (take down the perimeter bookshelf and patch all the holes) and have it painted by the following weekend so I can move stuff back in from the pod!
Posted by Matt at 7:26 PM No comments:

The Will Spring Ever Get Here Picture Dump

It's been a looooong month since 3/13 (when we had a solid 18" snowstorm) of just complex problem after complex problem at work...or being sick. And no truck as they do a couple thousand dollars in repairs to it. I did capture some nerds in their native environment at work. Couple days after the ice fog was this weird, low cloud. I assume it's a contrail, but it was super low for a contrail. Trucks came back home on Saturday! Sunday is Tax Day and I needed a new printer...but hey cool, I can print direct from my iPhone to the printer! How do you break it to the fridge that while it wants me to replace the water filter, it isn't actually hooked up to a water source? Holy shit, did I clean the counter? Like just move a couple things and I could sand it and finish it? Oh yeah, time to work on taxes instead... Cable guys here to move the service from the temporary pole to the house. Called Friday, and got scheduled for 3pm Sunday o_O And move the location it terminates in the house while they're here. I will finish cleaning up the media center wiring later. They also had a cable company thing to do on the pole, removing a filter that they no longer need to have on the line. Matt Kivela, it's an old Indian word for "One who makes a mess."

But finally got to work on the electronics wall, fitting in the left over butcher block as I could. Easy enough to replace it again in the future as funds allow, although it didn't really come out that bad looking and probably will be fine once stuff is on it. Now of course I need to clean the rest of the counter tops so I can sand and seal them too.

This needs a second coat tomorrow, then it has to cure for 72 hours before I can start using the shelves. I got the smoke detectors installed last Sunday along with the last of the electrical outlets (except under the island)...but I waited till I got back from Easter at Pam's to actually flip the breakers on...I have such confidence in myself :D Next up: Find the remote control and power cord for the TV. *sigh*
Posted by Matt at 9:26 PM No comments:

Things I stumble across.

I listen to the Moth frequently, so there is a good chance I had heard the story on the radio, but I don't think they usually use full names identifying the speaker.

See if I can remember it all:

Basic house history:
-- Built originally at Groton Sub Base; Assessor lists it as 1949 but it is likely as World War II housing;
-- Moved after the 1955 floods to Putnam as emergency relief housing;
-- Moved to current site 1965;
-- Suffered serious fire damage in 1978 and was repaired at that time;
-- Minimum work (structural, electrical, plumbing) needed to make house financeable performed in 1999 (when I bought it).
-- Sauna was built during or just before World War II (I have a news clipping mentioning the bonfire held here on VJ Day). This is due to be rebuilt in the next round of work.
-- Summer Kitchen/Screen Porch was then built off the Sauna. This was torn down 2016.


2017:
House very much needed new shingles. In order to have a good surface to attach the new shingles the following was needed...or while we were at we might as well also do:

"Phase 2" to do after we get the mortgage refinanced:
-- Re-roof detached garage
-- New deck
-- Replace existing deck with patio
-- Rebuild sauna / storage shed