...forgot to take a mileage pic when I got to the hotel, so that'll have to wait till tomorrow.

Went further than planned today as hotels in Tulsa were full as it is the first day of the State Fair.

I was feeling pretty good, so I pushed on about 45 minutes more (OKC was 90 minutes) to Stroud. That's not too bad as it helps shorten what was planned to be the longest stretch tomorrow.

Original plan was ~8-1/2 driving time today to Tulsa, then 9-1/2 to Santa Fe. Left at 7:30, made Tulsa a 5pm to the hotel I wanted -- so 9-1/2 hours including my stops to stretch and get gas. Putzed around a bit in Tulsa, then found a hotel room in Stroud that seemed reasonable drive. So probably 9-1/4-ish hours driving the "main line" today and that will cut tomorrow to just under 9 hours driving.

So far, much of the trip hasn't seemed much different from the wooded Interstates I'm used to since I'm keeping along the southern edge of the midwest/great plains so far. Bits of Indiana and a stretch in Illinois was definitely flat farm country but the Missouri portion is mostly the Ozarks. Oklahoma is the most different -- I'm surprised by how many trees there were in the cattle ranch country; but the trees were definitely much more sparse and had thick grasses growing between them.

Much of I-44 in Missouri had a frontage road along it. Some of those looked like they could be the original US-66/US-166 road beds but I haven't finished researching that.

I kind of liked it -- no sharp curves, a few steep but not too steep hills (Pennsylvania/Ohio/Kentucky I had to watch for grades where my cruise control couldn't maintain speed); and a lot of commercial development / billboards at regular intervals so it wasn't just a monotone of trees.

I want to say you haven't seen ominous skys till you see an ominous sky in Oklahoma...but I was a few miles shy of the state line when this brief storm hit:

Photos may be running behind due to idiosyncracies with the iPhone updating with the MacBook over hotel wifi :/

Pictures will remain fairly boring for a couple more days as I try to just get out to New Mexico as fast as practical.

I had a thought of getting off the interstate to take a pic on side roads at the state lines as I crossed...thankfully I checked Google maps because this is the wonderfully scenic Pennsylvania / West Virginia border -- and that is U.S. 40!: 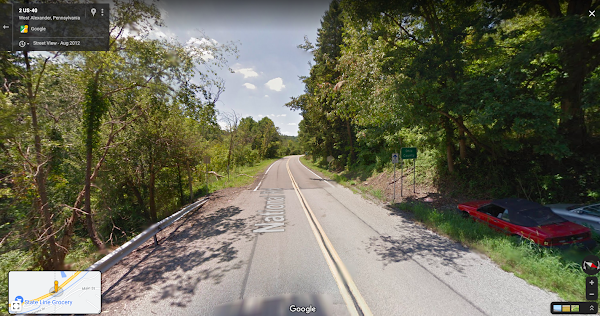 ...and the route I went the Ohio, Kentuck, and Indiana borders all involved crossing the Ohio River so there isn't second tier highways crossing it.

Cool railroad bridge over the Mongahela(?)

At the first rest stop, I re-jiggered what was in which bags a bit to make it easier for the hotel rooms. I'm probably a bit over packed (at least one bag too many clothes). There is also three grocery bags which are most of my food and sanitary needs for the month.

Resting my feet in Ohio (2nd rest stop break of the day, so about four hours into the day)...Ohio corn country just smells...different. Lack of woodlands maybe?

Resting my feet in Kentucky a couple hours later :)

Cincinnatti's highways...suck. And didn't look like any easy bypass of the city. Did I mention it sucked?

Meanwhile Louisville...this is 5pm traffic?! Smooth flowing other than some reasonable construction slowdown leaving the city. They Interstate was smooth flowing -- puts places like Cincy / Hartford / Springfield / Providence to shame.

Couldn't get a good pic (don't worry, was stopped for construction traffic)...Kentucky & Indiana Terminal Railway Bridge. Had (narrow) automobile & truck lanes on either side of the main span. I couldn't quite tell from what was on Wikipedia if this 1912 version of the bridge also allowed pedestrians; the original version was conceived to support trains, trolleys, horse-drawn vehicles, and pedestrians.

Did run through a few spots that they were combining corn. The dust they kicked up tastes like the taste you get walking by silage, but a very dry silage :D

...had to stop at Willimantic Harbor Freight for one more bag (my toiletry bag was over stuffed...), and then by the time I reached Columbia decided I really couldn't make this trip without being able to stream from my phone, which in my Jeep isn't something it can do over bluetooth despite bluetooth supporting the phone just fine.

That Hilux is a bit out of place in North America...

Bought a nice M.O.R.E. oil pan/transmission skid plate -- and quickly realized this wasn't going to be easy to install on my back in my garage. The garage around the corner (Integrity) had a sign up they install lift kits, so I asked them to install it.

And I also got a heavy duty cross member for the transmission; when I crawled under for an oil change realized it had been beaten to shit and probably couldn't mount the new skid to it o_O

Next spring I'll work on upgrading the fairly thin factory skids on the transfer case and gas tank with the M.O.R.E. skids. (For comparison, the Mopar transfer case skid is a bit under 15#, the M.O.R.E. is 27#.)
Posted by Matt at 8:08 PM No comments:

Taking care of a bunch of stuff before the big trip...

Photos taken over the last couple of weeks.

New Sneakers. 33", would've liked 33-1/2" but they're short supply nationally. Sorel's couldn't get any from their distributor, Town Fair had 33" in their own warehouse.

Putting together an electrical kit -- found a USB chargeable multimeter so I don't have to worry about batteries (much).

Had Sorels fix a check engine light and do a multi-point. They identified drag link ends, front brakes (which I had pads from Rock Auto I bought over a year ago...so I'm thinking I knew and forgot I needed to install them :) ), and rear pinion seal. Did the first two, needs to go back for the seal.

That tool worked well -- $20 from Harbor Freight. Used it to put tension on the bolt, then did the "two hammers" trick for ball joints and whacked them several times while tensioned. Put a wrench back on the tool, it was noticeably looser and just a few turns the ball joints popped right off.

Alignment guy had to drill out the bolts for the steering stabilizer :/ Got new ones from NAPA.

Re-organizing the stuff I usually have in the back to areas more out of the way, particularly for the trip -- as long as it's below the top of the seat bench, when you fold down the back I won't have to move stuff.

The blue bag is the electrical kit.

Looks like they're building a new substation to handle the power from the new solar farm on the Brooklyn / Canterbury town line.

The curtains are curtains...I can slide them on the parachute cords for privacy while sleeping.

Hiking poles tucked up out of the way.

Bottle jack (tested that it can lift the Jeep high enough to change a tire, supplemented by a 2x4. Figured out you can fit 9 2x4 pieces about 16" long under the passenger side rear seat.

You would think they would have updated hide-a-key to the 21st century by now...