First day of Spring today...first time I've been in the woodlot since early in January when the snows started.

Had planned to drop more trees but the oil cap on my big saw (MS360)broke and all the dealers around are closed on Sunday!  So I blocked and hauled down to the yard more wood then I planned instead.

A Red Oak with the Box Elder sitting on top of it (the Red Maples to the left if you look closely).  Counted 54 rings on the oak, surprised me a little bit but I guess that's about right, the land was pasture up until around 1950.  I was expecting it to be more like 60 to 70.  I do have some "middle age" pasture oaks up in there.

My small saw, the 024AV earned it's keep.  Three full gas tanks plus a little.  Had my least favorite chain I own on it, some sort of safety chain.

Both clumps of grove of ratty Red Maples in the background, left side I had been planning to take down today before I was done in by a flippy cap.

Two loads this size, plus one smaller load, to collect everything in the pics above.  I'm figuring when it's split, I'll be close but not over 3/4 cord that I hauled down to my house today.

My grandfather Arvid Kivela, my uncle Bill on the scooter, and my father Rudy.

Update:
I posted that photo on a firefighting site I'm on frequently that I knew had a decent number of New Yorkers...and a one guy from Colorado gave me a strong lead --

It may be the Morris-Jumel Mansion: 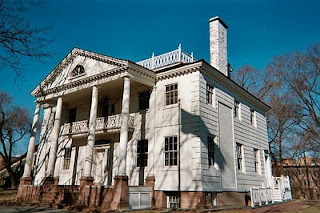 I hate this escalator.

When I was five or so, I was with my dad when I fell at the top of this escalator and rode it most of the way down prone -- terrified. Very vivid memory of watching the bottom where the teeth are as the escalator disappears under the floor get closer and closer. Plus I lost my lollipop, I can still see it trapped at the bottom as the escalator rolled underneath it.

It was a very long time -- into my 20s -- before I could ride an escalator again without gripping the rails so tightly I got white knuckles.

AUBURN — A 4-year-old Dudley boy died last night from injuries he suffered when he fell from an escalator at Sears Friday night.

The boy, Mark DiBona, was pronounced dead before 10 p.m. at UMass Memorial Medical Center — University Campus, according to the district attorney's office. The child's parents are Eric and Laura DiBona, authorities said.


The boy had been with members of his family and a friend as they shopped in the mall when he fell from the escalator on the second floor inside the Sears Department Store Friday night.

Authorities said the boy grabbed the moving railing of the down escalator with both hands and was pulled off the escalator and through a 6-inch gap between the escalator and a plastic barrier. The boy fell onto a store display case on the floor below and suffered a severe head injury.

At least a week, probably more like two before I can start working the garden!

That's OK, I was sizing up the woodlot today and picked out a bunch of junky trees I can cut down next weekend.
Posted by Matt at 8:50 PM No comments:

Everything you really need to know about Finns & Conversation...

I stumbled across the post by Hank W. below today, and found myself chuckling away as I read it:

I am really tired of all these complaints on the difficulty of learning the Finnish language.

The easiest way - and hardest for most foreigners - to learn the Finnish language is just to sit down and shut up. Over than half of a Finnish conversation is silence. You can practice *that* on a city bus for example. See, only mad people talk to strangers (or themselves). OK, I need to rephrase that - only mad people used to talk to themselves. Coming back in 1996 just after the 'kännykkä' boom and seeing well-dressed people blabbering to themselves freaked me out. Once I got new glasses the little dangling cord from the ear became more evident. Still freaks me out though. Must be hereditary.

The theory is, that silence has etched itself into the Finnish genes. Probably this happened already during right after the Ice Age when the Proto-Finns moved over and found it feasible to keep their mouth shut and use the energy for keeping warm. The blabbermouths then froze on the lake ice when they were icefishing (its quite windy on a lake). The silent men then slid the ones frozen stiff with their mouths gaping under the ice. And their hearts felt warm, and nobody said nothing, because everyone was thinking the same thing, peace at last.

So a couple thousand years later trying to introduce polite small talk instead of the cavemanlike grunts causes native Finnish speakers to seem rude and impolite. Every foreigner in Finland is bound to be asked these two questions let it be he's been here one day or ten years: "Where are you from?" and "What are you doing here?". Now these questions are honest to God attempts of "small talk", which is some unnecessary foreign invention. As we all know, peoples' faces in Finland are solemn, the mouth is a straight line, the edges slightly pointing downwards, just like a mouth should look like. (Only angry dogs and Americans show their teeth when meeting people.) - so a friendly question like that asked with a straight face is really just trying to be friendly. It is not exactly *our fault* the practice is to "cut the crap" and tackle the issue. So then the funny foreigner takes offence and the Finn is even more sure that silence is better and staring into the bottom of the beer glass is quite the thing to do.

Ah, one thing I must add though. The silence is gender-related. Somehow the silence genes are attached to the X and Y chromosomes because in Finnish women there is a wonderful and frightening ability to talk sentences without pausing, inhaling and exhaling the vowels and consonants so that the speech continues as a steady flow of... andreallyIthinkthatyoushouldcleanupafteryoushavethesinkisfullofhairsandthenthemirrorisstainedandyouleftthetoiletseatupagainhowmanytimesdoihavetotellyouaboutthatlikeIhaventtoldyouthatathousandtimesanditisdisgustingreallyyoudonotseemedoingthatnowdoyou...
Now this can also be used to explain the suicide rate of Finnish men, why there are 10:1 ratio of women to men in the 65+ age groups and why Finnish women marrying foreign men are so happy. Well, the first case is self-explanatory, as it relates to the second. The fast way out is far more desirable apparently than the slow lingering "death by nagging". And foreign men are happy as they cannot understand a word - and as Finnish women (due to the vindictive school teachers) dare not say too much in a foreign language as they are so afraid to make a grammar mistake the naggedyness in a foreign tongue is less evident. Divorces only happen if the men learn Finnish too fluently to actually pay attention to what she is saying...

So basically, the Finnish language is the easiest to learn in the world. Learn the silent parts first.

First time since mid-January I'll be able to have mail service at my house again now that the snow banks are gone so the postman can pull up to the mailbox.

Still have about 6" to 8" of snow on my front yard, but that's about the deepest other then snowbanks around. I wouldn't have tried pulling into the woodlot off of Prince Hill Road on Saturday; now I just have to wait for the ground to drain since there's only a small patch of snow left. The garden is almost visible again!

We have survived the Great Snow of '11!

Edited to add: Heh...the mail lady just stopped and dropped off all the mail instead of stuffing it in the box :)
Posted by Matt at 2:35 PM 1 comment:

Let's preface this by saying I once walked into the firehouse and the gang their got sheepish faces...they had been reviewing the best falls I've taken on fires caught on video tape (some I remember, some I forgot...). Apparently one of the youngbucks had made up a list of which minute on which tape to watch.

So tonight I go out and fill up my firewood cart with wood.

There's one step I have to go down with the cart, so I pull back on it to slow it as it eases over the step...

My arms stay in place, my feet slide forward, I end up sitting keister wondering what the heck just happened.