Have more peas, debating what I should do to plant the rest. Maybe some fence posts to hold up trellising?

I also put some Mountain Laurel into a nursery bed. We'll see how that works out...if the roots take, I can transplant them to their permanent location next year with minimal trauma to the roots.

Can't figure out how I want to start organizing my information on brush fires.

A blog? Was playing with www.d90.us/wooden_nutmeg as a WordPress blog.

That seems to be going well.
Posted by Matt at 8:39 PM No comments:

Cover the thousands who sleep far away--
Sleep where their friends can not find them to-day;
They who in mountain, and hillside and dell
Rest where they wearied, and lie where they fell.
Softly the grass-blade creeps round their repose;
Sweetly above them the wild flow'ret blows;
Zephyrs of freedom fly gently o'erhead,
Whispering names for the patriot dead.
Cover the faces that motionless lie,
Shut from the blue of the glorious sky;
Faces once lighted with smiles of the gay--
Faces now marred with the frown of decay.
Eyes that beamed friendship and love to your own;
Lips that sweet thoughts of affection made known;
Brows you have soothed in the day of distress;
Cheeks you have flushed by the tender caress.
Faces that brightened at War's stirring cry;
Faces that streamed when they bade you good-by. Faces that glowed in the battle's red flame, Paling for naught, till the Death Angel came. Cover them over--yes, cover them over-- Parent, and husband, and brother, and lover:
Kiss in your hearts these dead heroes of ours,
And cover them over with beautiful flowers!
-- Will Carlton
Posted by Matt at 1:47 PM 1 comment:

How hopped up on cough syrup am I?

I've been miserable, on and off, for the last 10 days.

First a 24 hour plus a little bit flu on Wednesday, then a mild fever Saturday night even though I deliberately took that day easy. Cut a very little amount of firewood on Sunday just desperate for fresh air...and I've had a cold all this week...which has now turned into full blown laryngitis.

I have a habit of re-using the 32oz juice bottles when I buy them a water jug for a week or so (rinsing / washing of course). So today I grab the empty from my desk, fill it half with water, go to the fridge, top it off with orange juice.

At which point I find myself thinking, "Huh, they mislabeled this. It's clearly orange juice, but the container says it's Ruby Red Grapefruit." It honestly took me a minute to figure it out.

To think I went for a long drive today and bought a copy of Audobon's Field Guide to Trees. And I'm not even on the good stuff for cough syrup, just plain old non-drowsy formula.
Posted by Matt at 2:55 PM 1 comment:

I'm not even sure how or why I stumbled upon this book in Google:

The use of 'nightsoil' or human manure immediately springs to Western minds when Chinese agriculture is mentioned, and although it may occasion considerable repugnance to us, to the Chinese it was an obvious and simple way to return fertility to the soil, the validity of which emerges clearly in modern chemical analyses.

(It goes on to note that this practice has probably aided greatly in maintaining fertility in China; compare this particularly to long-term declines in other bread bowls like the fertile crescent and the Mediterranean)
Posted by Matt at 11:12 AM 1 comment:

Soon after I started working at the T&G I knew enough about the revenue side to seriously question what was being paid for newspapers.

Assuming you're looking for a 10% return on investment on capital, and need to achieve that from ongoing operations, then most I could see a newspaper being worth was around $1,000 per unit of circulation. Unless you're running a Ponzi scheme, that's the only way you truly make money in the long term -- from the underlying business earnings.

If you took the difference between $1,000/circulation I figure was a fair value and what was paid for these papers and bought investment grade securities earning 4% instead, today Hearst would have $250 Million extra in the bank and Times would have $1 Billion extra.

With the Chronicle losing $50-70M in 2009, that $250M combined with reasonable business cost cutting would by them 4, 5, 6 years to weather this economic storm.

The Times currently has $1.1 Billion in debt -- including $250 Million in a loan from a Mexican businessman at an unbelievable 14% interest rate! Had they not overpaid for the Globe and T&G, they could be nearly debt free today. Had they not built an new headquarters building...they too would have several hundred million in cash and investments on hand.

These bad decisions have now hamstrung the old media companies.

Given changes in the business since then (collapse in advertising) and substantial risk, off the top of my head I wouldn't value a newspaper at more then $400/unit circulation today. That price gives you some ability to see your investment appreciate -- if things turn around with the economy and the industry, you might see $500-600 values be reasonable in the next 5 years or so.

For the T&G, I suspect the analyst didn't credit the T&G's modern printing plant in Millbury to the T&G -- figuring it's worth at least $12M and shifting that value from the Globe to T&G...both papers end up right around $400 per unit circulation. So I think I still have a good handle of newspaper values, MBA or no MBA. :)

Can you make money in newspapers today?

First step though is to run them through bankruptcy. They're carrying debts that are not supportable by their underlying value, and those have to go. Even in cases where just enough cash can be squeezed to make loan payments, a realistic valuation of assets is likely to trigger convenents to call the loans. Executives made bad decisions, investors made bad decisions...bankruptcy is the way those mistakes are corrected.
Posted by Matt at 11:27 PM No comments:

I worked at the Worcester Telegram & Gazette for a bit more then five years. The T&G was grouped together with the Boston Globe as the New England Media Group by their parent organization, the New York Times.

It was my favorite job ever and I doubt I'll ever have one that combines the interesting challenges with the terrific co-workers I had. Newspapers have a surprisingly complex workflow where many different, discrete pieces are brought together to produce the final product. From an Information Systems perspective, it's a really mentally stimulating industry.

Today clearly it's an industry circling the drain. While the industry would've been challenged by the economy and techonological changes, the true yoke around it's neck is the debt levels taken on over the last 20 years -- an example of the widespread use of capital in the U.S. in unproductive ways. Even when parent companies spent cash to buy other newspapers they did so at the cost of not making other, wiser investments. Money being spent to spend money, rather then careful and considered investments.

Does make you wonder how much greater our productivity gains from Information Systems over the last 25 years would've been had we not had so much poor and unproductive money shuffling going on.

Today TIME came out with an article on papers likely to go under soon, they figured 8 out of the following 10:

Some I don't believe will disappear -- the Boston Globe needs a serious Chapter 11 bankruptcy reorganization to say the least, but it's a media market that needs someone to serve it.

My experience with the San Francisco Chronicle is only secondary -- they sold the T&G to the New York Times about a year before I joined the T&G. What I saw coming into the T&G is the past owners had been too frugal -- milking the profits while not making reasonable investments to improve efficiency. Assuming the Chronicle was run with similiar tight reins the most reasonable assumption to explain their current predicament is the debt load from Hearst's take over of them -- $660 Milllion for a paper with a circulation of 480,000.

How about look how quickly the snow is melting!

It pretty much disappeared overnight... 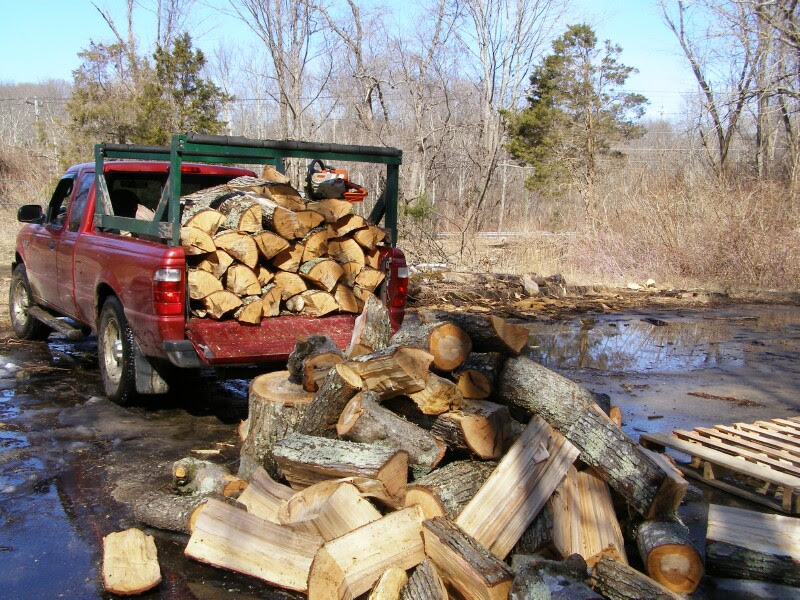 And by the afternoon load of wood, even the puddles had mostly dried up! 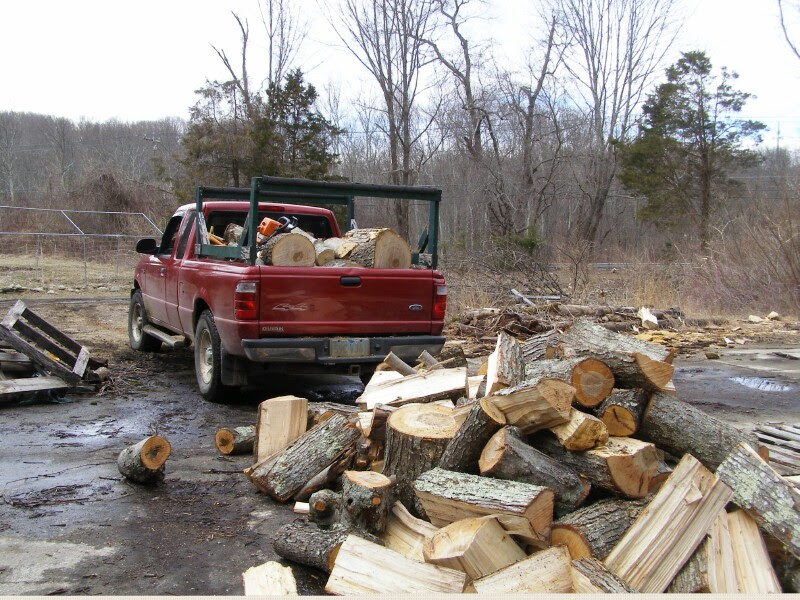 It was 60º today and absolutely gorgeous. See a post that wasn't about wood :)

Oh, but I do want to mention racks:

Saw these online today, looks like a fantastic design -- although I'd like a pitch to the roofs personally: 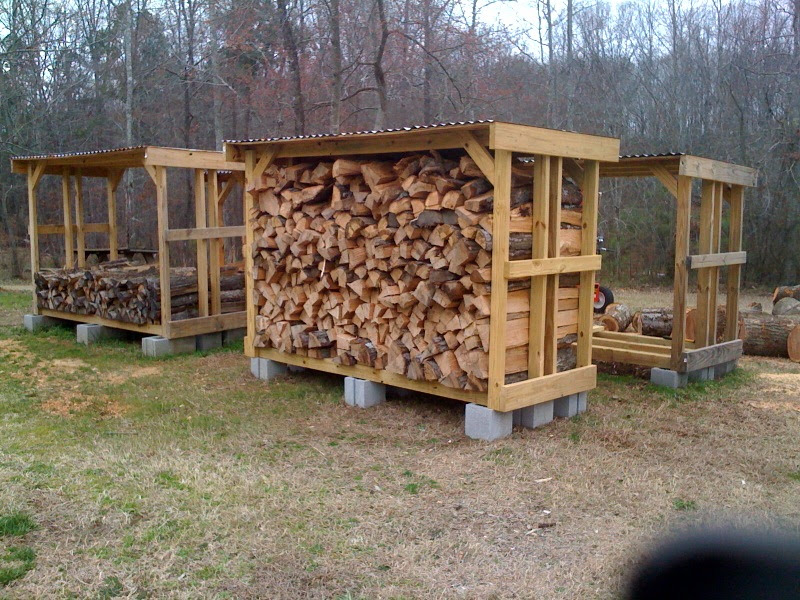 This should be the first load for the 2009/2010 season.
Hopefully get ahead of the curve this spring so I have nicely seasoned wood all season. I have another load this size to bring in tomorrow morning then I'll split it up to useable size and stack on pallets this week. 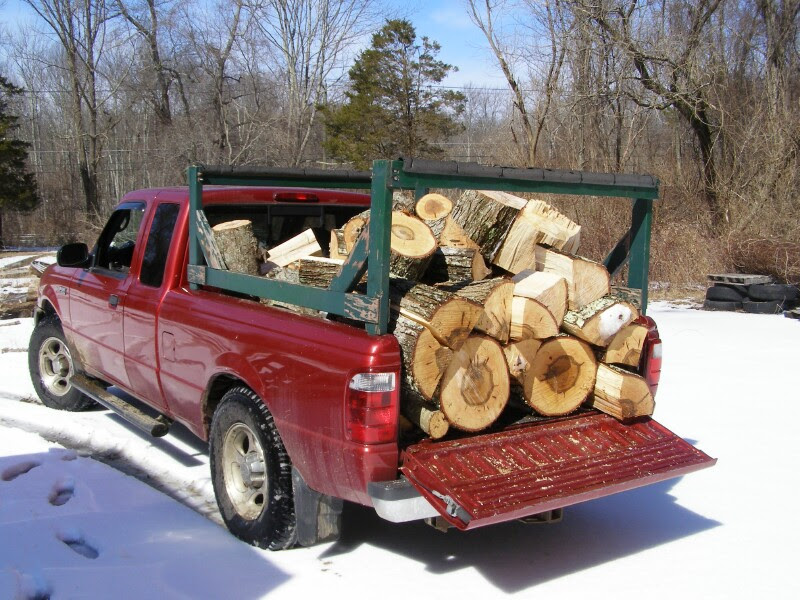 A special post just for Rebecca since she gets a chuckle out of my wood. 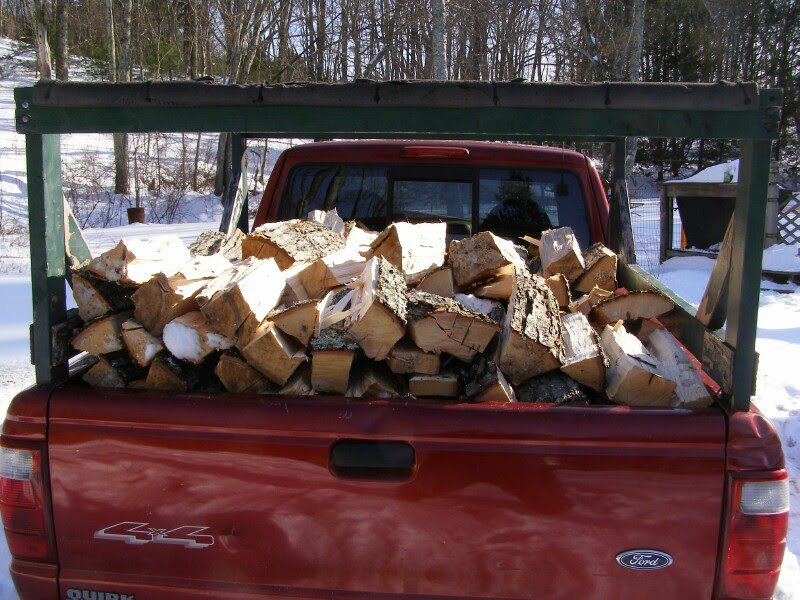 Cutting up a couple swamp maples (probably Silver Maple or a Red Maple / Silver Maple hybrid) near my house. Trying to get them done before the thaw sets in in earnest this weekend! That's a solid 1/4 cord in the bed. Might be the last I need to split this year, depending how mild March and early April is I may have enough wood to make it through the rest of the year now.

Makes clean up of the rest of the trees still on the ground pretty quick since I can just haul the whole logs over to the woodpile and leave them there to split later.

Notice...there's snow on the ground again. Had 9" on Monday, mostly between midnight and dawn.
Posted by Matt at 4:49 PM 1 comment: