Just a light wind blowing through the trees now in the aftermath of Sandy.

Took a walk down to the garden with Oscar since it wasn't raining...gorgeous night out there. Comfortable fall night, hardly a car on the road, all the neighbors have power so there isn't a generator to be heard.

Preliminary damage assessment by Maglite showed one tree down, across my driveway by Route 6 but where I can drive around it on the grass so I won't have to cut it up till the weekend. I had parked my car down by the garden where no trees could hit it, but I never felt worried enough to move the pickup down there too.

CL&P lists the town as 52% out of power which surprises me. 476,000 customers or 38% statewide -- Hartford Courant reported they had anticipated 300-600,000 so I'm guessing before sunrise they'll go over that since I bet they won't fix anything overnight and the west side of the state still has a few hours to go. 800,000 was the mark that they went over in the Halloween storm and approached in Irene last year. 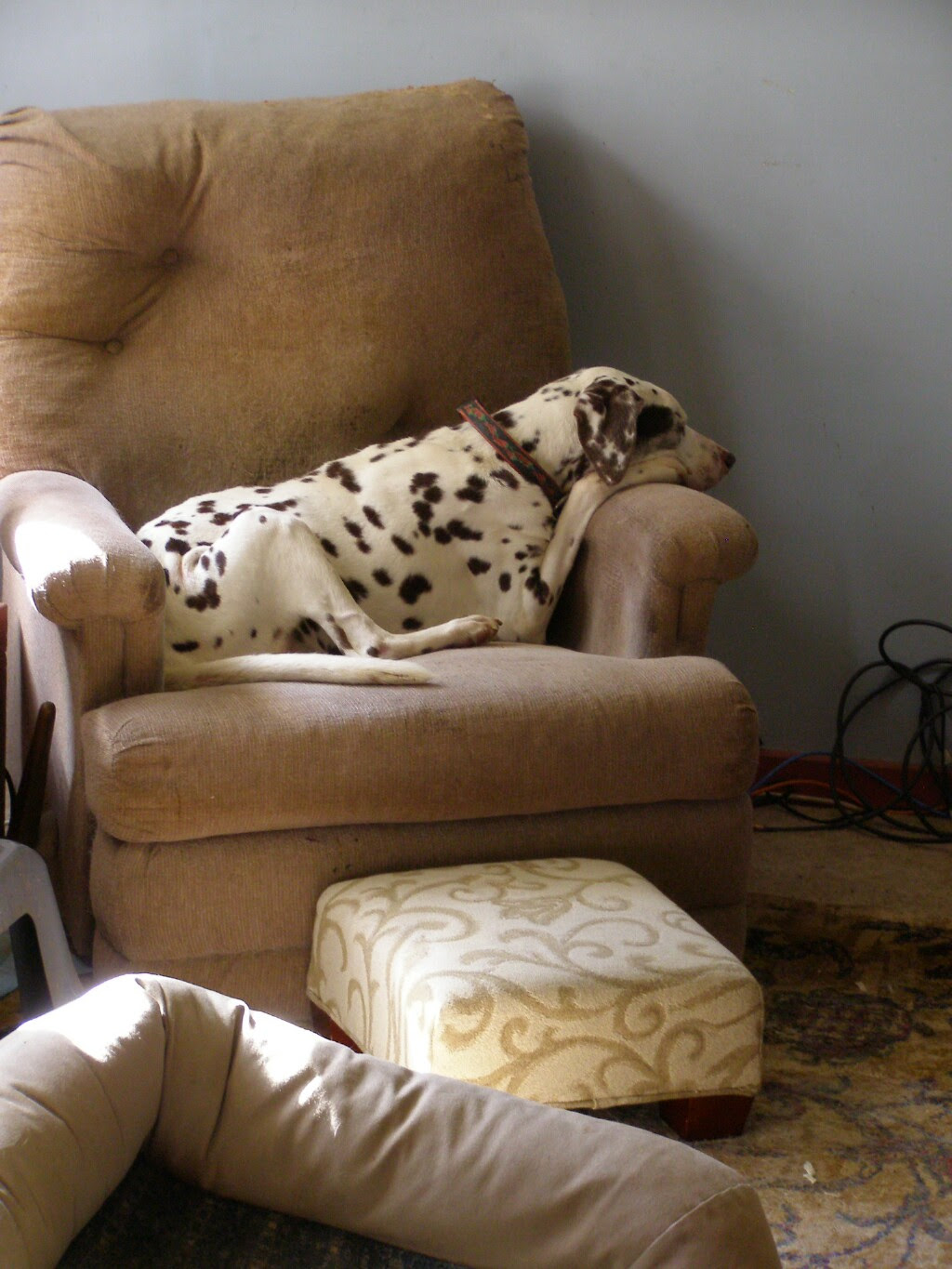 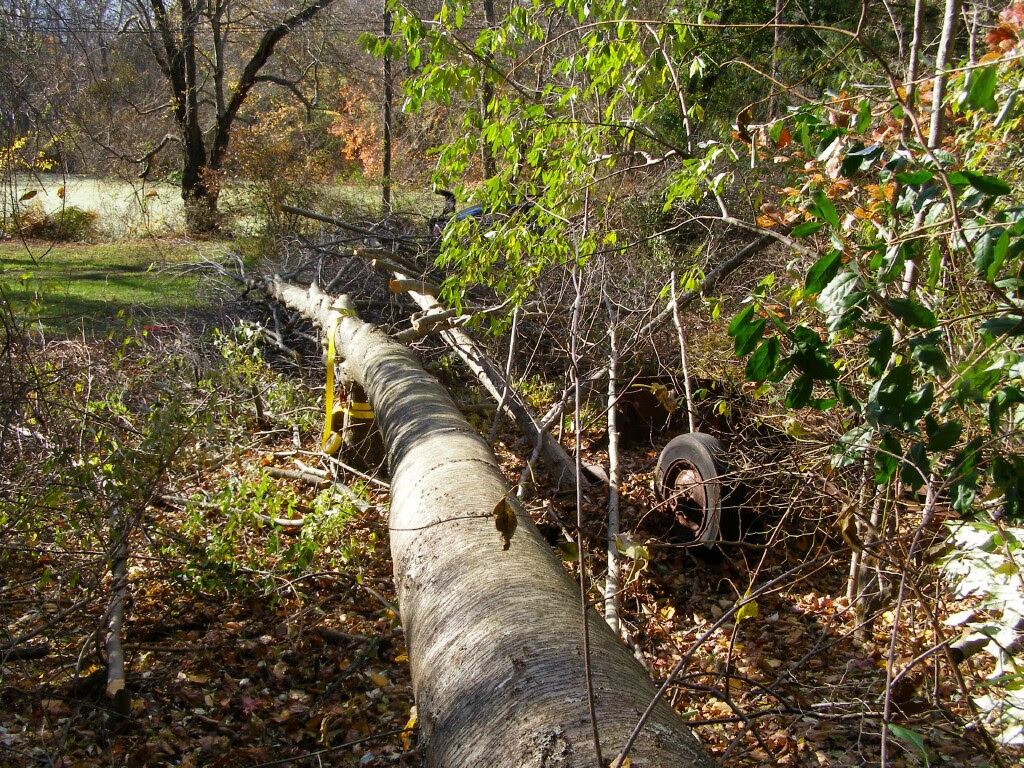 The intention was to drop it about 6" further left...and I hadn't pondered the implications of not cutting down the stump first. Plus I caught a 4" tree in a bad position that I couldn't quite figure out (without being in a bad place) whether it was an oversized spring pole, or it was the root ball being pulled up was the major factor. 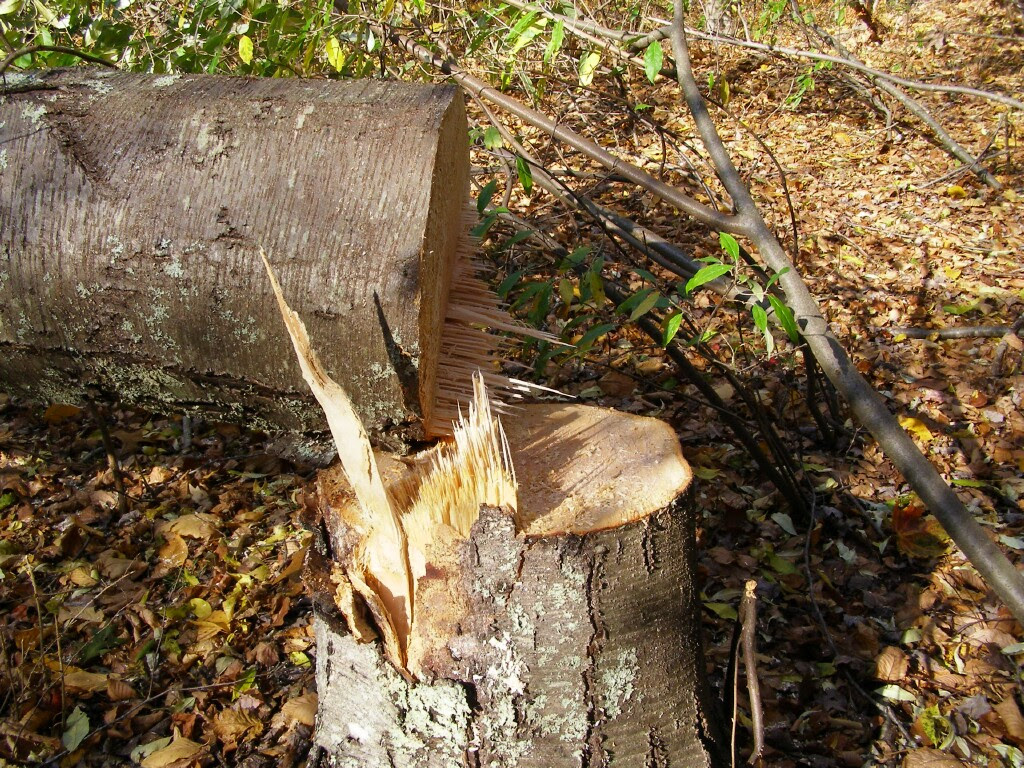 Notch was OK, I could've done better. Hindsight I would've aimed a bit further to the left, but it was aimed where I intended when cutting.

The back cut isn't my best work I was thinking too much about how to cut it to swing the tree and didn't cover the basics, so it was slightly angled and a bit lower then it should've been.

BUT...it pretty much did what it was supposed -- the tree had a slight forward and moderate side lean and I watched as the tree started to fall, then spun around to the left to come down (almost) where I needed it. First time I've made...deliberately...a directional(?) cut which spins the tree around.

My cutting the hinge not even but so the side away from where you want the tree to pivot is cut first, the tree starts to fall but then the thicker hinge holds it and it swings towards the thicker hinge (the pulled wood in the pic).

A bit surprised Henry didn't come over to make sure I was OK because I let out a heck of a war whoop in celebration afterwards.

Normally I would've just started working on the top of the big tree and when I got to where it was up on the second stump I would've taken the peavy and yanked it off.

But I had the matter of that spring pole and not being quite sure what it was going to do or causing on the main tree.

My solution was to use a couple 2" ratchet straps. One wrapped twice around the stump: 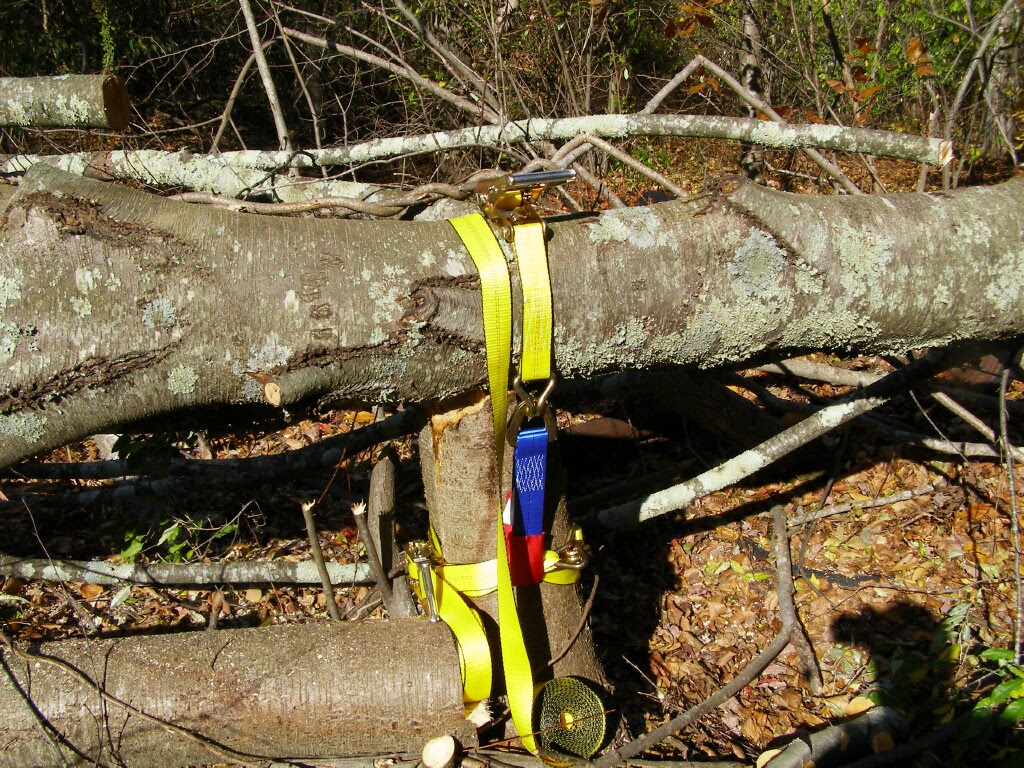 The other went over it. I only had one sling, so I had to directly hook the other strap. Another sling is now on my shopping list :) 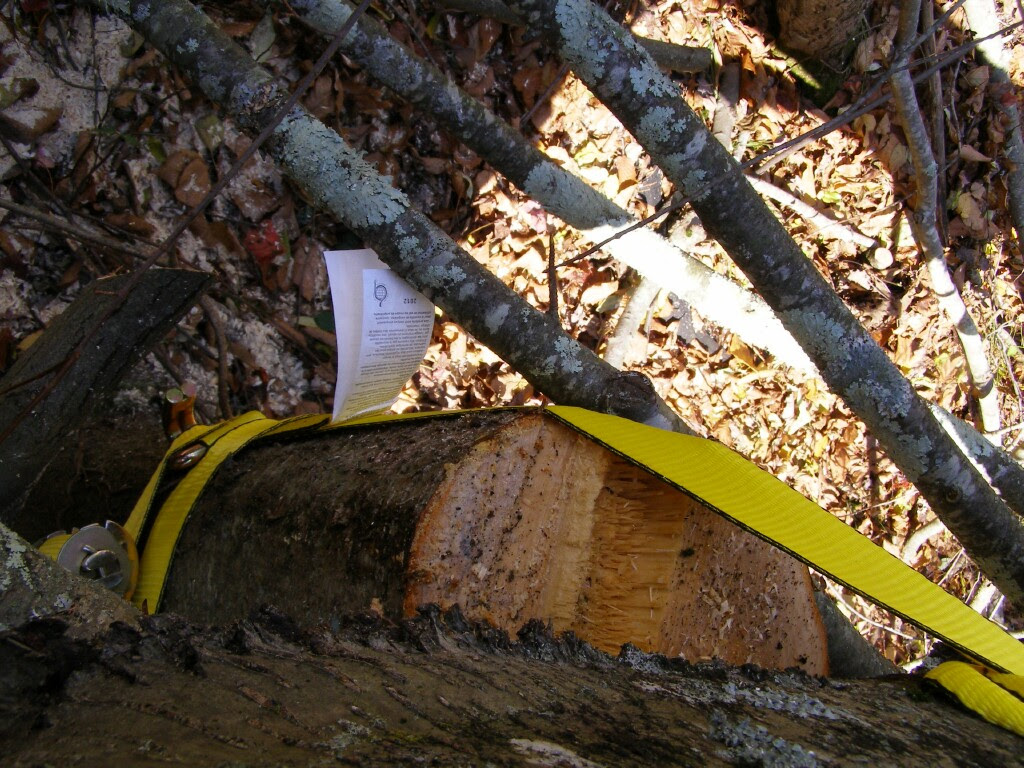 Once I got to the 4", it wasn't too bad after all. The small root ball sat back in it's hole a bit, that was all. But better safe then sorry.

Now, I still have the top to deal with: 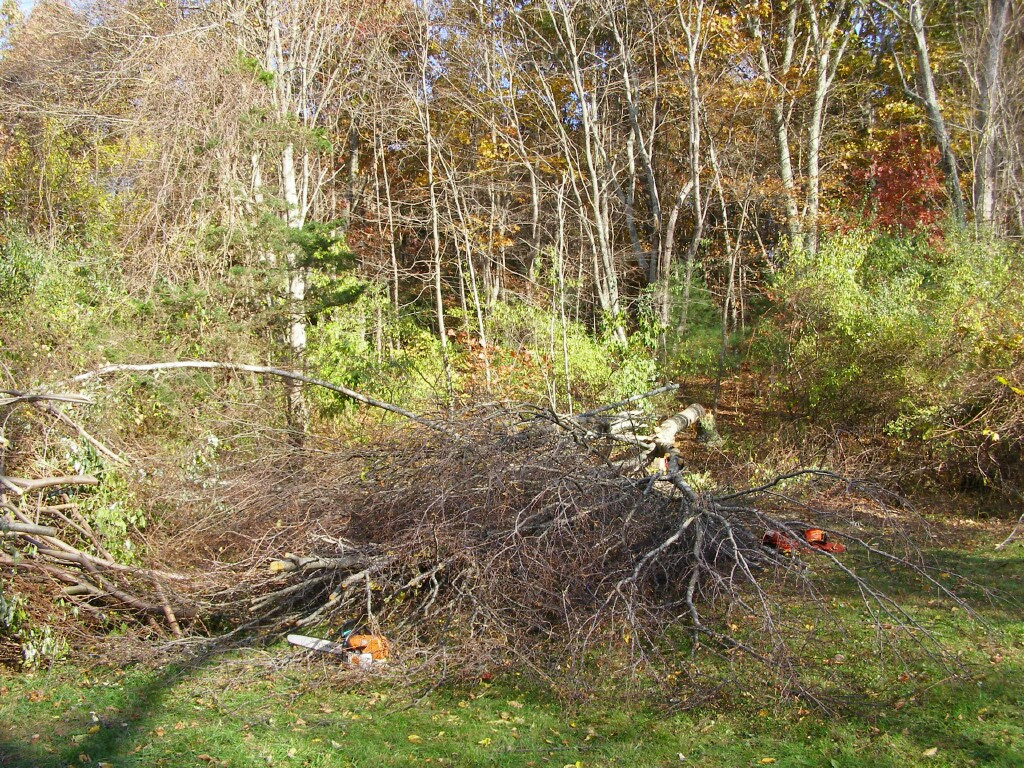 Which was tangled up with grape vines...so I spent a lot of time in chaps and a pair of pruners in my pocket. Saw some top, clip some vines, throw on brush pile, repeat. What a pain.

This was when I finally ran out of gas. It was getting dark enough I decided to leave the rest to finish up this week.

The big birch's natural lean was towards that cedar tree, so I am very happy to have swung it around as much as I did :) 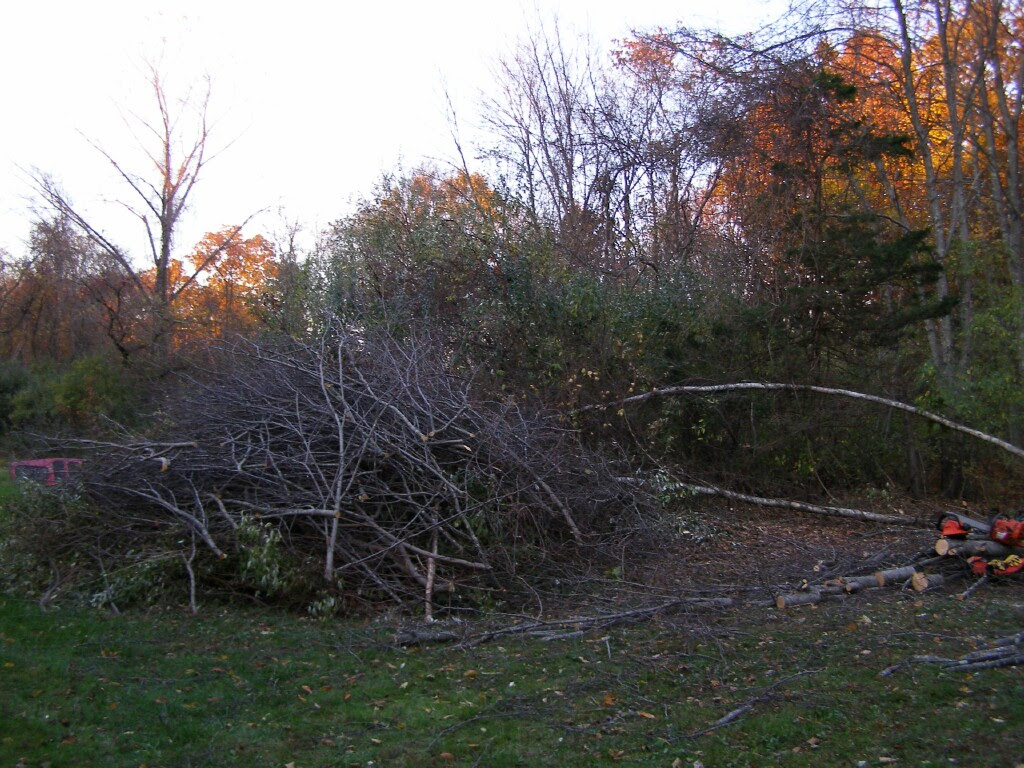 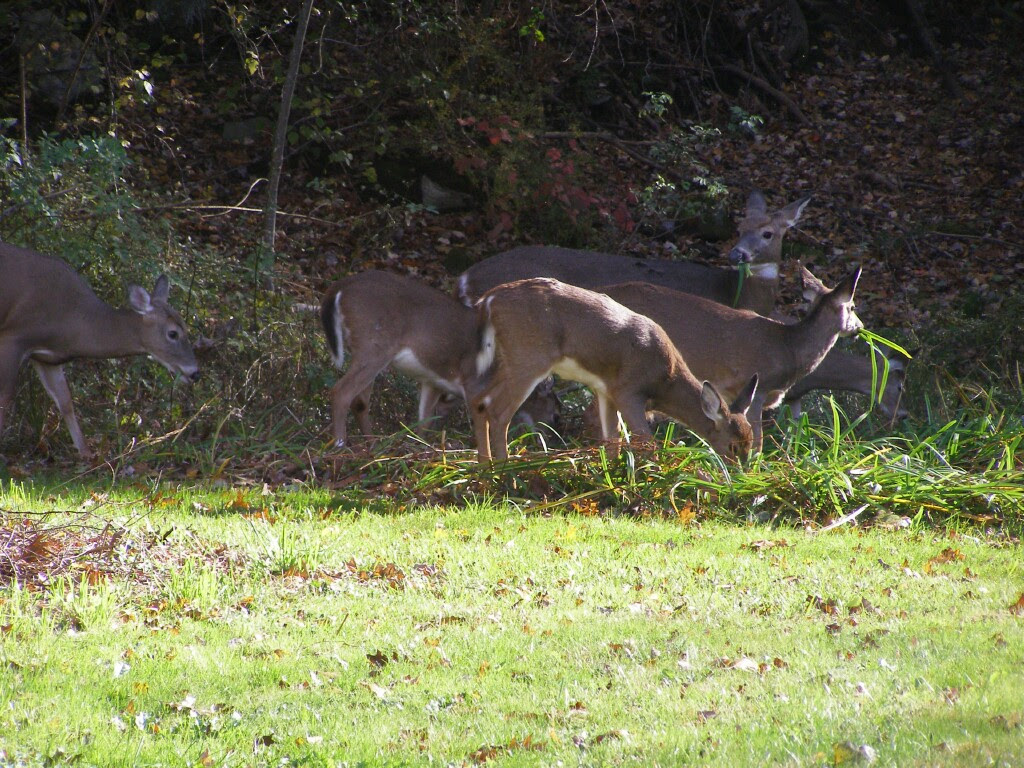 This does not bode well for pressure on the garden and flowers next spring.

Stopped at Tractor Supply...true to form, they didn't have the item I was looking for. 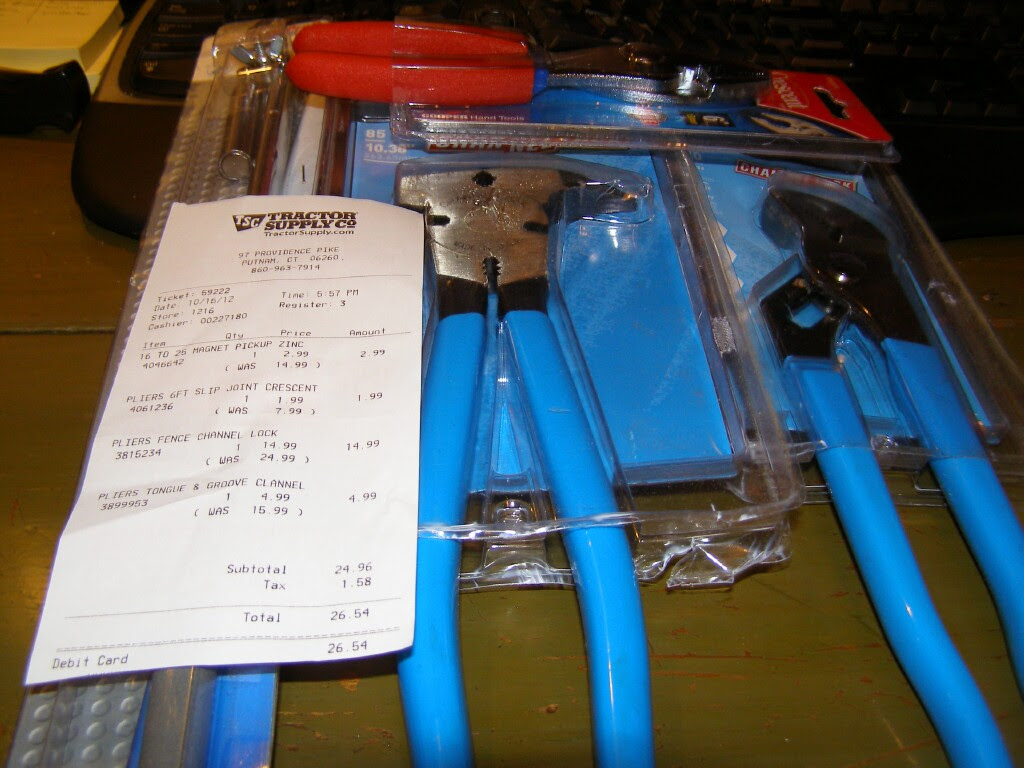 Coming out, this awesome truck was parked next to me...oh talk about a fun toy to have :) Probably channeling my inner ten year old from one time my dad had a small bucket truck as his take-home vehicle from the phone company instead of his normal Chevette or Courier he'd get when assigned away from his normal garage...and I got to go up in the bucket and zoom around. 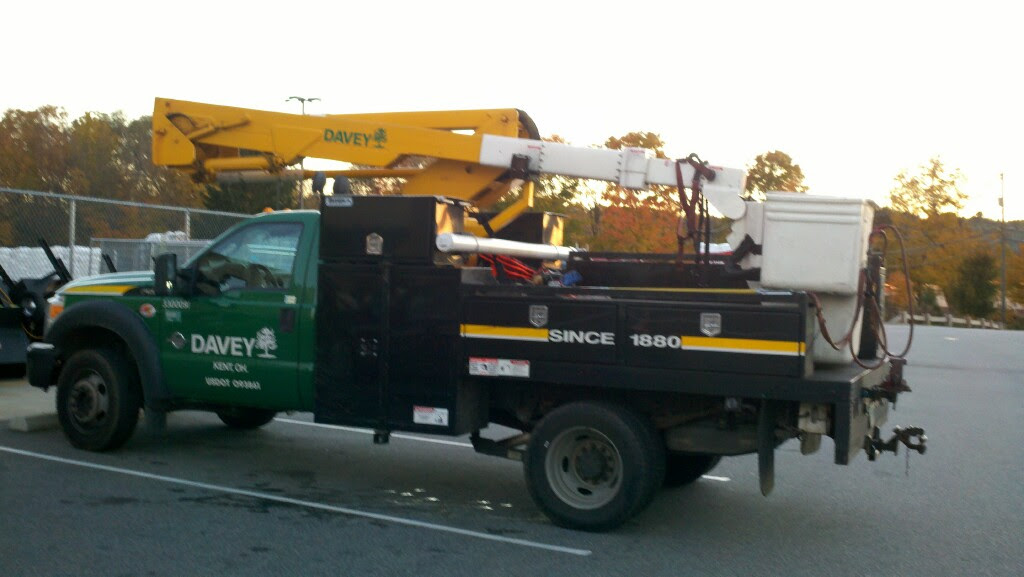 But what totally made me chuckle is they named the truck (haven't seen that on a national tree service truck before) the "Noisy Cricket." What a great Men in Black reference. 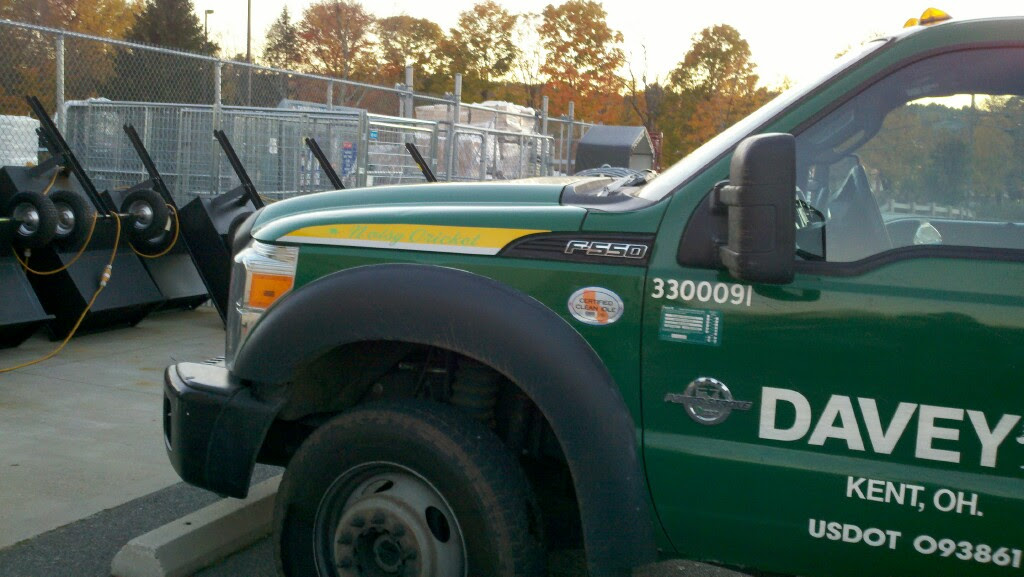 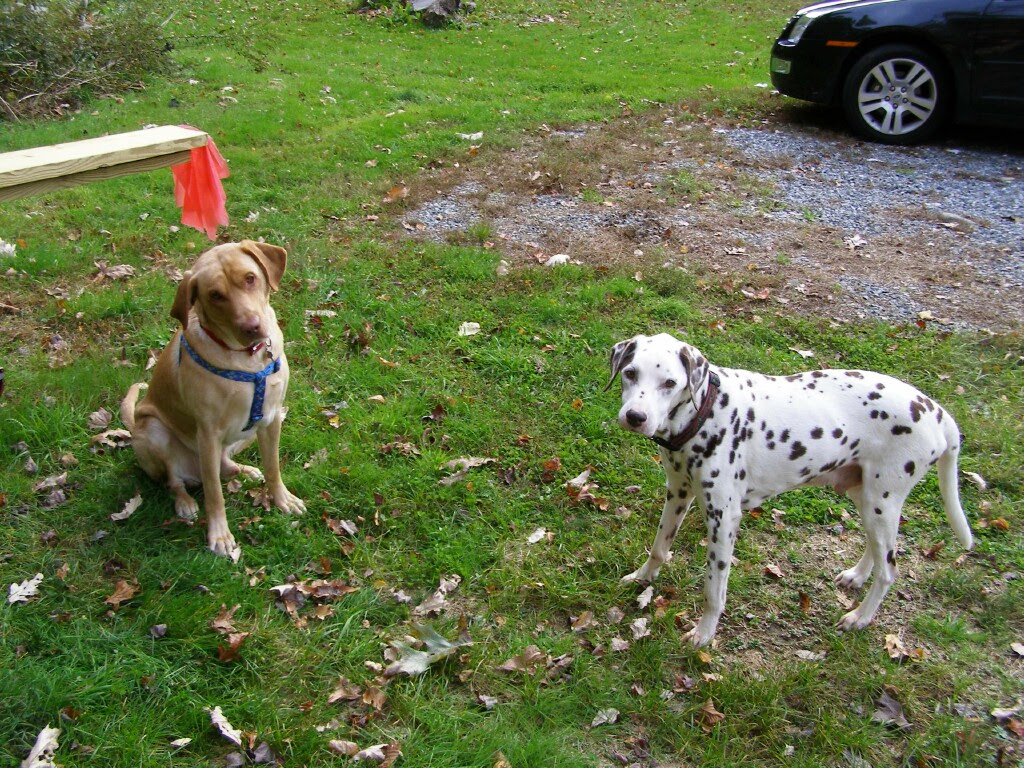 Cooper first wanted to play with Oscar (who wanted none of that, especially since it was 11pm at night when they were introduced.) There was more tail wagging then not. I had to make sure Cooper knew who was boss...finally by the last time Oscar growled at him for excessive butt sniffing, Cooper just ran to me and put his paws in my lap.
Cooper spent most of his ~40 minute ride (we went the scenic back way) looking out the windows, and was none to excited to get home: 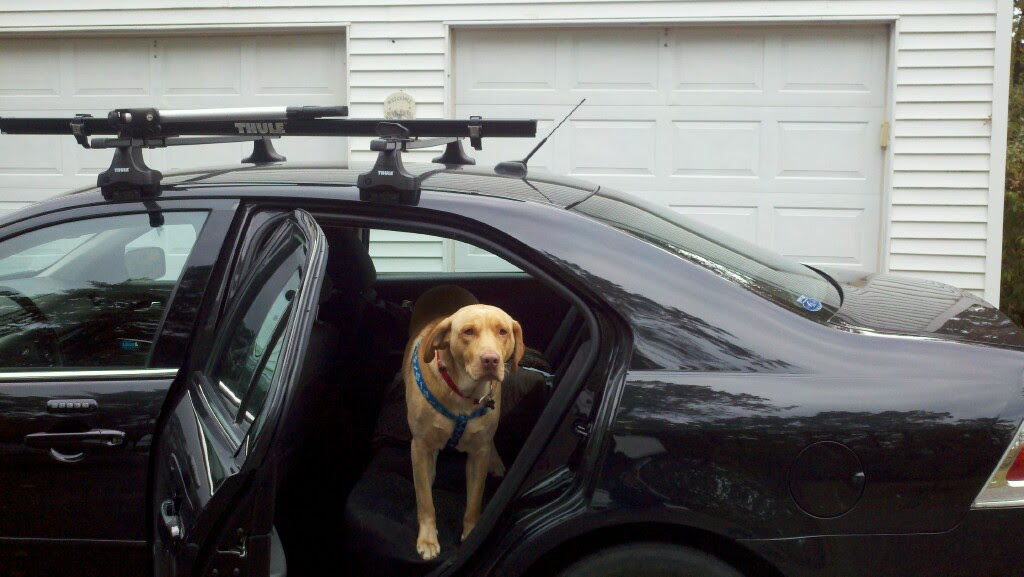 And when told to get out of the car: 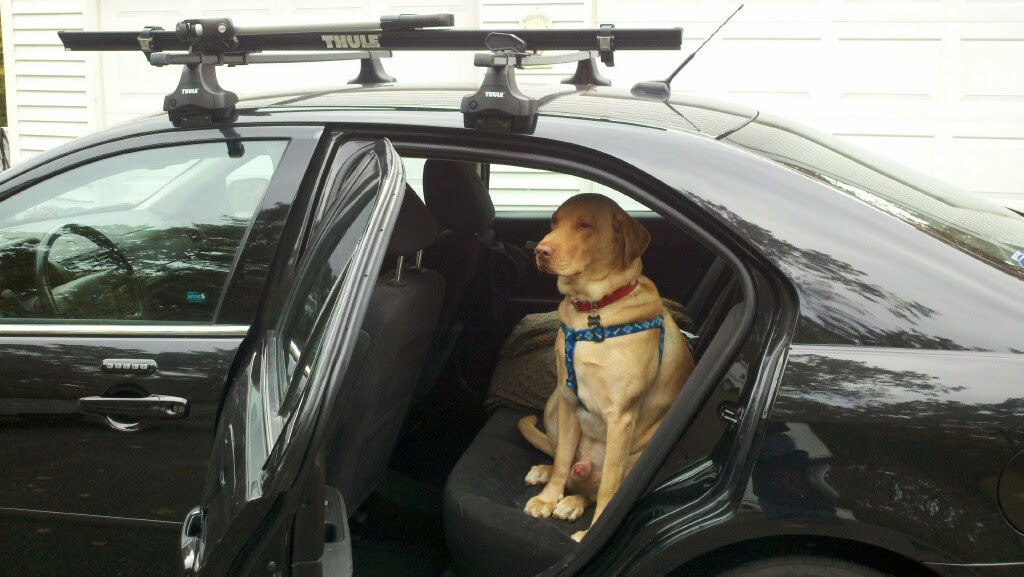 First fire was on October 1st, about a week earlier then last year.

Work is progressing on the foyer.

I'm not the best carpenter, but it didn't come out too bad for me.

I'm not helped by Papu's finest assembly of whatever he could scrounge up in whatever looked sort of right...counting from the front wall, the distance between studs 1 and 2 was the standard 16". Then 17-1/2". Then between 3 and 4 was 11-1/2". *sigh* I used 5" spacing on the coat hooks because it was the only thing that mathematically worked which wouldn't conflict with one of the lag bolts.

Next up will be using the same red oak and Danish oil to trim and make a mantel around the heat shield for the woodstove. I never liked the cultured brick veneer I had done years ago and chipped it off last week. That will have to wait till next spring or summer as I can't do the masonry when the stove is going. Woodwork I can handle. 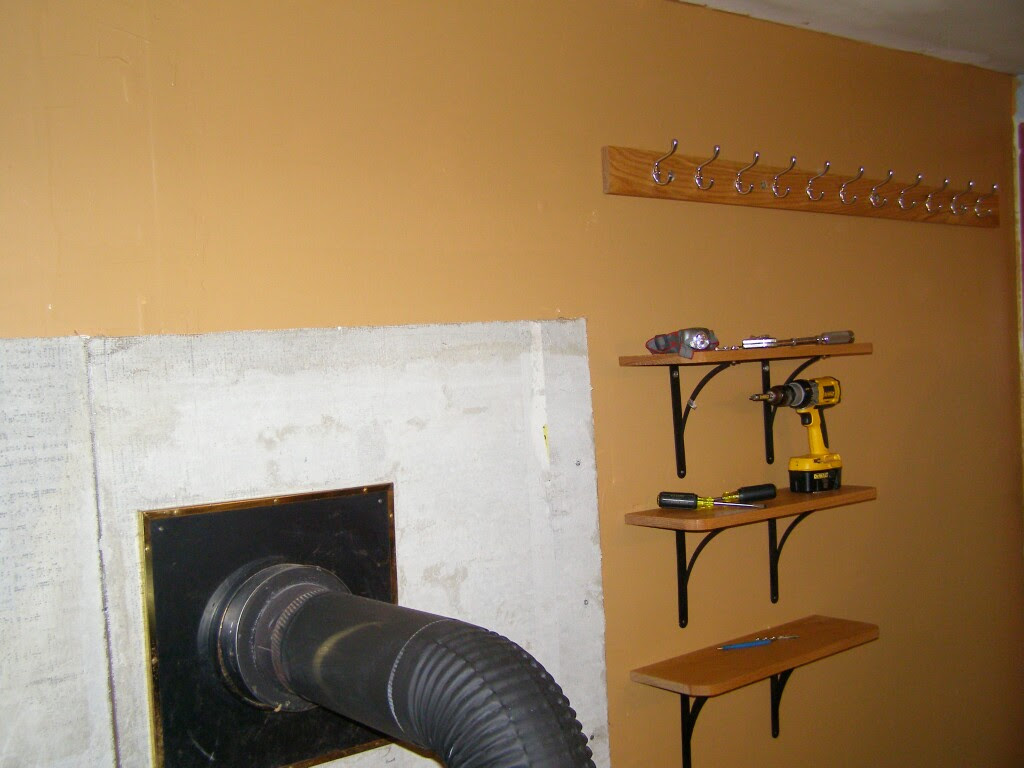 And after a run to (say it with the French accent...) Target for some containers and we have: The paint is Valspar 3002-7B "Gleaming Tan" in eggshell finish and I'll be continuing that color on into the kitchen over the winter.
Posted by Matt at 10:05 PM 2 comments:

Also on my Amazon list to read over this winter is Quiet:  The Power of Introverts.