Was just a gorgeous low humidity, warm but not hot day! 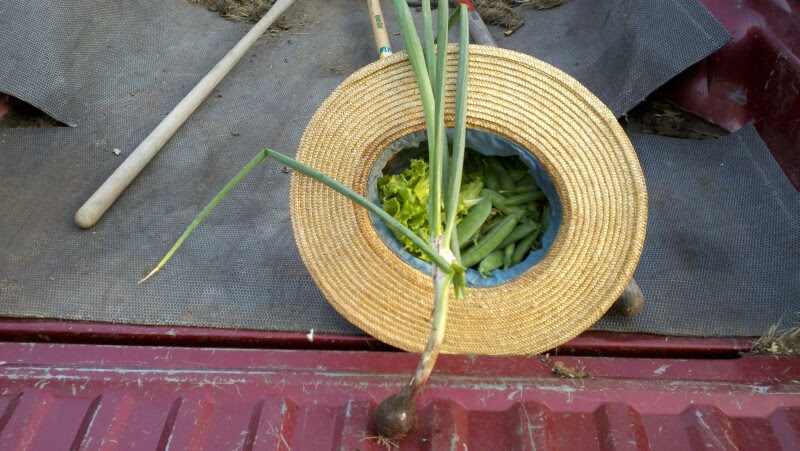 My straw hat doubling as a basket...since I forgot to bring a basket or bag with me. Lettuce, peas, and young red onion (sent up a flower, so I decided it was worthy of early harvest :D ) 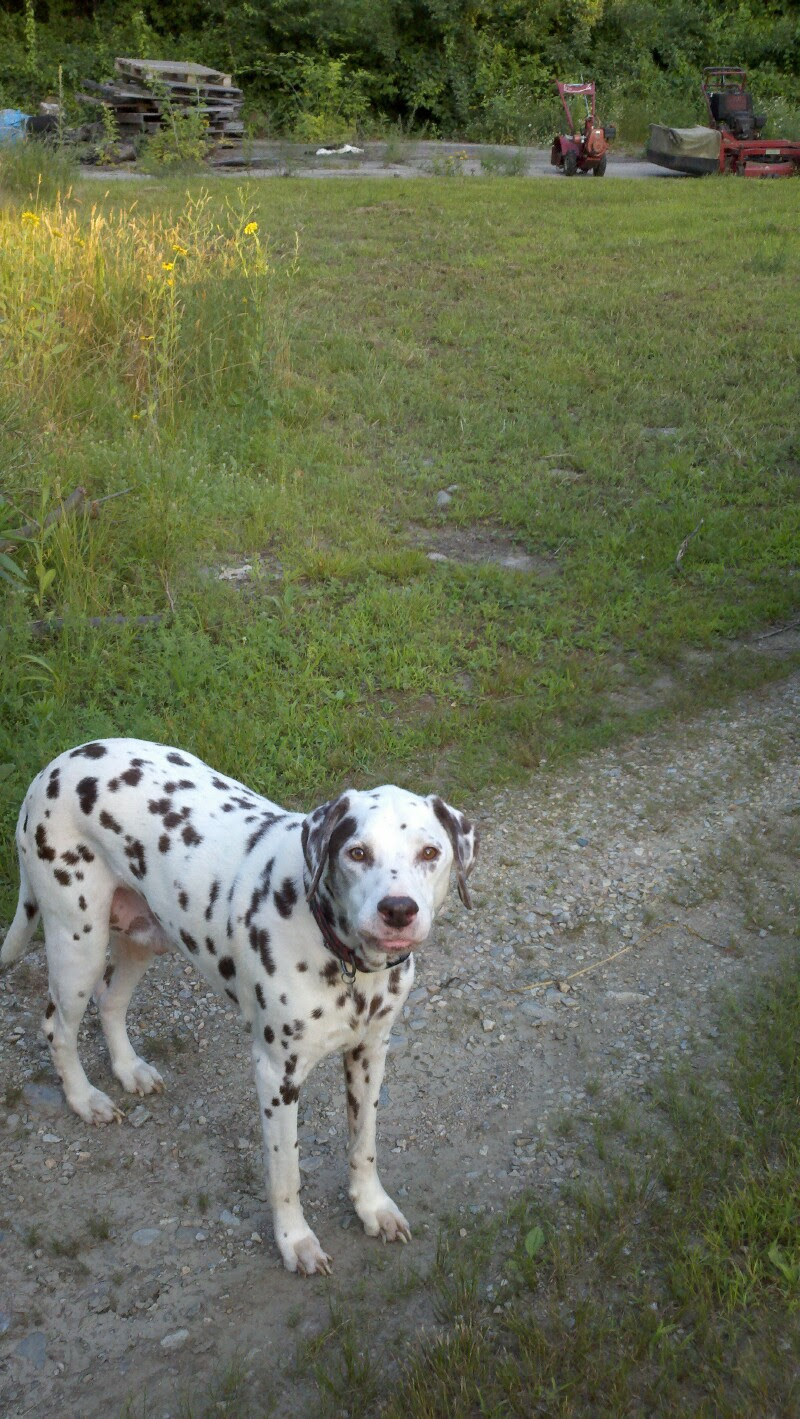 Now follow directly back of Oscar (click the pic for bigger version). See that black and white thing on the concrete pad? That's one of my barn cats. Sunning himself. With me and Oscar having spent a half hour in the garden.

Jake would not have tolerated this. 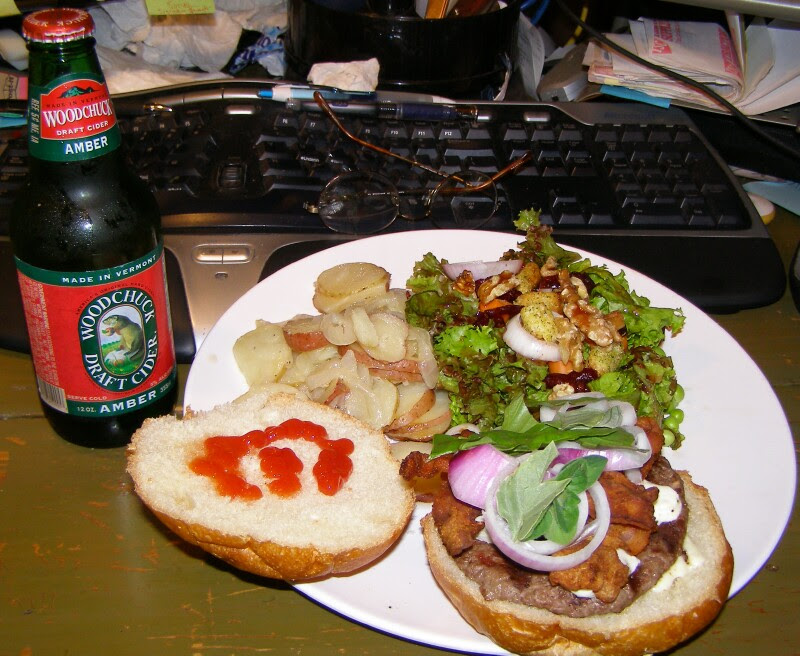 Yellow and red potatoes and Vidalia onions my mom grilled in butter, salt, and pepper on Sunday. She nailed it just right, they were surprising very good!

Burger:
Kaiser Roll
Local hamburg
Oil-packed herb mozzarella cheese
Bacon (fried it up while I shelled the peas and cut up the rest of the ingredients, before putting the burger on the George Foreman)
My Red Onion
My herbs
Couple dashes of horseradish sauce
Little bit of Ketchup

I walk into Sweet Peas, a little specialty food / bakery in town. 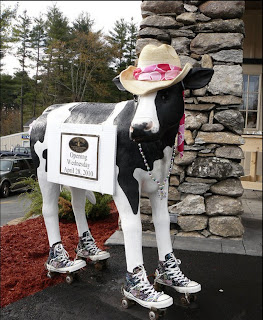 ...it's just their 3-1/2' high fiberglass cow wearing a straw hat. Rolled inside because it was raining today.

My amigdala was three-quarters of the way to deciding Cujo was about to pounce on me. 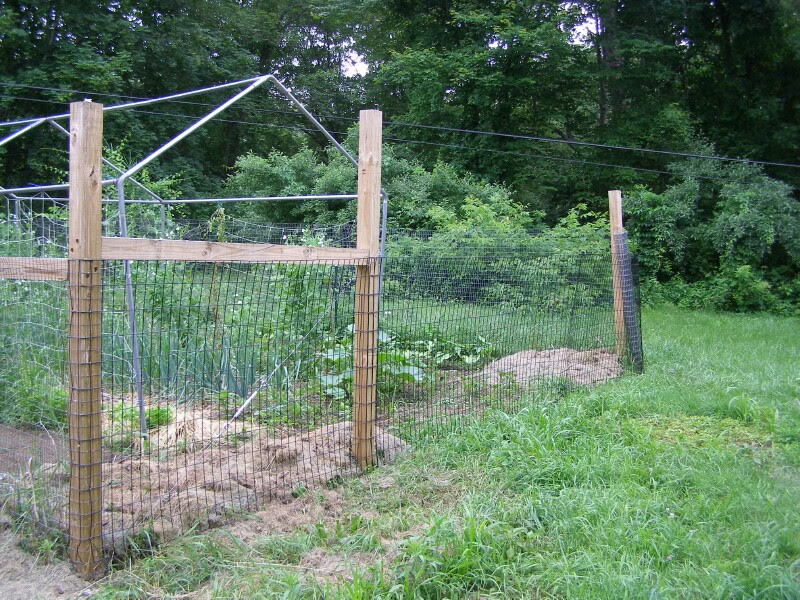 The north end of the fence I stapled up Sunday. Used to be much longer and just laid in place. That's a 2"x4" mesh, which is on the big size -- baby bunnies could squeeze through. But I already owned it (used to be around the front yard to keep the dogs in, but with just Oscar I don't need that area fenced anymore). 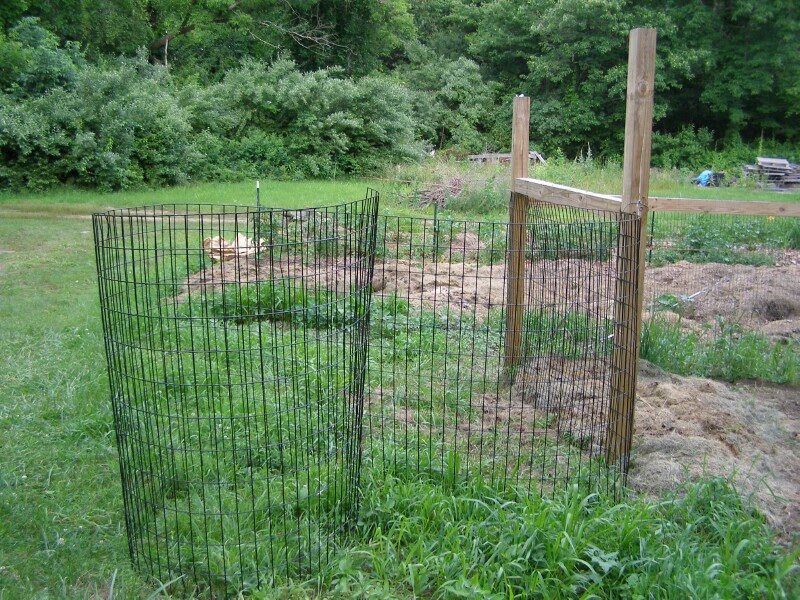 I've decided rather then gates, it's much more flexible if I leave the fence loose so I can make a wide opening to bring equipment in when I need to. 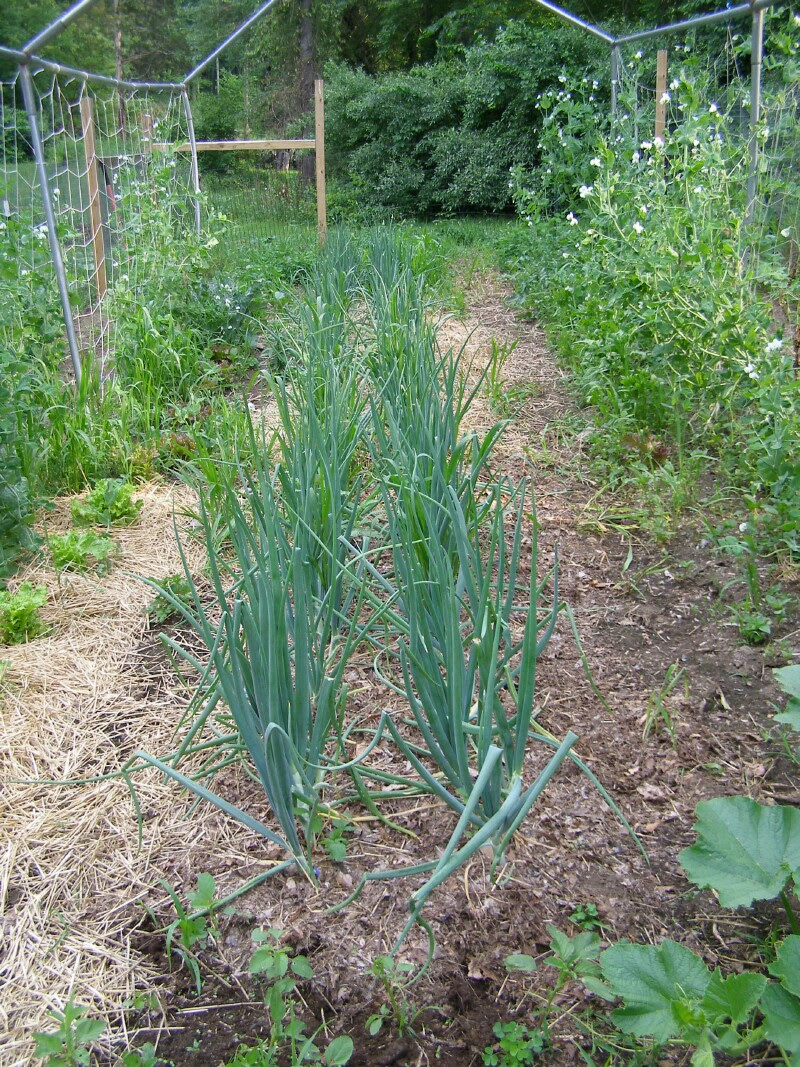 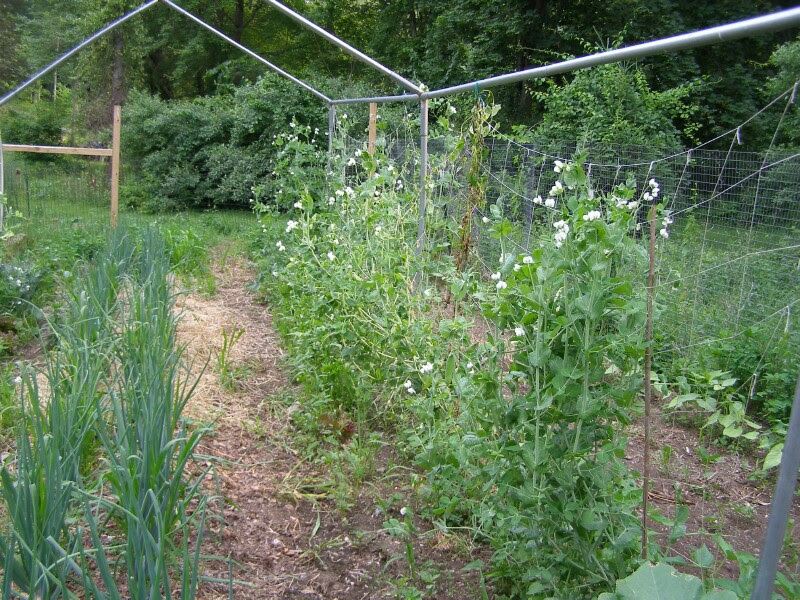 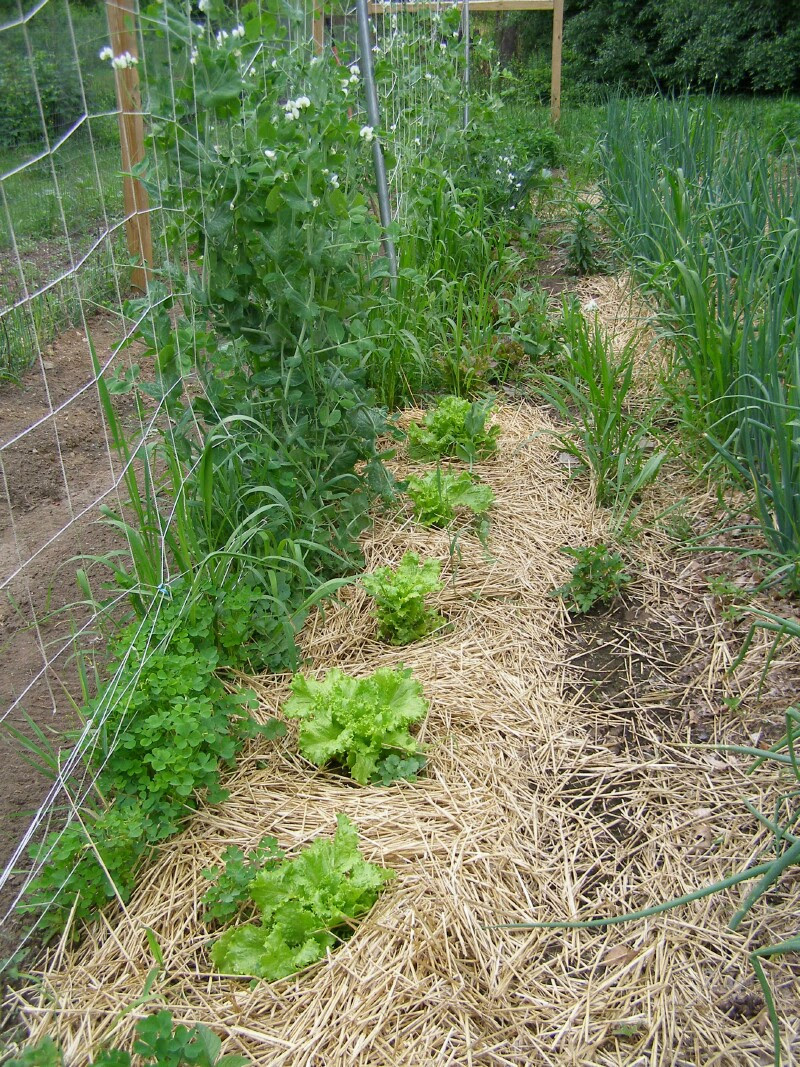 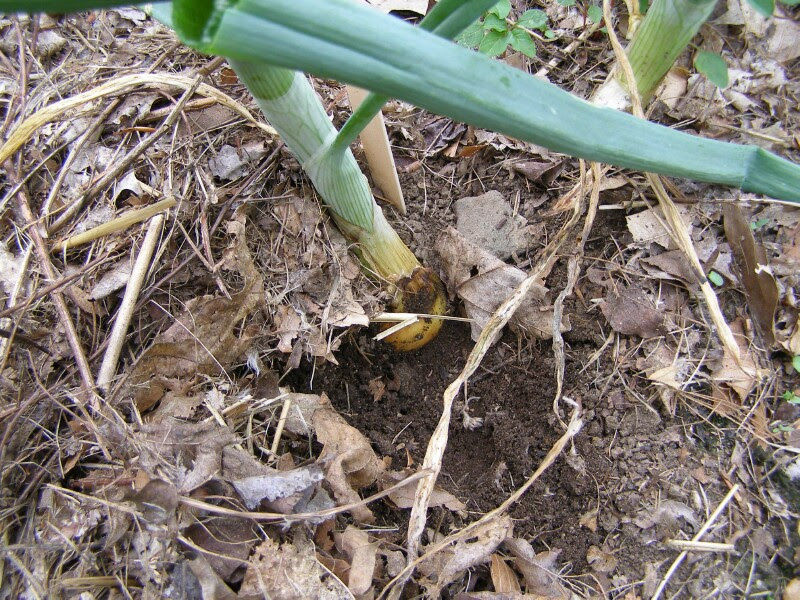 Pulled back some mulch...golf ball size bulbs...come on babies, start putting on some girth! 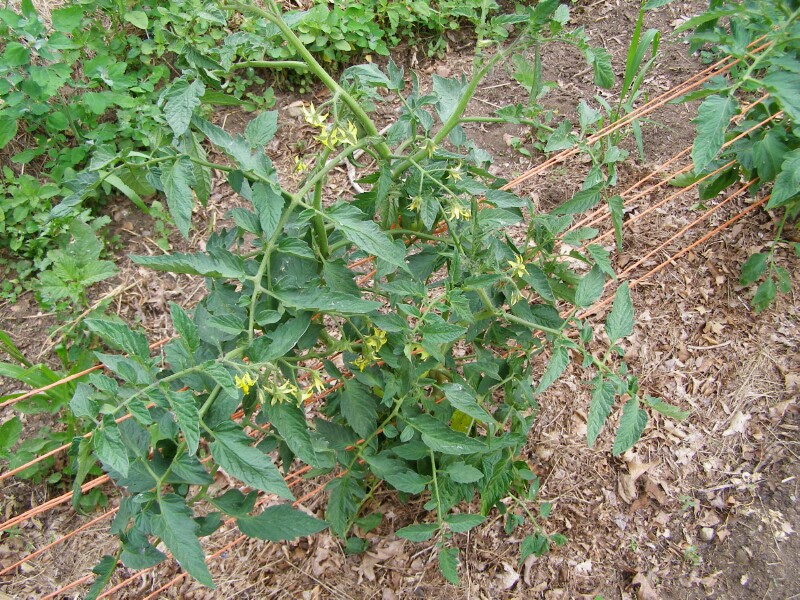 All my Early Girl tomatoes have flowers, but the one from a 4" pot has had fruit set for a week already. 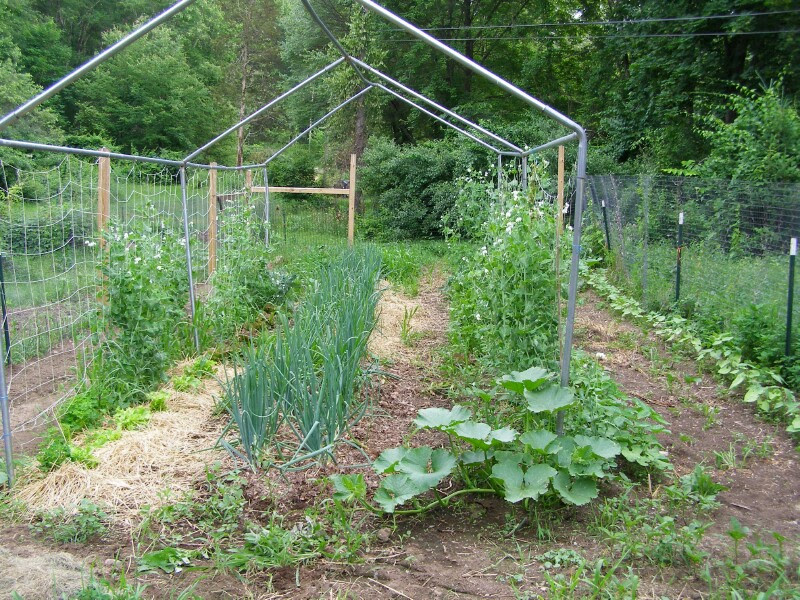 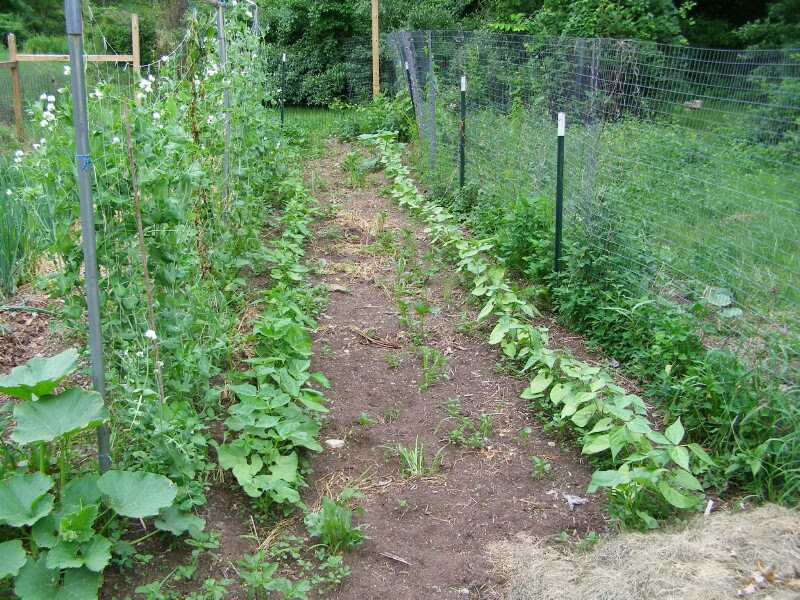 Outside row is green and yellow snap (string) beans.

Inside row by the peas are Jacobs Cattle and Soldier dry beans from Old Sturbridge Village. 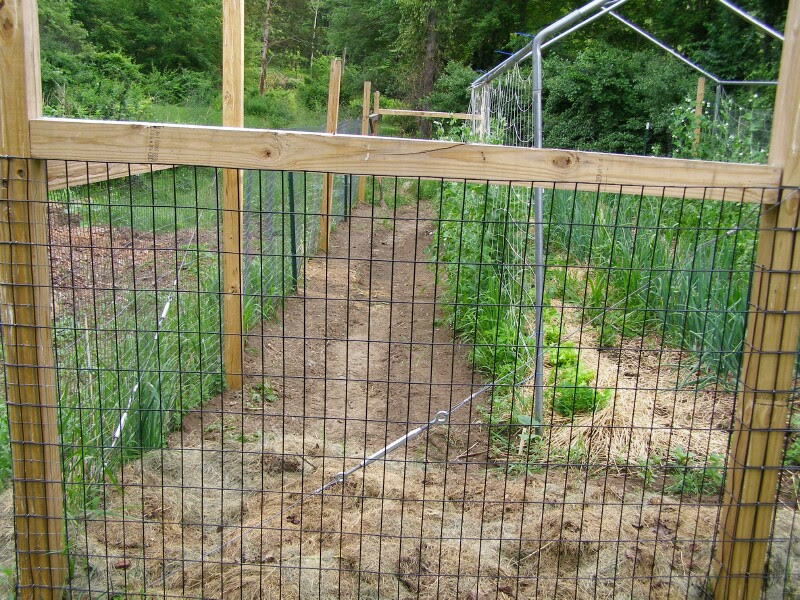 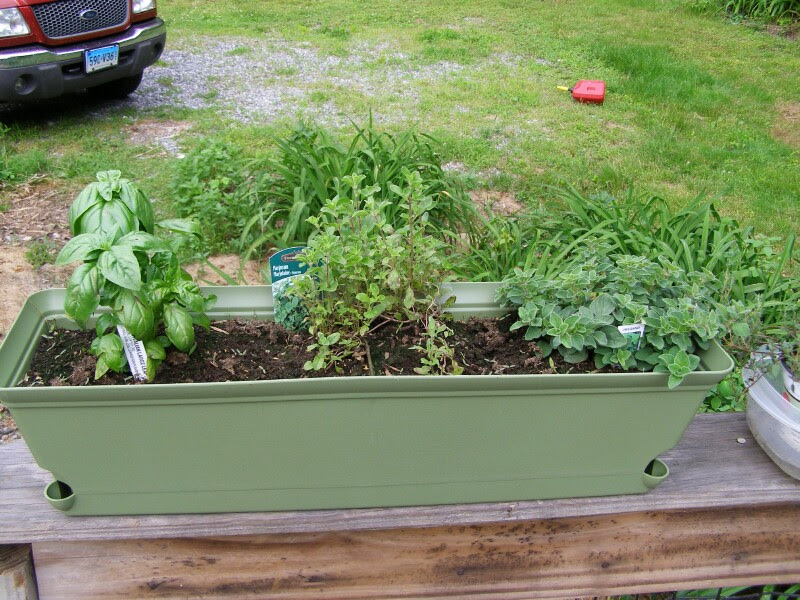 My little herbary -- Basil, Marjoram, Oregano (Thyme in the pot you see peaking on the right) 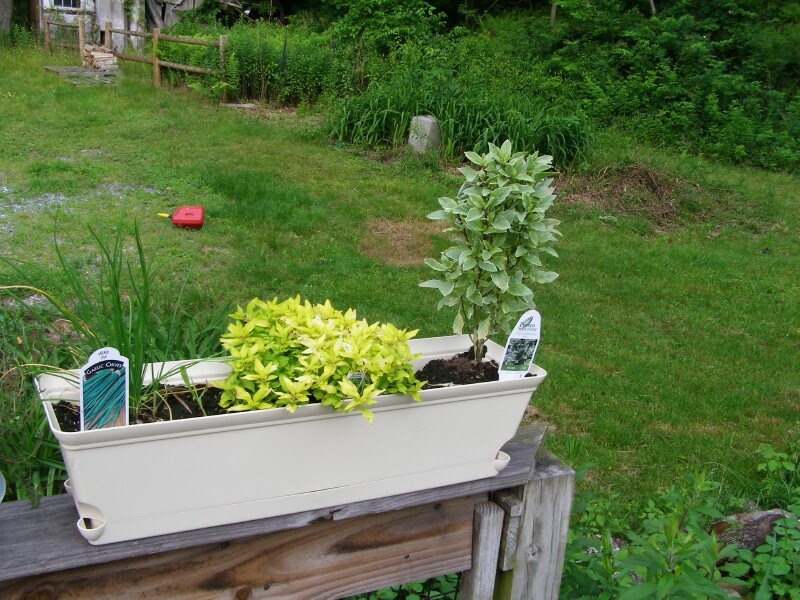 Did pick some for the omelette I had Saturday(?).
Posted by Matt at 9:11 PM No comments:

Let's see if I can remember the updates...

Hauled more mulch on Saturday, two good loads. Need at least two more good loads -- one to finish covering the manure, and one to cover the southwest corner of the garden to help build up organic matter there.

Worked on the north end of the fence Sunday, stapled it up.

Friday I planted more green and yellow beans (once I ran out of green bean seed), tonight planted Kidney Beans, and threw in some sunflowers. Also Saturday I planted four mounds of Blue Hubbard squash as round #3 of those for trap crops. Hubbards and sunflowers both went in what would've been the east corn bed had any corn germinated :(

Friday I also put up more string on the east row of tomatoes.

Failures so far this year:

-- Only two red leaf lettuce planted from seed germinated, and didn't grow well. Must plant earlier.
-- Poor germination/growth of Swiss Chard, Leeks, and Beets. All in the SW corner, I think there's just not enough organic matter there. Seedlings do OK as they did last year and the tomatoes this year, but not seeds.
-- Corn. Complete and total failure x 3 varieties. Need to put some seed in damp paper towels to see if it was poor germination from improperly storing them (although other seeds stored with them germinated fine), or if it was something with the soil/planting (I didn't tamp 'em)/something eating them (though the seeds were treated seeds).
-- Flea beetles on the eggplants. Looks like the plants are just starting to grow past them. Cross fingers.

Saw first flowers on potatoes today...which means there are spuds forming underneath :)

Picked some pea pods. Those, plus lettuce and spinach, plus some herbs from the planters on my deck, all went into a cheeseburger for dinner -- yum yum yum!

Another 1" of rain on Friday AM...guess between recent rains and the compost spread earlier this year, the Rhubarb is looking the best of the year! Should be wilting by this time of year. This is the second year in a row it's been in real good shape this late in June, I wonder if it's the plants are maturing and have established roots now?
Posted by Matt at 10:46 PM No comments:

I need to buy a ricer.

I have very seldom seen hail, and only one decent and even that wasn't too bad hail storm that I remember when I was kid -- up on Tripp Hollow and I remember mom & dad were real worried...I think mom even had me move away from the big bow windows in the dining room.

So this morning we're getting a frog strangler -- had 6/10ths of an inch fall in 20 minutes -- and I heard a weird noise. I'm looking around the house, in the kitchen...finally I notice hail outside bouncing off the deck and everything else solid!

While I usually try to work normal hours, I'm doing some after-hours upgrades so I was working till 8:30 last night, and was back at 6:50 this morning to see if the Indian team saw any problems. They did, I fixed.

Had a small project in the garden I wanted to get done before it got hot and we got any more wind -- staked up my asparagus...the tallest fern is 6' 8" and that's measuring from the top of at least 6" of mulch! 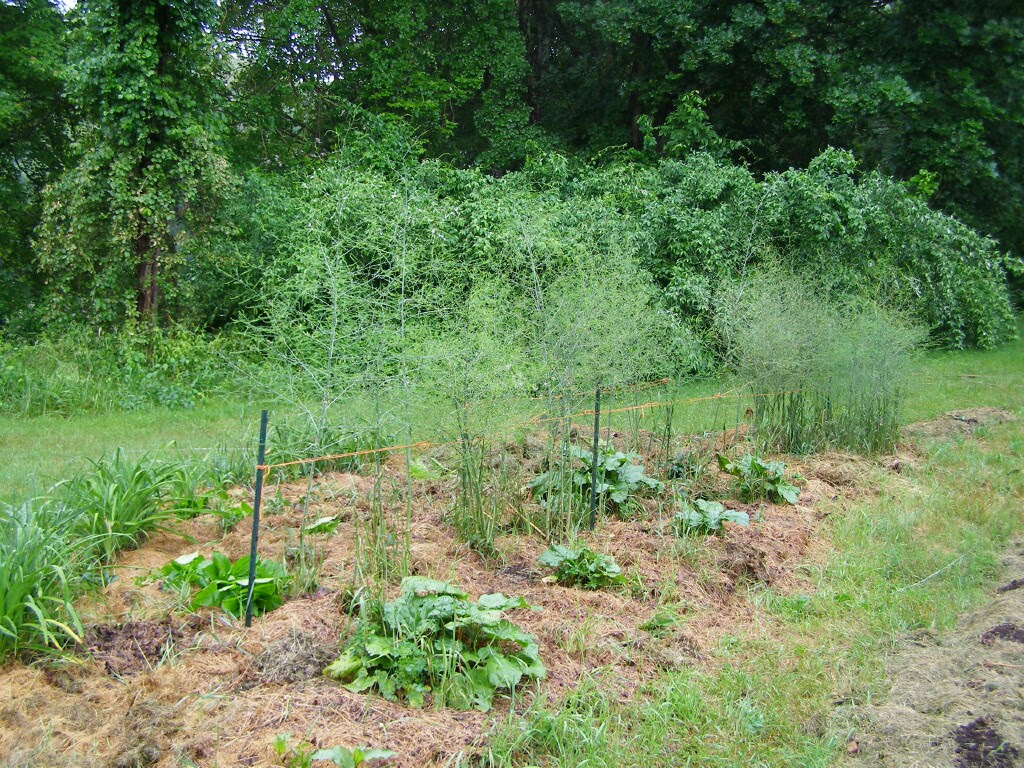 Some, I hope not most, of my onions have been bolting. Those won't store well, but are fine as green onions. Had my first one today -- in a green onion and spinach omelette. Oscar ended up getting about a third of this, which he snarfed up like no tomorrow: 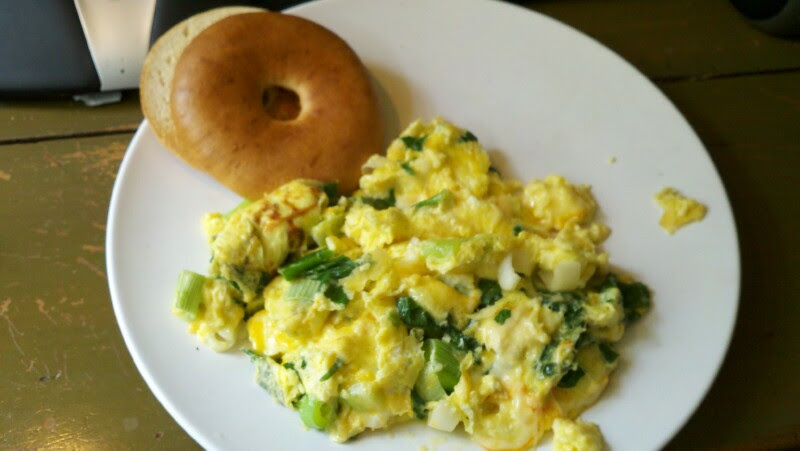 Summer squash is up (9 days after planting)

A number of onions were forming flowers...not a lot, but more then I wished :( I caught one this weekend, probably pinched off nine today...probably doesn't really matter since they won't store well. Hmmmm...I think I'll pull one and make an onion-and-spinach omelette for lunch tomorrow.

No slug bait in the garage, need to pick some up this weekend. Found some small slugs on my lettuce this week.

Rigged up a diverter valve from my sump pump and started diverting flow down to the garden. Not enough umph to drive a sprinkler or likely even a soaker hose, but I can move the open end of the hose every couple hours :) Call it good exercise walking down to the garden and back during the work day. No photos as the lense on the Droid must be dirty; all the pics were blurred.

Beans came up yesterday (7 days)
Blue Hubbard came up today (8 days)
Peas setting flowers
Had one onion trying to make a flower, took it off.
Posted by Matt at 8:00 PM No comments: 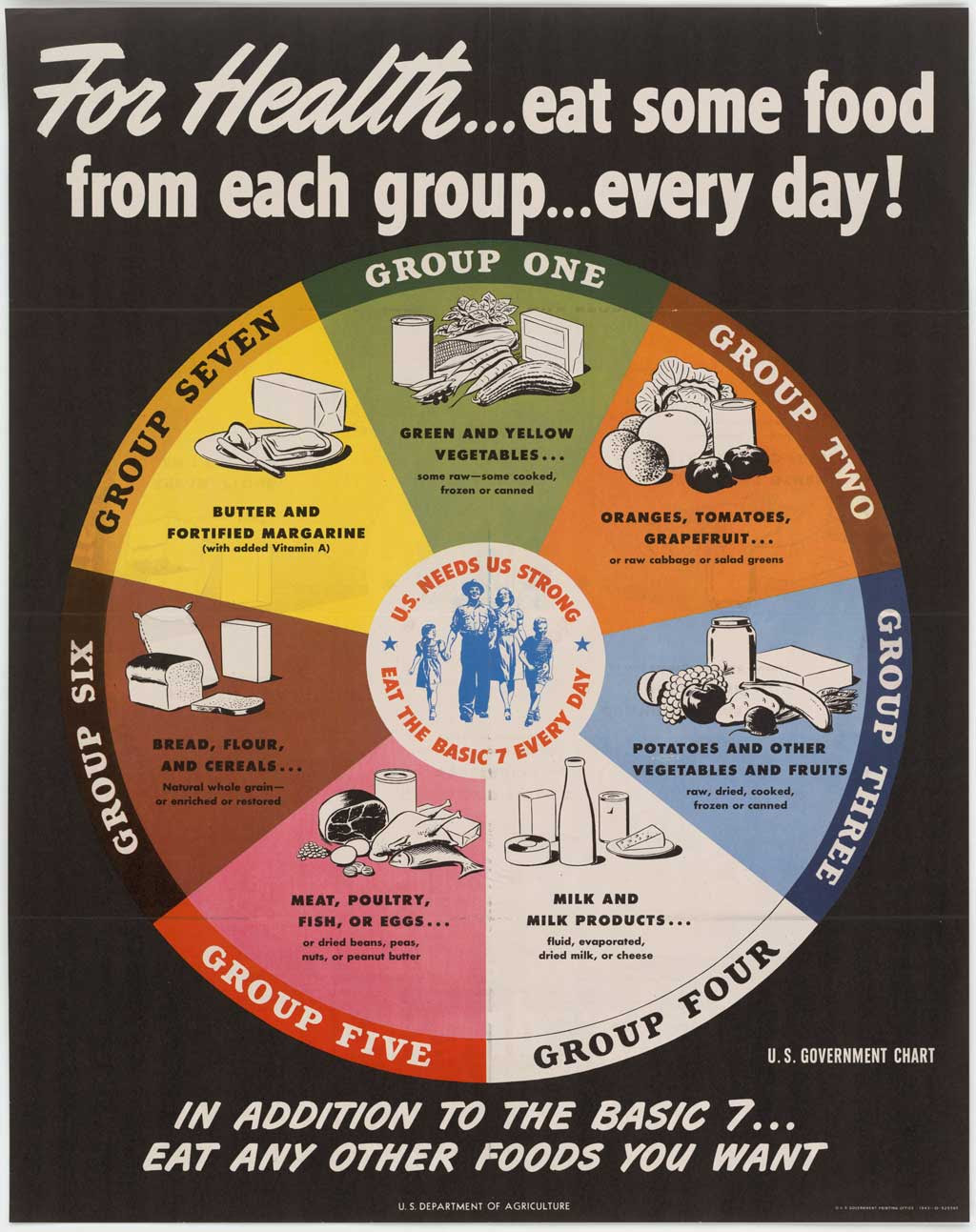 The "Basic 7" was introduced in 1943. One thing we forget today is that, other then "farm boys" (and not even all of them, particularly from poorer southern / share crop farms) and their families, a lot of Americans were undernourished through the 1930s. Not just in diversity of food, but also raw calories.

While today's challenge for the military is to get most recruits thin enough to serve, the CCC and military in the 1930s struggled to get new members up to weight. Which is one reason why fats and other high-calorie foods were emphasized.

From '56 to '92 we had the "Basic Four / Three square meals a day" plan, then the food pyramid, and just released "My Plate" -- we went from the the mess that was the pyramid's recommendations created by committee...to My Plate which is graphic design by committee.

My favorite video of it:

All right Mr. De Mille, I'm ready for my close-up

Have severe t-storms threatening (and may still get one tonight...three towns north of me in Mass they got hammered by a tornado) so I stopped at the garden when I got home from work to tie up some tomatoes that were getting tall enough to worry about wind, and I was so proud how my "spring" stuff looked I needed to take some more pics: 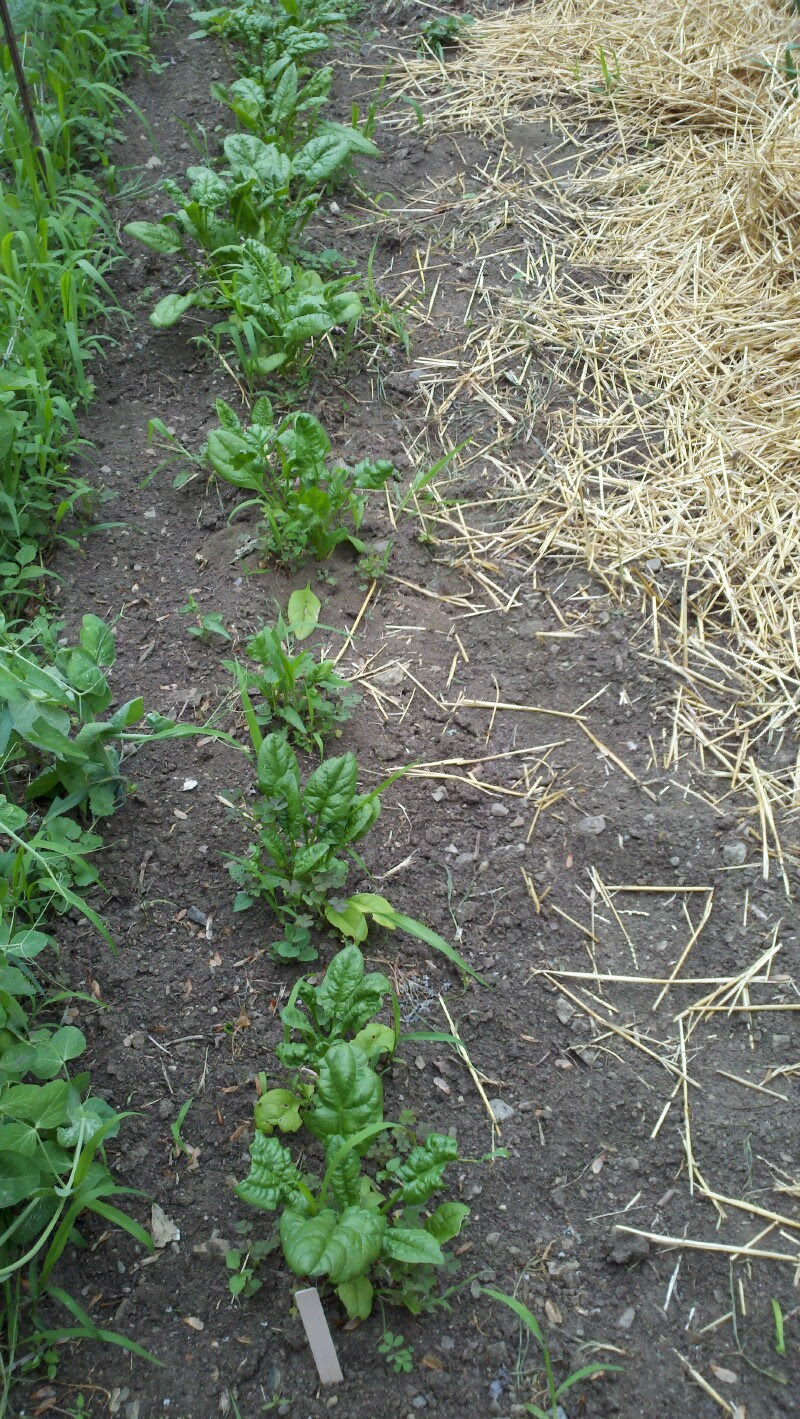 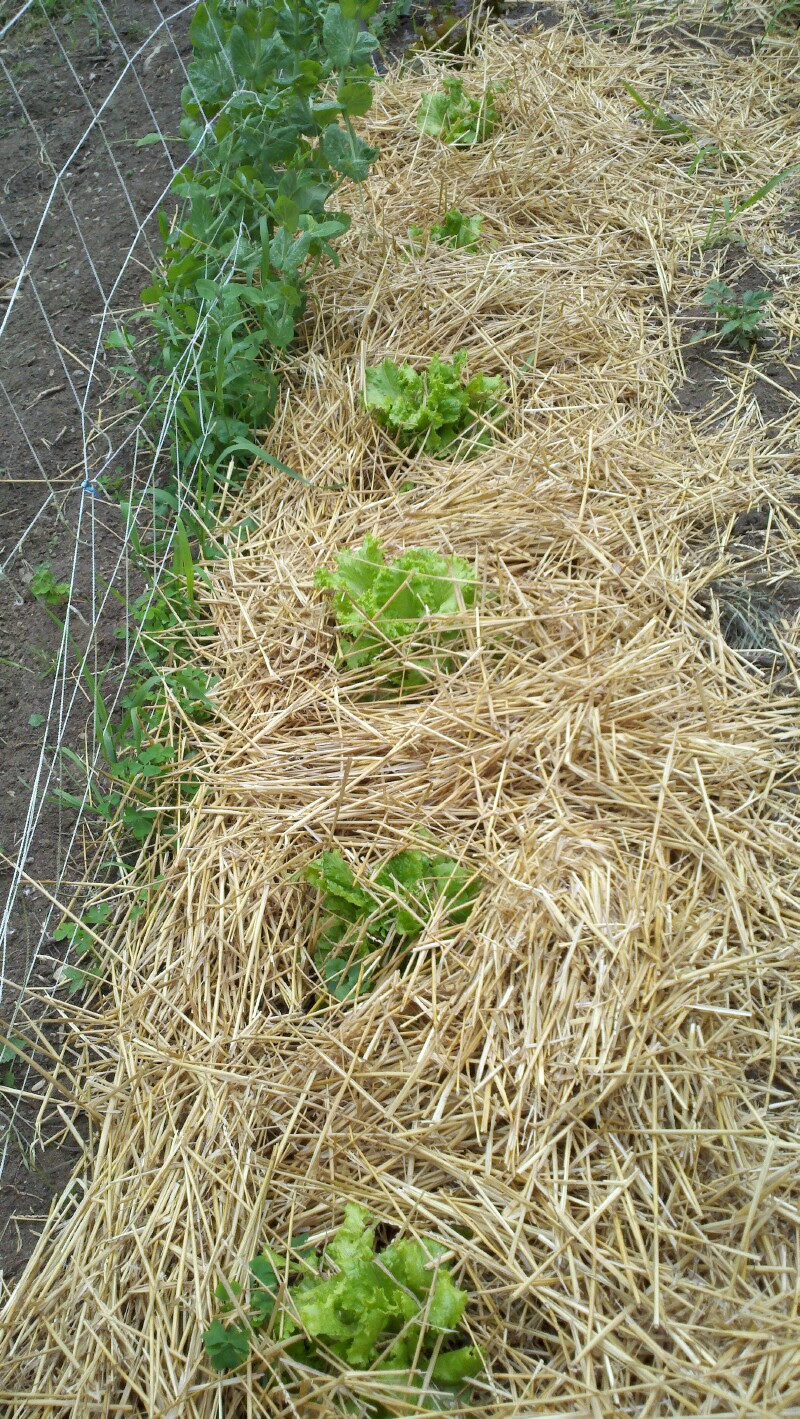 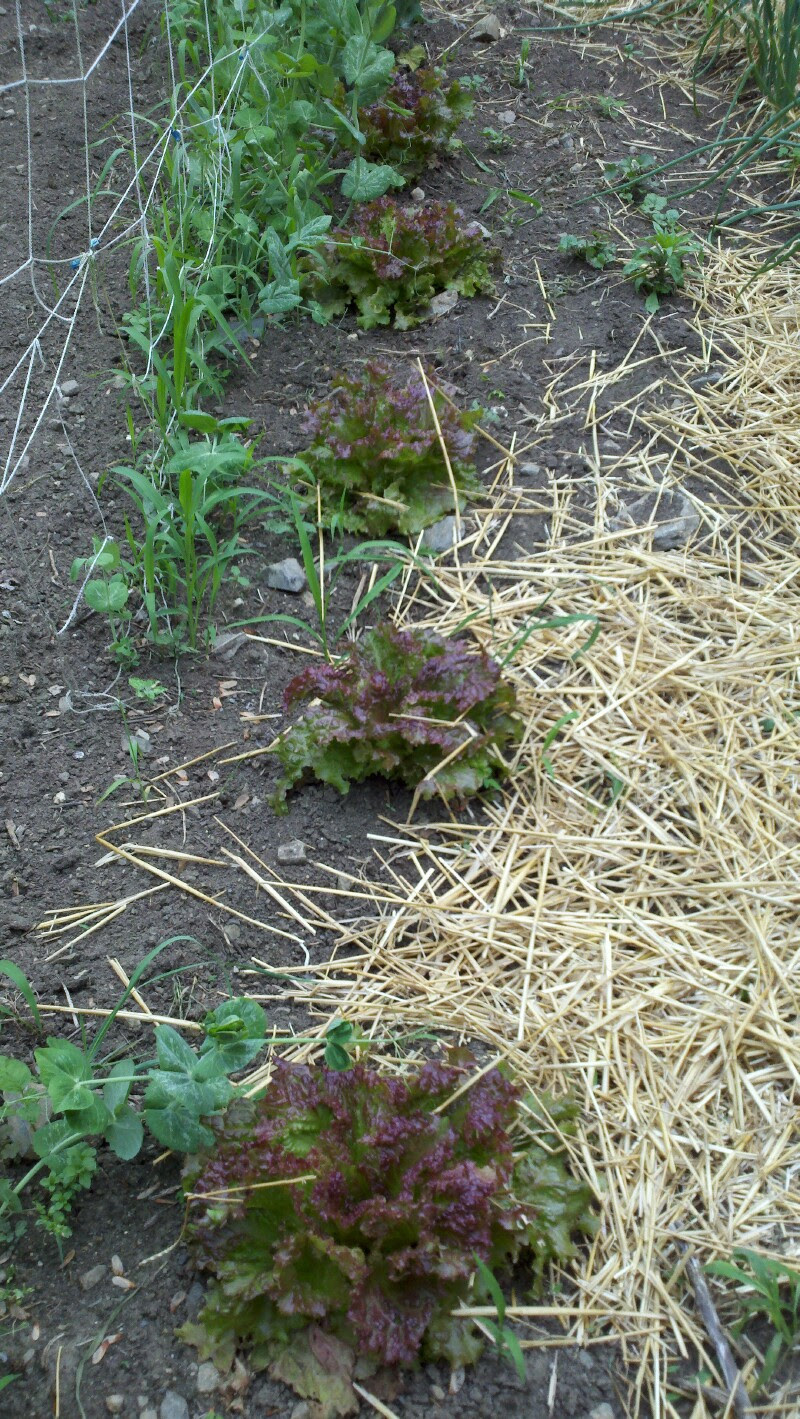 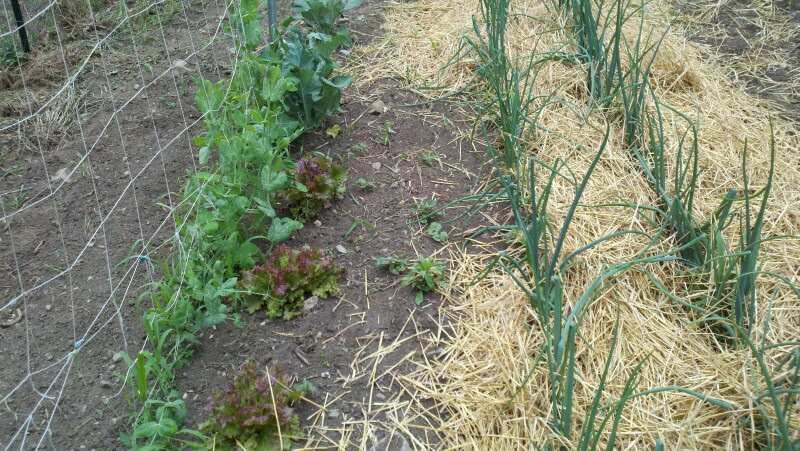 All I can say is wow...just wow...at my onions. They're all forming big thick necks. I am chomping at the bit to see how they turn out.

BTW -- I've determined that I *love* by scuffle hoe. Perhaps the best single purchase I've ever made for the garden!
Posted by Matt at 9:11 PM No comments: