Greeen and yellow beans, cucumbers (showing signs of stress from heat and dryness!), squash, chard. I think I was supposed to start picking the chard a bit sooner.
Posted by Matt at 12:13 PM No comments:

Plus some lettuce (last until fall, it's finally turned bitter), baby yellow squash and zuke, couple red onions that were flowering that I didn't pick yesterday, couple of shallots.
Posted by Matt at 12:21 PM No comments:

Fixins for Saturday's dinner after I got home from Old Sturbridge Village (Photo essay here.)

So, I had been thinking a bird or something was "sitting" on some of my onions because they were randomly bent over.

Du'oh. That's HOW they're SUPPOSED to act when they're done. Never had them come out this well to recognize good!

99 Days since I put them in the ground, rule of thumb I read this year is 100 days, so we were right there. I think it'll be interesting experiment next year to make some successive plantings from late March to late April and see how they do.

Later in the afternoon.

I had to give the bush beans a little support with poles and twine...I tried to keep it "loose" as I did it, just enough to prop them up off the ground.

In between the U posts, I hammered in some red oak stakes I made, from branches of trees I cut down for firewood. These just pushed back on the baling twine to push the whole row back, nothing fancy.

57 Onions curing in the garage. They'll stay here for a few days, a week for the tops to dry and the skins to harden up. I'll have to sort through them then to see which ones seem like they'll store well, and which ones I should chop up and freeze (or give away for use fresh).

Tonight's dinner -- Hot Italian Sausage from Campbell's Farm in Griswold fried up with my onions, baby zuke, and baby yellow squash.
Posted by Matt at 8:46 PM No comments:

Nice thing about the home office...picking your lunch, fresh. 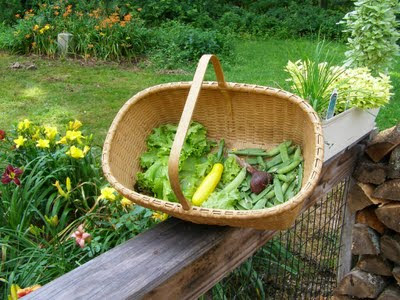 Mad Men, why hast thou foresaken me?

It's summertime. There's no new Mad Men this summer.

How bad is TV now that I can only figure out three shows that I can put a number to?
Chuck...meh when it's ordinary, phenomenal when they recapture that Season 2 magic. Budget cuts alone don't excuse the inconsistency of the writing. But what a cast. But it takes writing to get a number!

Glee...a TV show that needs Ritalin. I just can't bring myself to give it a number. Focus folks, focus...I know it's bubblegum, but focus.

Can't even think of any other fictional shows I watched this past year!
Posted by Matt at 9:31 PM No comments:

My first cauliflower ever. I squeed when I saw it.

In the basket! (To be steamed for dinner tonight)

July 4th weekend I cleaned up some by the entrance to the driveway, and moved a selection of native and hybrid daylillies down there. Over the next couple years I hope to expand this bed more, too.

Was originally forecast for 1"+ of rain on Sunday night when I planted them; we got a trace. It's been over a week since good rain and I've started irrigating the garden using a hose that diverts some of the flow from my sump pump -- just leave the open hose in place for a few hours to flood a section at a time (not enough pressure for sprinklers or soaker hose, but I'm already using the electricity so just let it have at it.)

Not enough hoses to reach these flowers though, so I'm hauling it by five gallon bucket...I like the looks of the American flag buckets.

My herbs...I'm really liking them in containers like this. I had thought about a raised bed, but now I'm thinking next year I'll get a table and just continuing to use containers for a bigger assortment. Plus with them up this high, Oscar can't pee on them :D

Potatoes, tomatoes, daylillies, squash all blend together...there must be a trick to good garden photos I haven't learned yet for situations like this!

Volunteer tomatoe in the big pile of manure...where the heck did that come from!

Summer Squash...maybe a smidge not enough sun way back here. There's more in the weeds towards the back, hopefully I can mow this weekend for mulch for them!

Chard! Hrrmmph...just remembered I wanted to taste it and then I started weeding, and watering, and photographing...and forgot to taste it!

Red lettuce is starting to wind down, but the green one is going gangbusters still!

Onions...I think a bird landed and flattened several onions in several spots. Only explanation I have, they've been squished, it's not a natural lay down.

The big squash is a Blue Hubbard, specifically planted as a trap crop. It's July 6th and I haven't seen a Squash Bug yet. Past history is I've found egg masses on 7/1 and seen adults by 7/8...so I'm watching patiently :)
Posted by Matt at 6:19 PM No comments:

Two nifty films I've found in the past week.

Sometimes folks use the words "conventional" or perhaps "modern" to describe how most farmers (and gardeners) do things today. "Industrial" sometimes is used, and "organic" especially since it was codified by USDA for use as a marketing term doesn't necessarily mean what many thought it did -- and thus is born the type of farming called "Industrial Organic." Might be an interesting Venn diagram to draw one day!

More then anything else, I guess you'd describe modern (the style that became dominant after World War II) as "high standardized external inputs" -- add self-propelled machines, fuel, fertilizer, pesticides at specified levels to achieve X result (from which commercial farmers also need to pay a decent finance charge to the bank for the money you borrowed to get going for the year.) Many "Industrial Organic" folks do just that, they just substitute different things for fertilizer and pesticides compared to the Industrial Non-Organic world.

WWII had many impacts -- one is mentioned in the first video, alternative pesticides were recommended. Although one specifically mentioned in the video is a mineral-derived pesticide, other synthetic pesticides were increasingly popular. The war had disrupted supplies of what's today considered organic insecticides like rotenone* and pyrethrum, just like it had disrupted supplies of natural rubber and silk. Synthetic pesticides could be manufactured from petroleum, something that didn't have to be shipped through war zones. Similarly, the Muscle Shoals Munitions Plant was built in World War I to supply nitrates for the war effort. Afterwards it was auctioned off to produce fertilizer with the caveat the Government could take control and re-convert it to producing nitrates for explosives in the event of a war; this kept the plant active and maintained instead of being mothballed to rust away. Come WWII it was greatly expanded, and after the war once again a market was needed to keep the plant producing nitrates so at a moments notice it could support a war effort again**.

With the switch to modern input-driven farms and gardens, a lot of the more intensive "brain power" of observing and adapting to local conditions withered. It didn't die, but greatly reduced to pockets here and there. Folks turned to simple answers in charts in pamphlets published by the Universities and commercial enterprises; the complex calculus of nature was reduced to simple, discrete arithmetic that took a lot less time and thinking to figure out.

But there's also something I'm sure about -- the best of our modern thinkers about the "old way" of integrated systems and lower inputs have pushed the state of the art beyond "the good old days." The knowledge may not be as widespread, but at least in a few folks like Coleman and Joel Salatin and the like it's a deeper knowledge and greater wisdom then the best of the best had several generations ago.

And Elliot Coleman today -- the first 14 minutes of the audio is really poor quality, so you may want to fast forward through that. That still leaves an hour of wonderful stuff:

* I'm asterisking rotenone since it's largely being withdrawn from the market as I type; EPA asked for more information from the companies that sold it in order to keep listing it as an insecticide due to concerns about water pollution and Parkinson's Disease. The companies decided not to spend the money on the research and instead asked for several years to wind down their operations. The date the last supplies may be shipped from their warehouses is July 14, 2011.

It will remain listed as a piscicide since it's the only poison fish & game departments consider 100% effective at killing fish -- and it's used to combat invasive species by killing all fish in a body of water followed by re-stocking with only native species.

** We forget how many things tie back to national security. We had a need (perceived at least) to keep up a nitrate manufacturing capacity in case of a future war, so we encouraged farmers to use synthetic nitrogen fertilizers to provide a market to fund the plant. We had a need, again at least a perceived need, to build a lot of atomic bombs in a hurry so civilian nuclear energy was guided to using reactor designs that produced feedstock for nuclear weapons programs.

(Oakridge consumed more power in World War II making the fissile material for four bombs then all of Canada! After Trinity and the two bombs dropped on Japan, a fourth was in reserve and it would take Oakridge another six months to produce enough material for a fifth bomb. This was not something the Government could scale up in a race with the Soviets)

We have a nuclear waste "problem" today because it was never intended to be waste -- the spent fuel rods were supposed to have been re-processed into either bomb material or new fuel rods. Jimmy Carter halted reprocessing plans as part of a nuclear non-proliferation strategy, which left the Government holding the bag for what do with the "waste" that they had wanted produced in the first place and now wouldn't allow to be recycled. Private enterprise would've likely chosen lower cost designs that didn't produce as much waste if they had been told from the start they'd be on the hook for it.

The idea for an Interstate Highway System already existed before World War II; but experiences with motorized warfare, Germany's Autobahn, and relative vulnerability of bombing rail lines reinforced the importance of one. With the advant of single weapons that could destroy a central city in a flash, decreasing density of both residences and offices made good strategic sense -- defense by diffusion; and with plenty of land in the U.S. and plenty of synthetic fertilizer to boost yields on what remained in production, we didn't have the constraints of small nations in Europe each trying to maintain enough farmland to be self-sufficient...so suburban expansion made sense to us where it didn't necessarily make the same sense to Europe.

Oh, and they created this highly decentralized, self-healing computer network designed to survive attacks called the "internet."
Posted by Matt at 5:01 PM No comments: