Damn you Disney (and whoever puts out Super Troopers) for planning to suck my wallet dry with movies over the next few months. Before the Marvel movies started coming out, I could go five years without seeing five movies in the theater.
Posted by Matt at 5:47 PM No comments:

At the same time the folks in this bracket pay a very low percentage of their income in taxes. They can't consume all their income (so very little of it is spent on items subject to sales taxes); their homes and cars in state are only going to be worth so much (so little relatively paid in property taxes), and their income is largely capital gains instead of the higher-taxed earned income.

Meanwhile the folks at the bottom spend all their income, and if they have big assets those will be cars and homes subject to property taxes. So a much larger share of their income goes to the government.

Fair or not, at least those lower income brackets are a *consistent* source of revenue, as the higher you go the more volatile it becomes due to capital gains (and losses) predominating. As lower and middle income brackets decrease and the highest incomes increase, state revenues based on income taxes become more volatile.

Of course Malloy & Company are whining and whinging because what seems to be a "rat" was slipped in by the Democratic (!) co-chair of the General Assembly's budget committee which requires starting this year that the state smooth the receipts from these high income earners over a number of years so we don't get wild swings in the revenue allowed to be counted in any given budget year. So this Fiscal Year we're looking at a $200+M deficit just because we're not allowed to count higher-than-expected, higher-than-average revenue receipts. (A "rat" is a part of bill slipped into it during the wee hours of the morning immediately before passage, that "no one" knows how it got in the final bill voted for minutes later.)

I love this photo. I also know enough about dogs and photography to deconstruct it -- and that the Dalmatians belong to four different owners, all of whom are strategically placed to keep the Dals behaved. Who kept the girl behaved, I have no idea :D

Assessors Photo 1999 -- the electrical service had been moved to the house already. 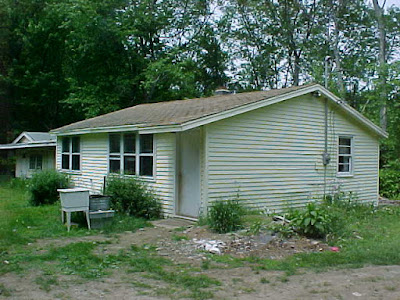 Summer of '16 before I started taking down the old screen porch section. It gets to a point doing cosmetic maintenance and even minor structural maintenance wasn't worth it knowing that at some point I was going to do a major rebuild and that work would just be torn out then.

Of Nor'easters and Paint

Friday was a pretty good nor'easter, with 2+". Started late Thursday and lasted into the early hours of Saturday, with gusts still after daylight. If it was colder it would have been a gobsmacker of a blizzard.

Water is running and up about as high as it gets.

I agree with the Great Whites...surfers off Weekapaug look like seals.

Liz M. came over on Sunday and we finished up the kitchen painting: