[A] history professor at Virginia Tech named A. Roger Ekirch, who spent hours investigating the history of the night and began to notice strange references to sleep. A character in the “Canterbury Tales,” for instance, decides to go back to bed after her “firste sleep.” A doctor in England wrote that the time between the “first sleep” and the “second sleep” was the best time for study and reflection. And one 16th-century French physician concluded that laborers were able to conceive more children because they waited until after their “first sleep” to make love. Professor Ekirch soon learned that he wasn’t the only one who was on to the historical existence of alternate sleep cycles. In a fluke of history, Thomas A. Wehr, a psychiatrist then working at the National Institute of Mental Health in Bethesda, Md., was conducting an experiment in which subjects were deprived of artificial light. Without the illumination and distraction from light bulbs, televisions or computers, the subjects slept through the night, at least at first. But, after a while, Dr. Wehr noticed that subjects began to wake up a little after midnight, lie awake for a couple of hours, and then drift back to sleep again, in the same pattern of segmented sleep that Professor Ekirch saw referenced in historical records and early works of literature.

NYT: Rethinking Sleep
I can believe that. I needed to catch up on sleep after a long week last Friday -- laid down for a nap at 5pm, got up from midnight to 1am, and then back to bed to 9am :D
But that short amount of time I was up felt really good, then I was naturally tired again.

Sometimes I get on a cycle of late afternoon naps, up for five-seven hours, then get a few hours of short sleep overnight. I don't find that schedule restful and will eventually force myself to stay up late enough to compress my sleep back into an eight hour block. But I wonder if say a 9pm bedtime, then up for an hour or two around midnight, then back to bed for another five to six hours would work out.

I'm not sure it's just the schedules of an industrialized world either -- farmers, without illumination of even candles and lanterns, undoubtedly wouldn't have slept through an entire 12 or 14 hour long winter night, day after day, especially in the season when physical work was at it's wane.
Posted by Matt at 2:44 PM No comments:

Cool concept -- quite an old one, but Dunning & Kruger started to flesh out some empirical evidence on it in 1999.

The Dunning–Kruger effect is a cognitive bias in which unskilled individuals suffer from illusory superiority, mistakenly rating their ability much higher than average. This bias is attributed to a metacognitive inability of the unskilled to recognize their mistakes.
Actual competence may weaken self-confidence, as competent individuals may falsely assume that others have an equivalent understanding. As Kruger and Dunning conclude, "the miscalibration of the incompetent stems from an error about the self, whereas the miscalibration of the highly competent stems from an error about others"

Take this, you Vegan enablers of industrial destruction! 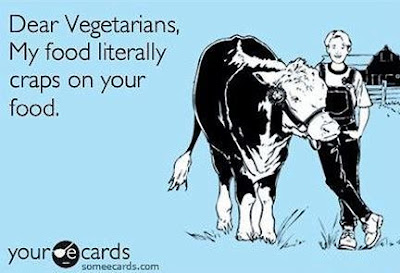 Or, as Sir Albert Howard put it a bit more elegantly in one of the founding documents of the organic farming movement:


Mother earth never attempts to farm without live stock; she always raises mixed crops; great pains are taken to preserve the soil and to prevent erosion; the mixed vegetable and animal wastes are converted into humus; there is no waste; the processes of growth and the processes of decay balance one another; ample provision is made to maintain large reserves of fertility; the greatest care is taken to store the rainfall; both plants and animals are left to protect themselves against disease.

Most arguments I've heard from folks about vegetarianism or veganism I just don't buy.
Healthwise, it's not necessary. Though I do agree with Thomas Jefferson's view to treat the meat almost as a garnish and not the main component of a meal. But you can eat meat and be quite healthy.
Environmentally, encouraging systems without animals is - as Howard says -- destructive and you're going to encourage many bad practices of industrial farming. Small, diversified farms need animals and they need markets for those animals to work economically outside of the transaction-oriented, industrialized system of agriculture today.
Much of the planet is not suited for growing annual crops, which is where most of our grains and vegetables come from, and which need annual tillage (whether powered by internal combustion engines or beast of burden). Most of our surface area is best left to grasses and fobs, harvested and converted into human food by the grazing of cows, sheep, goats, etc. Now the grazing needs to be managed, but none the less it's the best long-term, sustainable way to produce human food off most of the earth.
And some people are just uneasy about eating meat, but I suspect that's more a combination of the Beatrix Potter Syndrome (or Disney Syndrome or whatever -- anthropomorphism via media) and not growing up with and around livestock. Farm kids are taught to not name their future food (at the parent's peril if they don't teach that lesson), but through media many people have "named" all their food.
Nor can one argue that eating meat necessarily supports poor practices like confinement animal factories -- it may, but it doesn't necessarily. And someone who refuses to eat meat even when it raised right on small farms and with much freedom of movement and safety is refusing to support the farmers who do the right thing.

Looking for outcrops of ancient lakebeds we drove through villages full of chickens, yaks, and pigs. All around the towns, low silt walls trapped soil in fields of barley, peas, and yellow flowers with seeds rich in canola oil.

After a few days it became obvious that corralling dirt was only part of the secret behind ten centuries of farming the lakebed. Following an unsupervised daily rhythm, Tibetan livestock head out to the fields during the day, fend for themselves, and come home at night. Driving back through towns at the end of each day's fieldwork, we saw pigs and cattle waiting patiently to reenter family compounds. These self-propelled manure dispensers were prolific; even a brief rain turned fields and roads to flowing brown muck.

The night after finding the remains of the glacial dam that once impounded the lake, we stayed at a cheap hotel ... The proprietor advised us on our way in that the backyard would serve as our bathroom. That the pigs clean up the yard bothered me during our pork dinner. Still I had to appreciate the efficiency of pigs eating waste and fertilizing the soil, and then people eating both crops and pigs.


Dirt, The Erosion of Civilizations by David R. Montgomery
Posted by Matt at 11:58 PM No comments:

This came out very well for winging it:

Lightly toasted two thick slices of bread (that I baked this morning so nice and moist!).

Made into an open face sandwich.

Accompanied by a few Utz potato chips and a Hosmer Mountain Cream Soda (made with cane sugar, plus it's lower in carbonation then most sodas; most over-carbonate to compensate for leakage through plastic, but Hosmer uses glass bottles.)

Nothing like taking healthy garden veggies and making them into a typical American meal :D

Photos to follow...but I need to record today so I remember when six weeks is up :) Tried my first batch of making mason jar sauerkraut. Half a head of cabbage packed a quart jar (with too little left over to worry about). The other half made coleslaw last night.
Posted by Matt at 9:37 PM No comments:

Got some plastic lids for the mason jars -- thinking they'll do a better job storing yogurt then the plastic containers did. Also want to use them for nuts I buy in bulk -- my last batch of peanuts went stale sitting in the thin bag from the store :(

Oh, and that's the first pepper I can recall successfully growing sitting next to the tomato and white eggplant.

Last Saturday in the Garden

Starting to figure this out -- canned peaches today, pears last week (in the background, they'll all go into storage tomorrow):

Let's see:
1 Peck of No. 2 Peaches: $10
2 Cups local honey: $5 (I can find some local still but a bit cheaper)
5 Cups of Water
Produced 9 pints of peaches -- $1.60/pint, and I figure I'd use two of them per week on yogurt & granola for breakfast...compared to Strawberries which I think I was averaging about $3/week on last winter, maybe more.

Time wise:
Bringing the canner up to a boil initially: 90 minutes
Time to process the peaches (blanch for 2 minutes, then skin & cut, and pack a pint as we go with boiling syrup over them): 1 hour. Need the canner boiling before I start so it sterlizes the jars.
Processing: 25 minutes

So start to finish I'm looking at 3 hours, within which there's about an hour of actual work.