It started off as mindless but fun TV in Season 1, and sucked me in with Season 2 -- just a great season.  And excerbated fans during Seasons 3, 4, & 5!  Always on the bubble as their budgets got cut and they never knew if they'd be renewed.

But I'll still miss them -- the cast defined chemistry.  And they introduced me to a lot of great music!

Alan Sepinwall sums it up better then I can:


Most of all, though? It was, in spite of the potential for great heartbreak given the Sarah situation, happy. And if there is one emotion I associate with "Chuck" above all others, it is joy.

"Chuck" was a show with a lot of moving parts, mixing a lot of tones and styles and genres into a blender. Some weeks, everything worked. Some weeks, only some parts worked. Some weeks, we basically had to wrestle our brains to the ground to accept that the plot could actually work the way it did. But "Chuck" was a show where we forgave a lot because the joy of the show — both of the people making it and that we could feel watching it — was always so palpable. These people loved making this ridiculous show, and we loved them for it.

This is really cool:


Reminds me immediately of Temple Grandin and her work with Squeeze Boxes (ok, not the best video about squeeze boxes but awesome movie):

Autism Hug Machines
Posted by Matt at 3:59 PM No comments:

The Day the LOL Cats Died

Figures I waited until after midnight to remember to post this:
Posted by Matt at 12:24 AM No comments:

Got the window sill painted, put up Levelor blinds, and a valance: 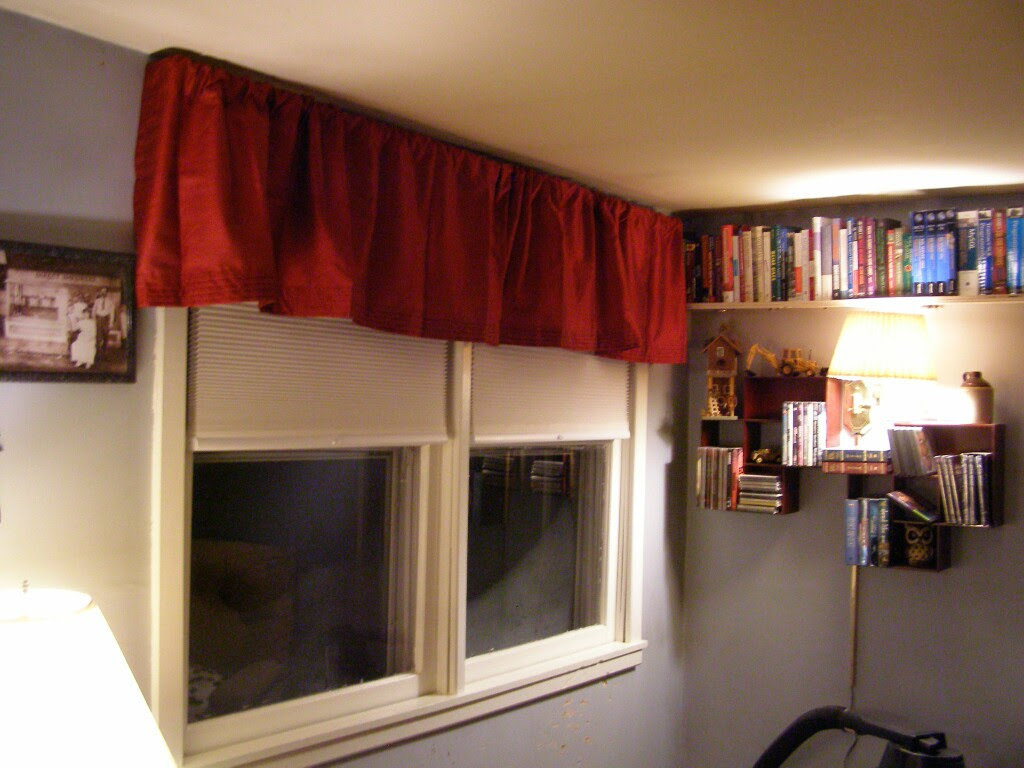 Should be invoicing a side job this week that will pay for the wood floors...so hopefully I'll have those in by the end of February and can start on building the desk :)

I can't remember when I started having my hair cut by Dick at Razor's Edge...4? 5? I did need to use the board used as a booster seat to fit into the barber's chair.

While getting my haircut before Christmas I was talking with Dick; I'm one of his longest running customers -- having gone to him either 36 or 37 of the 38 years he's been in the business.

It will be traumatic for me when he's no longer cutting hair, I believe in those 36+ years I've had my hair cut by someone else once, when he was on a vacation and his partner cut my hair for a wedding or some such thing.

Dick then mentioned with a sense of pride and awe he had just passed another milestone in recent weeks -- he had cut the hair for the fifth generation of the same family; and while the oldest members had long since passed away he's now cut the hair of a Father, Son, Grandson, Great Grandson, and the grandson had just brought in the Great Great Grandson for his first haircut.

There's two interesting concepts with how humans interact with each other and across time which that reminded me of. The first is the somewhat better known Dunbar Number. Most people maintain an extended social circle of around 150 people; much above 150 and groups tend to break up into smaller units. Or since we tend to live as individuals instead of tribes today, once you hit 150 you'll drop someone out of your social circles as you add a new person.

Now as anyone whose played Seven Degrees of Kevin Bacon know a person may fit into more then one group especially over time...but the group each person assembles around themselves will max out around 150 (from close friends to friendly acquaintances).

The second is the Human Unit of Time. Things like millions of years, or even a couple millenium; even going all the way back 250 years are fairly abstract concepts that people have a hard time understanding. But the Human Unit of Time is Five Generations, just like Dick's career milestone with that family.

The Human Unit of Time that people can reasonably understand how things have changed and how they will change, and what they most care about, because it's in terms of people you care deeply about stretch two generations on either side of you -- from your oldest Grandparent, to your youngest Grandchild. There isn't a precise definition of this in years; it's more then a century, less then two. 160 years -- 80 years back and 80 years forward -- is a good guess.

These define two dimensions -- a quantity (150 people) and place in time (80 years in the past to 80 years in the future). There's got to be a third dimension, something about quality...but I'm not sure quite what it is or would be.
Posted by Matt at 10:42 AM No comments:

Fortunately I'm not a punny feller, because if I was I'd have to make a corny wood cutter joke about finally getting a nice piece of ash on New Years: 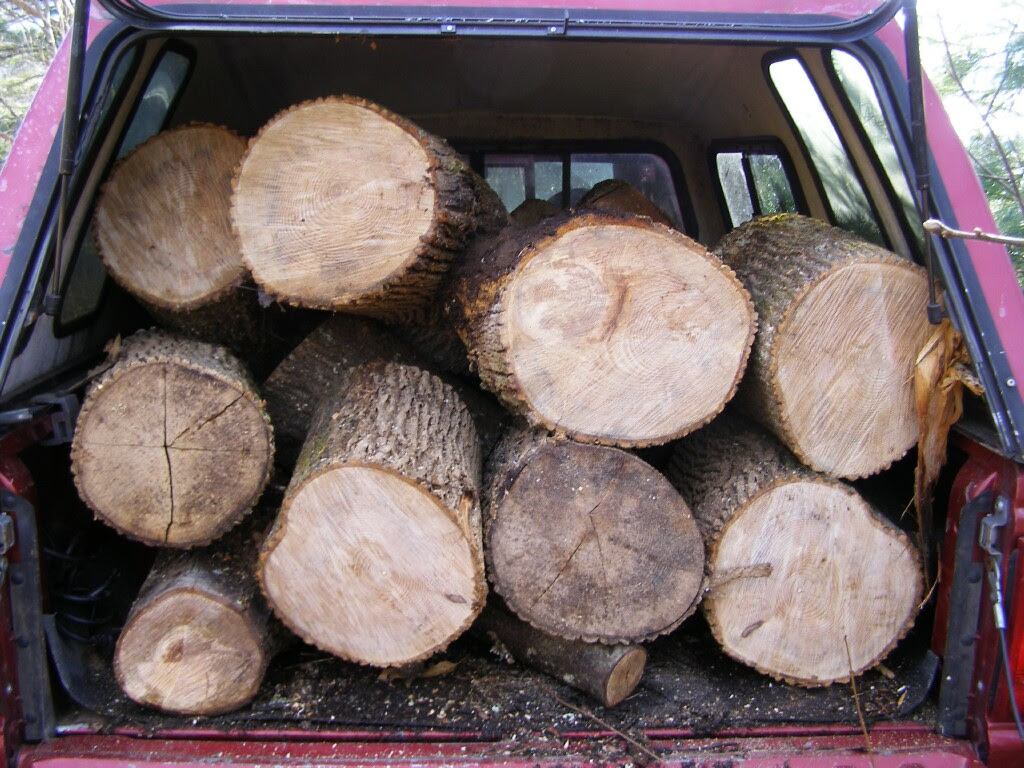 Picked up a box of kid's chalk for 99 cents at Target -- works MUCH better then a carpenter's crayon, but you have to be careful to hold it low less it breaks. 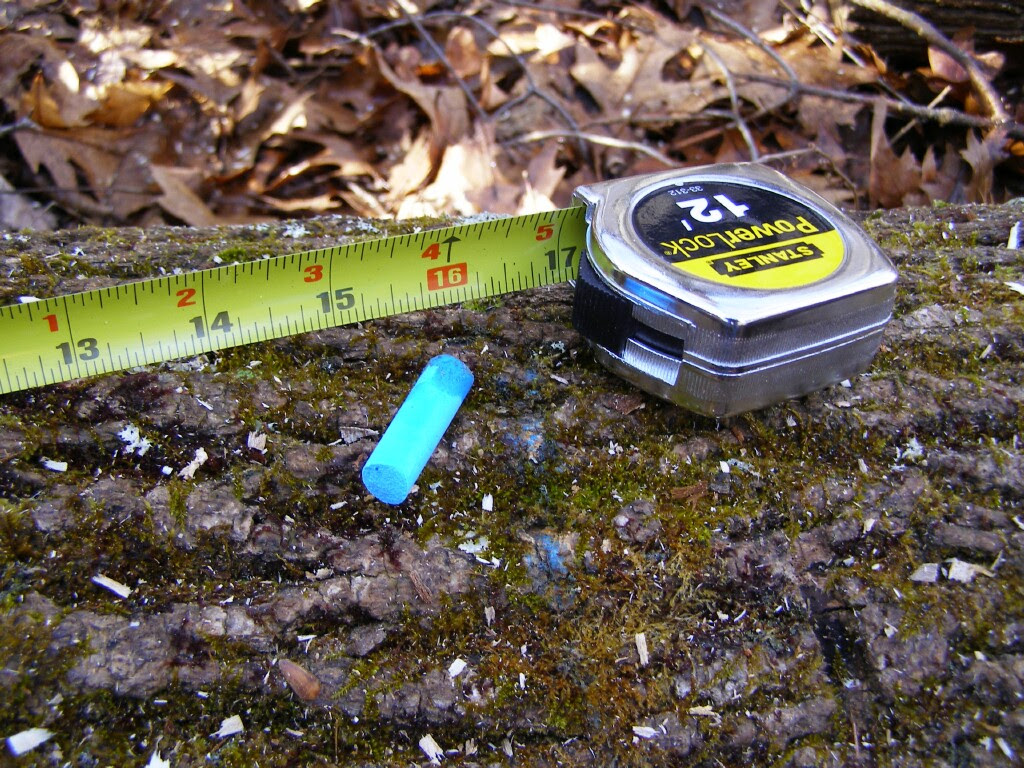 And working my way down the trunk. Cut the tree down a couple years ago and I've slowly been working my way down. I don't like working on hillsides but not much choice with this one. Awkard to stand on, made worse that there was a line of stones crossing this elevation (not sure if it's just the tip of a ledge or an ancient stone wall). No easy + safe way to roll this puppy either, so I use the wedges to keep it from pinching and try not to let the tip of the bar hit dirt as I finish the cut. 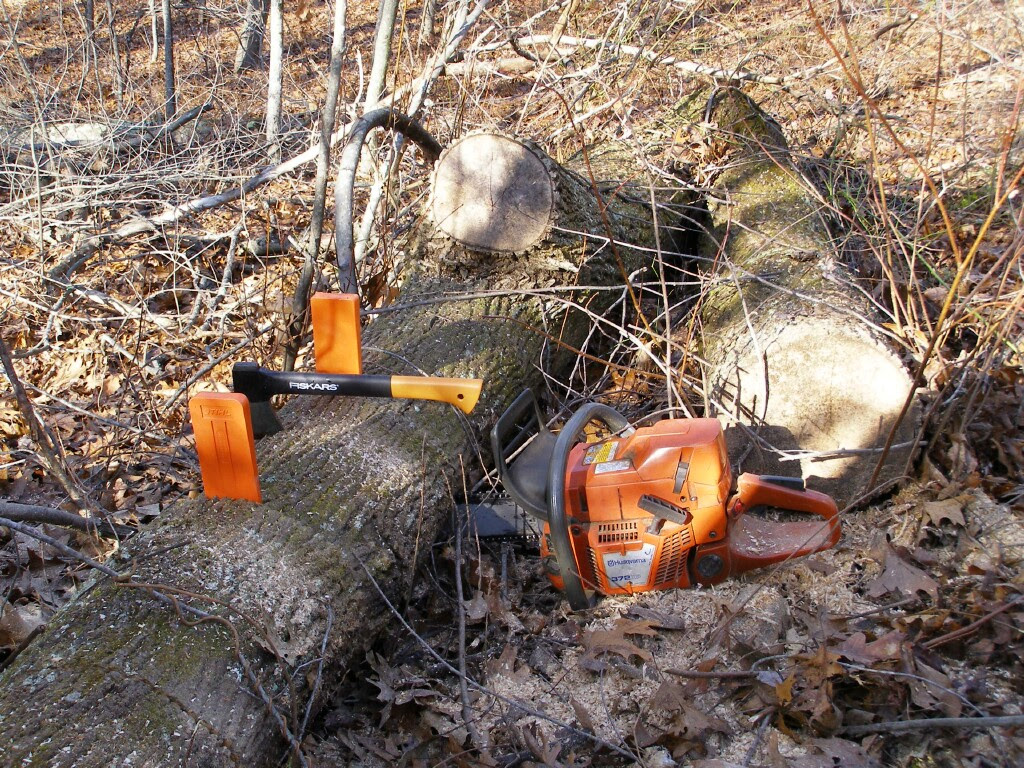 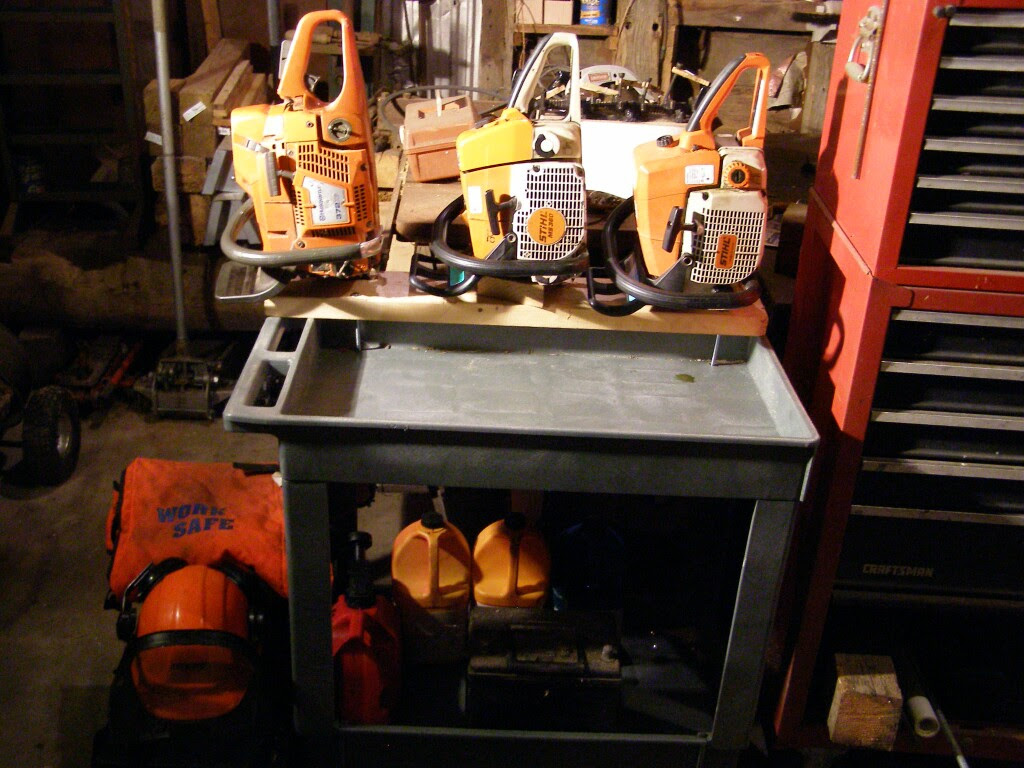 12/10: Hauled some logs up from further down the hill. I cut these to 8' and they were relatively small diameter so they were very easy to pull: 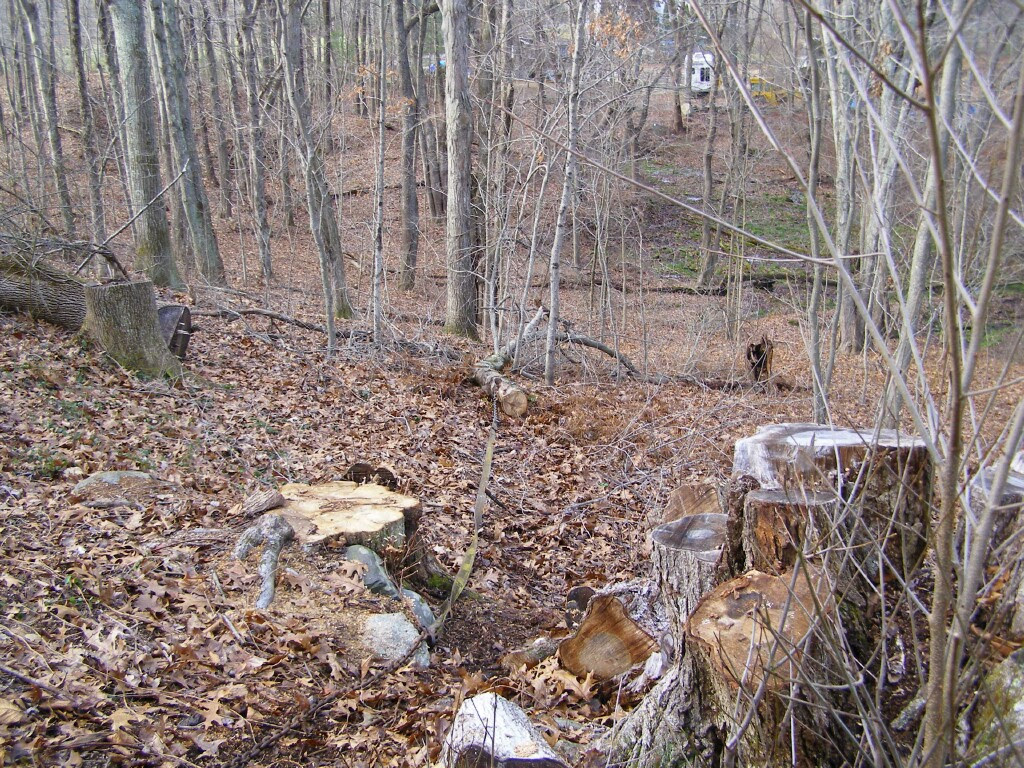 For these smaller, lighter logs having a grab hook shackled to my hitch worked out well. I don't have enough chain for the whole length, but between the tow strap then the chain to adjust the length it worked well: 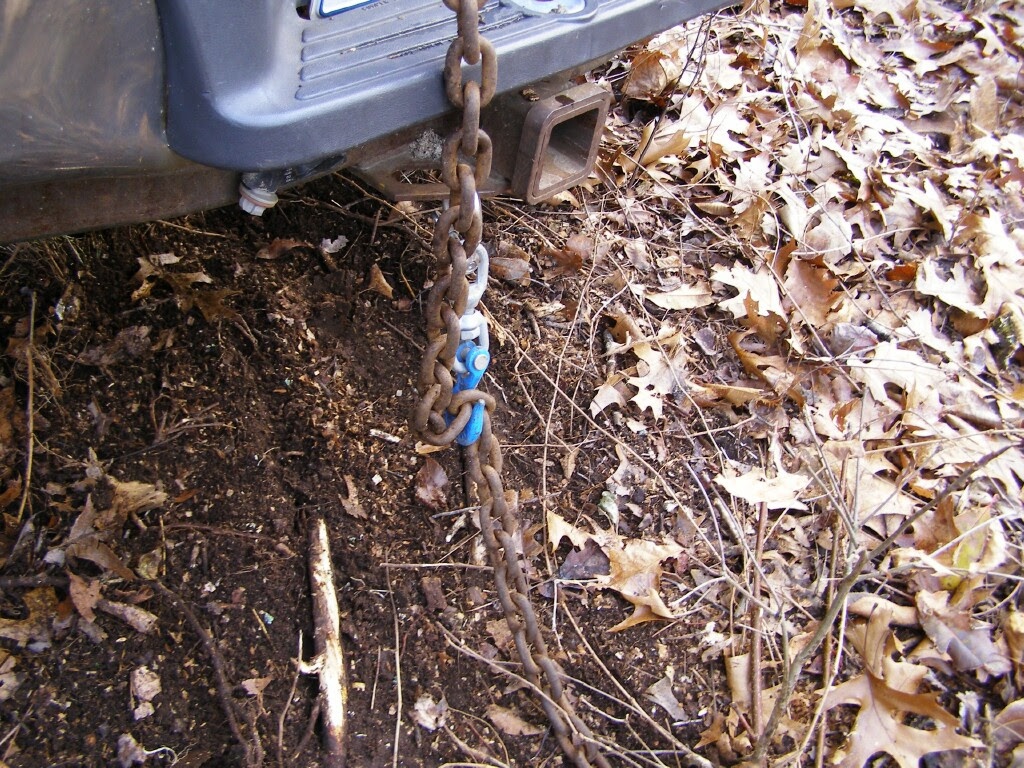 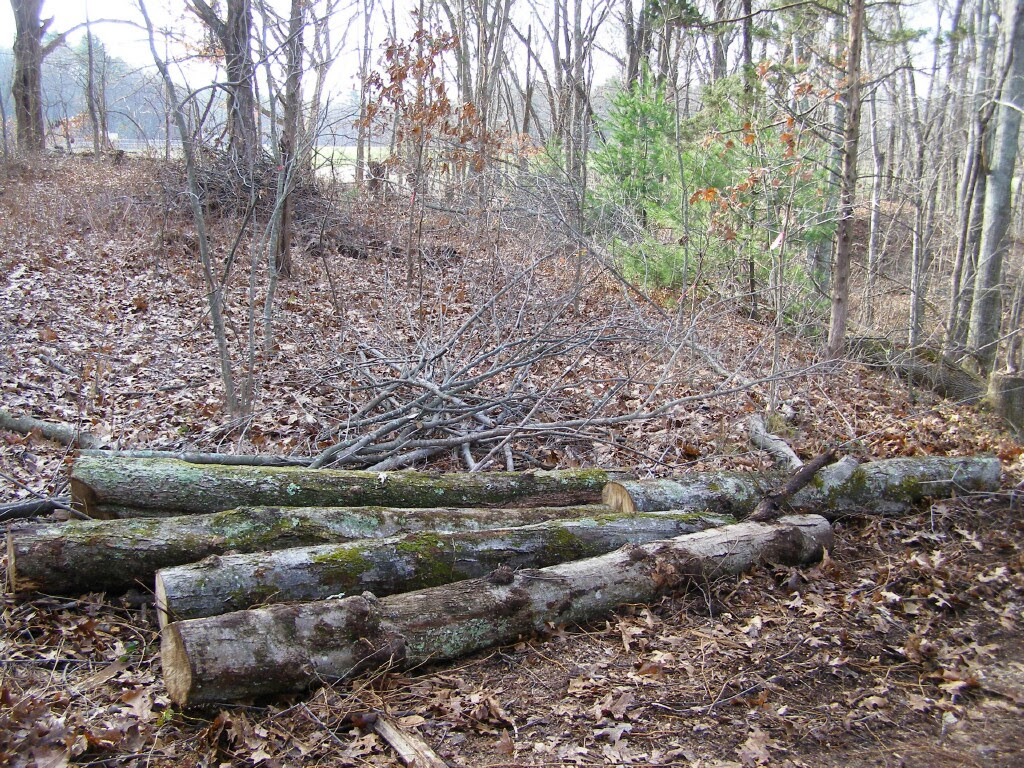 ...err, maybe not :( That's ALL off the wood in previous photo blocked up and loaded in my truck! 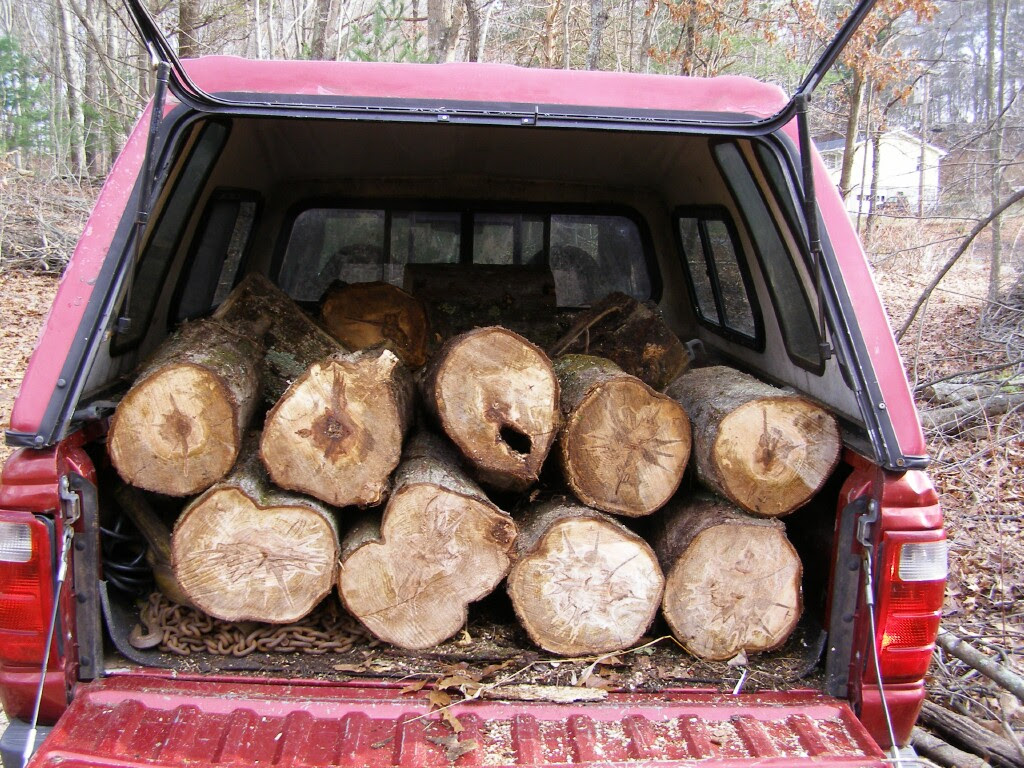 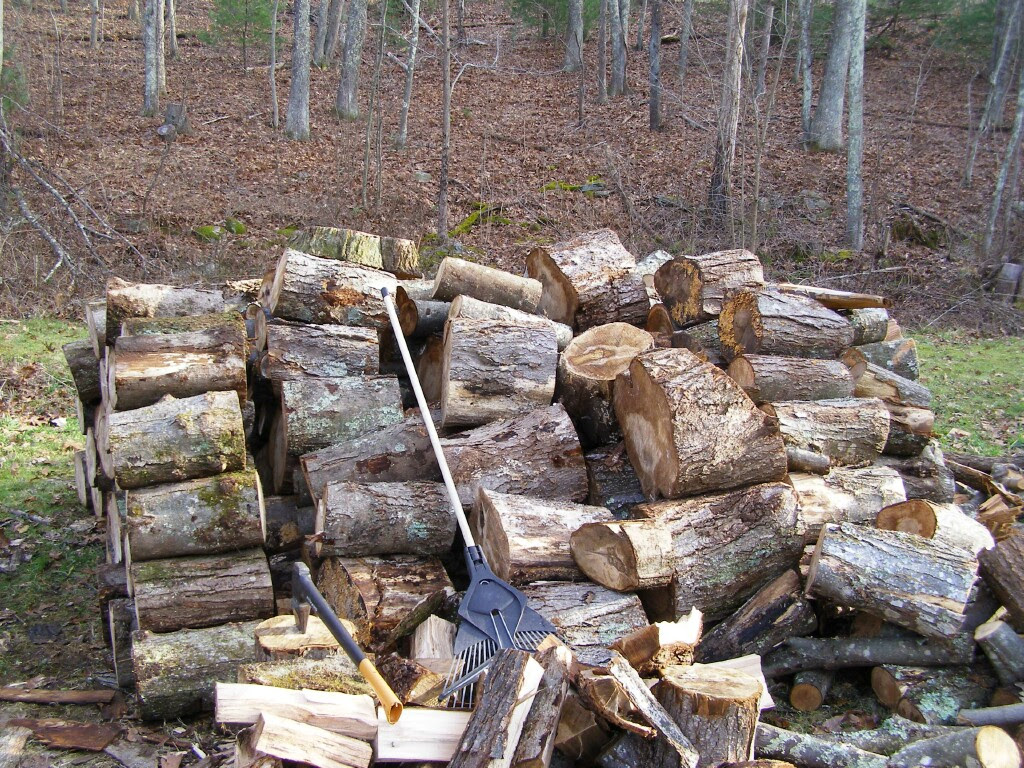 And the same day I rototilled the garden! Holy Hell, it's December 10th and I'm rototilling! Ground should have frost in it by now! It did start to consistently drop into the 20s at night starting that evening: 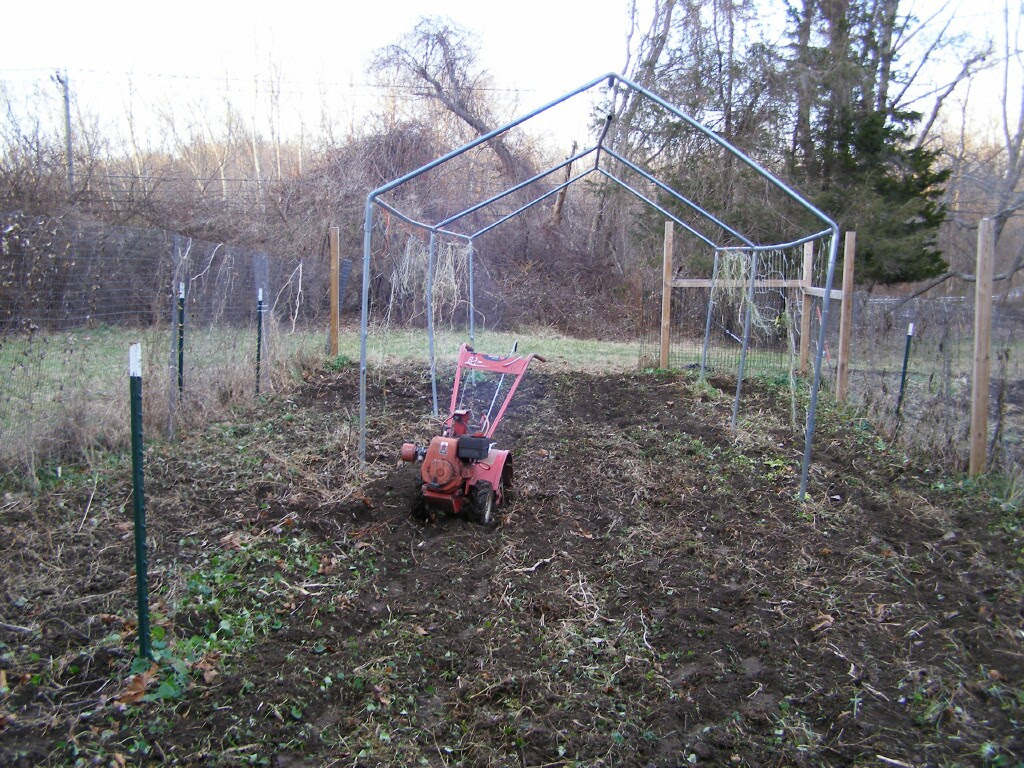 On the 11th I saw one of the strangest things I've ever seen. Had a huge flock of black birds up on the very top of the hill (Prince Hill & Gorman Road) when I was out cutting firewood. Even heard them come down flying towards where I was working before they turned and went towards the town park. The next day I had a Alfred Hitchcock seen as they descended on my hillside -- picture doesn't do it justice, they covered the entire slope you could see from the house. Spent about 90 seconds just tearing it up. Acorns? Worms under the leaves? I don't know! 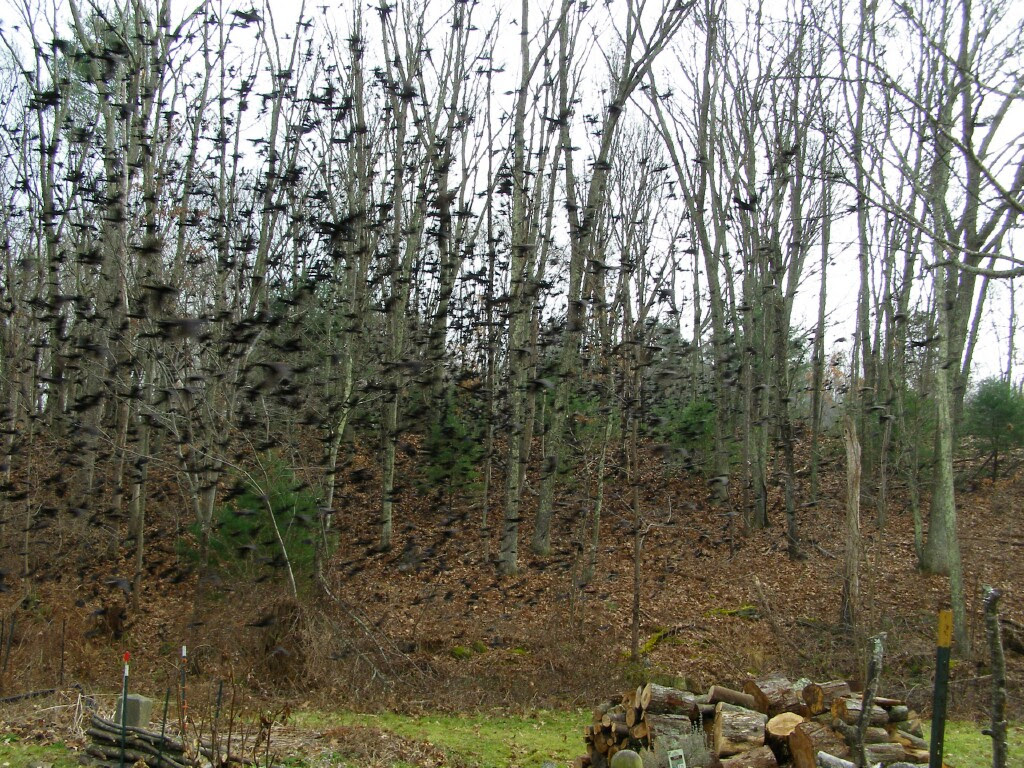 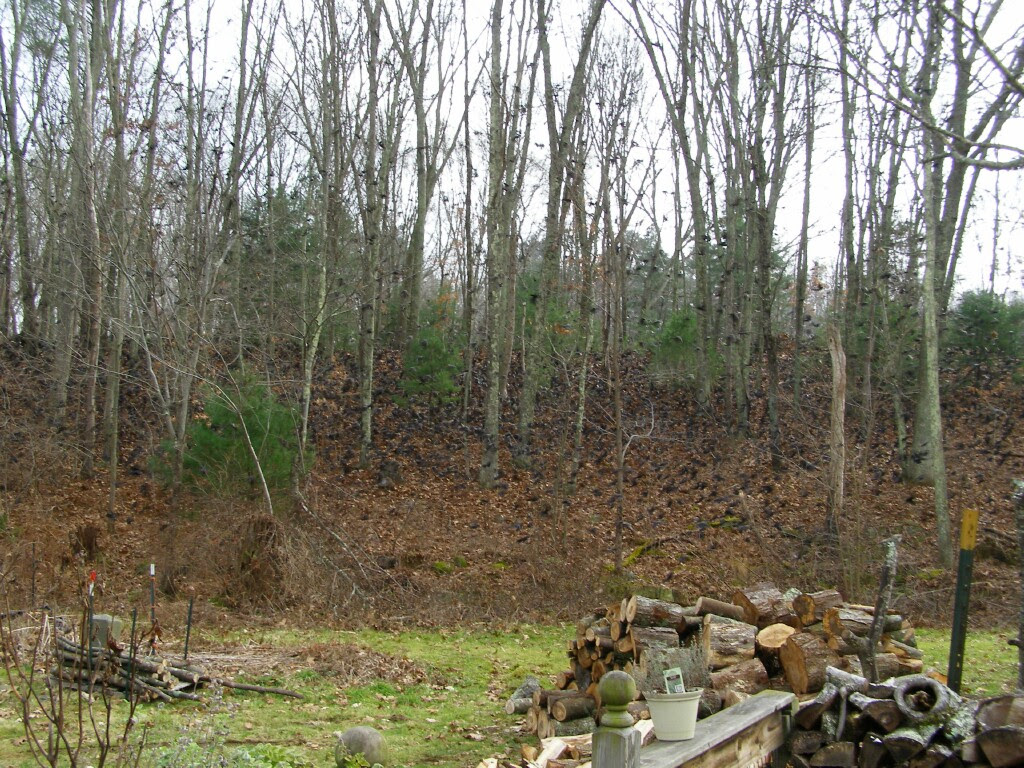 About an hour later I went out again and there were a bunch of chickadees, blue jays, and robins gleaning the area. And even a couple woodpeckers up on the trees!
Posted by Matt at 8:22 PM No comments: