Took me a while to find a snatch block that:

a) American/Canadian/Australian/Western European made;
b) Reasonably priced. 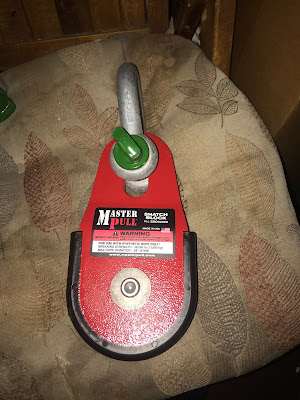 Yep, has a great feel. Not greasable, but it's not like I'll be using this on a regular basis. Being bearing, it has less rolling resistance than the "rings" due.

This combination was $105 for the snatch block, $16 for the shackle. (I bought a couple extra shackles to hit the free shipping total).


Compare that to a Warn Epic snatch block rated at 12,000# and Epic shackle which is currently running about $145 combined on Amazon made of the Chinesium you might trust just because Warn was willing to put their name on it...

(And it's not that China can't produce really high quality stuff, they can and do -- it's just the marketing position is usually Western companies wanting to maximize profits buying from Chinese trying to maximize profits, and dealing with a den full of Ferengis. Then add in the Amazon distribution system that easily allows counterfeit goods so you may not be getting an actual Warn snatch but a counterfeit...nope. Items that would show signs of failure early and easily like tree savers and tow straps? Much less of a concern for me for either China or Amazon. Metal that needs proper casting and finishing? No chance.)

Does it have all the features I'd like...having the Country of Origin and WLL limit stamped instead of being a label (though the label feels very high quality) would be my preference, and that's about my only criticism. However I also plan to store it within a Crown Royal bag within my gear bag so that should help protect the snatch block. The shackles will go in their own bags as well (to help reduce metal-on-metal banging). 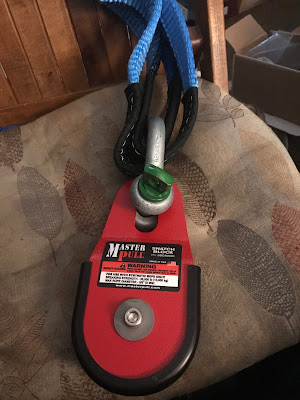 Am I the only one disturbed...

Or OCD triggered or something...

To see this up on a bench without first steam cleaning / pressure washing / something all that crud off :eek:

In the morning I put the new-to-me BFGoodrich KM Mud Terrains on. Fronts have 12/32, rears are never used before spares with 19/32nds.

Marked the Firestone Destination All Terrains (which I can't speak highly enough of) with where they came from, need to rotate when then go back on. Plan is for the Mud Terrains to be my "club" tires when I know I'm doing serious off roading.

I'd end covering 70 miles and six hours before getting to Erics :D

But first, the videos!

From Eastford to Sturbridge:


Jeep winch squaring up the playset so it can be braced:

Boston Hollow had a lot of trash...I ended up turning around and doing a stretch of it. Most I could just drive slow and grab the stuff while still in the driver's seat. Three loads out of Boston Hollow.

Fire hole dry as a bone in the Mountain Laurel grove.

Another fire hole. I think the impressive thing here is the State is obviously keeping the access to it cleared.

Oh frapgioius joy! Skopec Road in Nipmuc to the Bear Den area is open again!!! The cheap Tractor Supply gate is gone, and they've put in a new bridge / culver, and a new heavy gate but it's open! It's been years since I've gotten in here.

Holy In-Holdings Batman! I saw on the temporary gate, and this gate, multiple locks. I was thinking it might be for cell towers or loggers...

But it is actually a house way, way back in the woods! I'd be fascinated to know the whole story -- it looks land locked; did they used to have access off Bear Den over other private property? Was property the state acquired for the forest encumbered by a private right of way to reach this parcel? 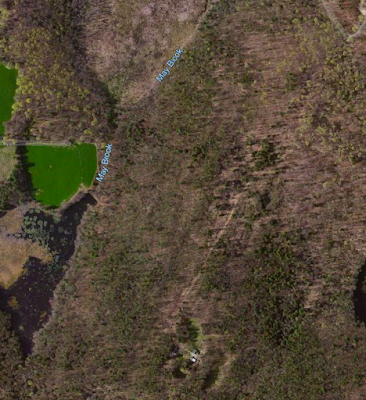 It's a darn good bet when you see roads this well built in forests in Connecticut, that's CCC work for "fire trails."

Between Boston Hollow and finishing up in Nipmuc, another full bucket. I'd end up collecting another 1/2 afterwards.

Sweet, someone's been through here...don't have to chainsaw my way through Old Mashpaugh / South Wales Road :)

1) Yes, it's soupy enough I'm the better part of a mile from pavement and someone put warning cones up at the other end of this mud puddle;

2) As I'm doing my third or fourth attempt to pop out of the exit to the mud...I'm thinking it's a bad thing the bag with my winch remote and tree strap are in the way back;

3) Laying in bed Sunday morning, I realized I never turned on my lockers which is likely the only reason I had an issue :D.