Well...this sort of worked out.

Couldn't get late checkout at the hotel in SLC, so I headed out a couple hours sooner than expected. Stopped at Best Buy for the cheapest monitor they sold and a USB headset to use on Teams calls this week since this is my week working remote. Started at 6:30 local time and quit at noon when my check out time was.

"Planned" to stay in Fillmore. Figured that was half way to Hurricane I wanted to go this weekend, 2-1/2 hour drive was reasonable later in the day.

Except I messed up in my mind and only booked Tues-Fri, and today is Monday o_O. By the time I even thought of it I was already south of Nephi, and walking up to the hotel multiple signs said "No Vacancy" which included my poor planning self.

At this point I was an hour from the nearest hotel with vacancy, and Hurricane was only 2 hours away, and I was running earlier than I had originally thought so pushed on down to this area which I'm in the end happy with even if I'll pay a bit more for the hotel room in a nicer area. 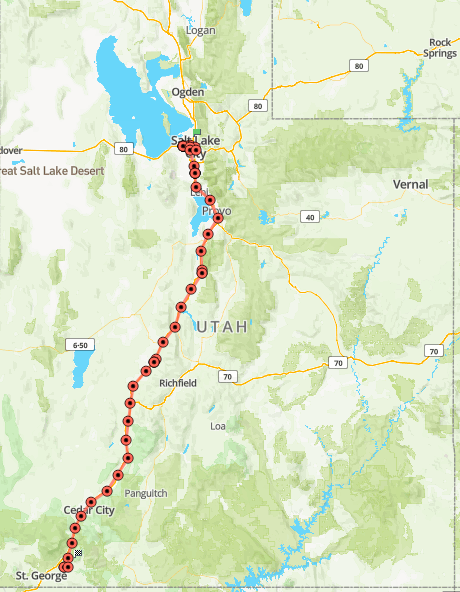 I'll be here at least till Monday morning. Think my next two steps will be a 5-1/2 drive to Evanston, WY (I can get off I-15 in Provo and avoid most of the SLC traffic), then the next day a 3 hour drive to Jackson, WY which will be my base around Yellowstone...Jackson being about an hour away from the south entrance.

Not many photos today so it was quick for me to go through them. Won't be much if any photos rest of the work week...but that will give me time to go back and get caught up with the breathtaking ones from when Eric was out here.