I used to do a good amount of target shooting when I was young. But I never shot at an animal.

My father, who grew up on a farm, tried to get me to go hunt a rat one day that had hitched a ride home from the dump, but the thought of killing a mammal didn't sit well with me.

Sunday morning I decided the rabbits in the garden needed an acute case of lead poisoning. I haven't had the target rifle out in 10 years, took me four tries on two key rings to find the right key for the trigger lock. Aim was dead on, but I forgot how loud the crack was -- even for a .22 long rifle.

Today I picked up some "sub sonic" ammunition -- you still hear the fire cracker like pop of the cartridge, but the bullet doesn't break the sound barrier so you don't get the sharp crack you normally hear with gun fire. Attracts even less attention from the neighbors, and I'm pretty private anyways since you can't see another house from my yard when the leaves are on the trees.

Connecticut regulations, as I understand them, allow you to kill nuisance small animals that are destroying property -- there isn't a difference between a mouse chewing a hole in a box of rice or a rabbit eating lettuce in the garden. You're also allowed to discharge a firearm within 500' of an occupied building provided you are within 500' of a building you own or lease. So legally I believe I'm covered. 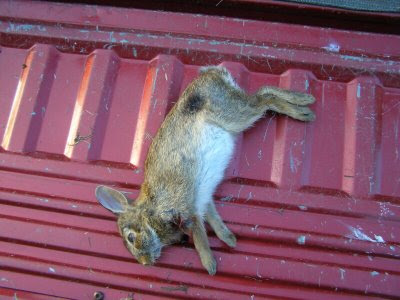 One rabbit down. The other two managed to stay out of view until they got into the woodline and disappeared, so we'll have to revisit them. It's interesting to me to observe their behavior and how quickly I'm devising ways to hunt them in order to drive them in a direction I need to get a clean shot.

I killed the rabbit -- no malice, and no joy from the killing, but satisfied I accomplished it. The equation was simple, they are doing too much damage to my garden and the cost of a proper fence in time and material is more then I can spend right now. The ground is extremely stony which makes stretching a fence very difficult since even T-posts can't just be pounded in. In past years hawks or foxes controlled the rabbits, I don't know why this year the rabbits have led such an unmolested life.

I'm also comfortable knowing my gun shot was no more cruel then the death from a hawk or fox, and likely quicker. It certainly was less stressful then what an animal goes through when caught in a Have-a-Heart trap for hours on end until someone checks it. Have-a-Hearts are for one purpose, so you can release non-target animals if necessary; I strongly disagree with the relocation of most animals, particulary common pests like rabbits. You're relocating your problem to someone else, often animals have no den or hiding place they know of so they become easy prey, people often release animals in the wrong locations -- like woodchucks in the woods where they starve if they're so unlucky as not to quickly become coyote chow, many animals are territorial and will fight with their same species in the area they're released, and it's a vector to spread wildlife diseases like rabies faster then would naturally occur. If an animal is a problem, and it's not a rare species, and you can't easily fence it out...it is perfectly ethical to kill it.

My only regret is I don't know how to dress a rabbit, and particulary what to look for in contamination (such as perforating intenstines) that may have occured from the gun shot, so the meat I was not able to use.