Before there were chainsaws.
Before you had general purpose tractors with belt PTOs (power take-offs).
This is a buzz saw, usually used for cutting logs into firewood length pieces. For safety sake the blade which normally would be on the left side of the rig is not installed.
Going back to the Connecticut before the 1930s, our woodlands were much younger on average then they are now, and burned frequently (a story for another post). A typical cycle would see a pasture used for 20 years or so, with brush and trees slowly taking over until the farmer let it rest for another couple decades as a woodlot. It would either then be managed as a perpetual woodlot, or after 20 years or so be clearcut back to pasture.
In winter time the logs could be easily skidded out to a landing, and if necessary sawn by hand to shorter logs manageable by men. They would then load the log onto the buzz saw and cut it to firewood length (18" -- 24"). Buzz saws powered by tractors are still a great way to quickly cut up smaller logs, even with today's chainsaws. As you look at this old saw rig, think back to the hurricane of 1938 -- that was before modern lightweight chainsaws and woodchippers, when everything had to cut by hand and hauled away in large pieces! 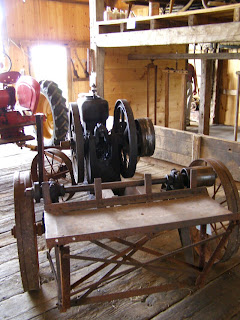 Here's a side view of the engine.
This is a "hit or miss" engine, meaning it has a governoring system that didn't fire the spark plug until the RPMs dropped below a certain point. They have a distinctive sound when running, particularly when not under a load.
According the plate on it, it is a 6 horse power engine -- back when horse power was horse power, not the marketing nonsense the companies engage in now! 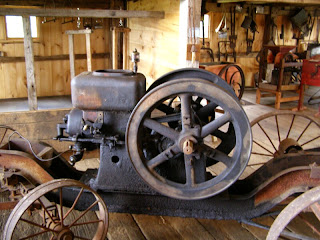 Both pictures taken at the Brunn Barn, Woodstock Fairgrounds during the Old Iron Tractor Show on June 1, 2008. The exhibits in the barn are on permenant display, so you can browse them while at the fair.