Actually, I think I've had them for a few years but never at a level to raise concern.


This morning, I found them marching through my lillies like Sherman through Georgia. I look at these lillies everyday -- there right by the deck railing I lean on when the dogs are out romping in the yard. This damage came on dramatically fast.

The larvae carry their own excrement on their backs, which makes them look like bird turds. It's an invasive species, with no natural parasites in North America -- although URI has been releasing a parasitic wasp from Europe in hopes of establishing a native population of parasites to keep these beetles under natural control.

Here's one with the excrement pushed back a bit -- you can see more feeding in the background undisturbed: 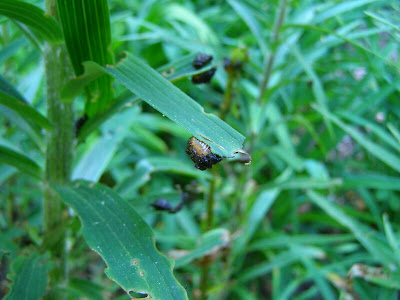 I didn't have time today to hand-pick them, and due to the extreme damage being done and the rapidness I resorted to spraying with Sevin. This proved extremely effective. Still looks like I lost at least 6 young lillies that were completely defoliated, and perhaps 40% of the more mature lillies sustained significant foilage loss exceeding 50%.

There are less severe ways to control them such as Neem -- see this link: http://faq.gardenweb.com/faq/lists/neweng/2002040522017914.html . Looks like Neem will be on my shopping list for next year, along with searching for egg masses.

I estimate 1/3rd of the damage seen here occured between 8am and 2pm today: 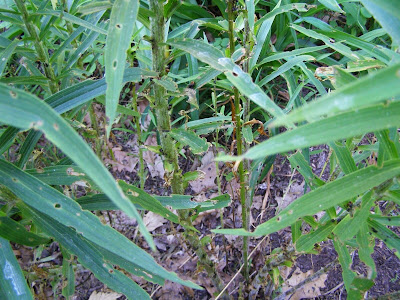