Saturday, February 1st I went up to Ham Radio Outlet in Salem, NH since I wanted to take a look in person. Got the Icom ID-5100A mainly because I liked the amount of information it's screen can display (seemed more flexible/more characters than others) since I'm planning to use it for a fire scanner as well as ham radio. 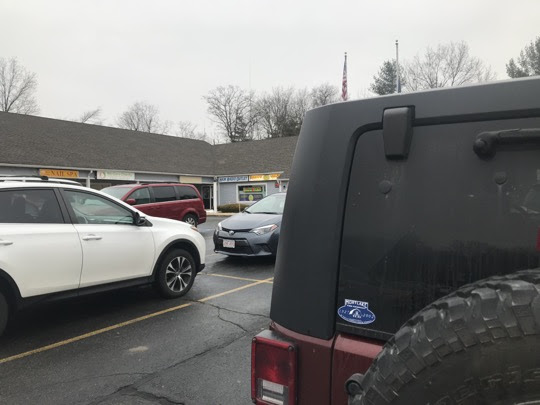 Ended up re-purposing the mount I had to take trail movies with the phone to hold the head. Stopped at Michael's and picked up some foam board to make a little support. I can't have it flush with the dash (the "arms" on the holder spread) but I probably can lower it down to 3 or 2 pieces of foam. Waiting till I have it running so I can see how the ergonomics are. 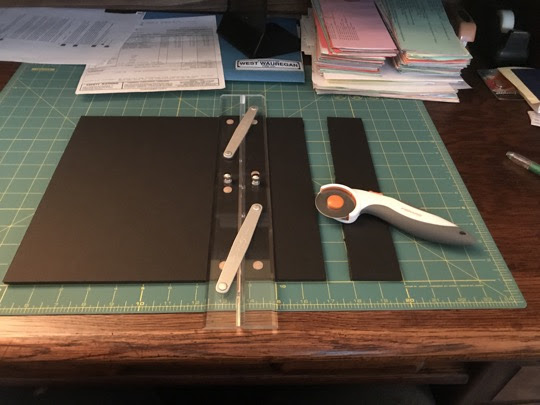 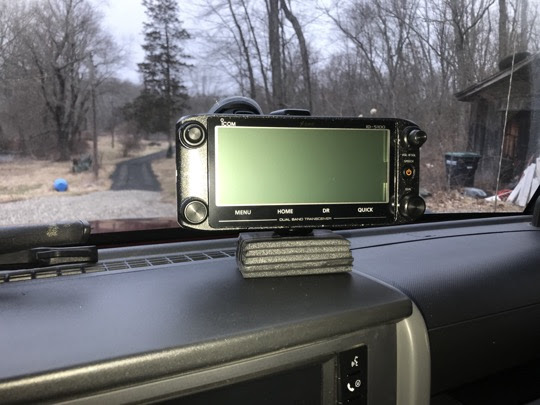 Sunday 2/2 I got the antenna and base mounted, ran the cable between the head and base. 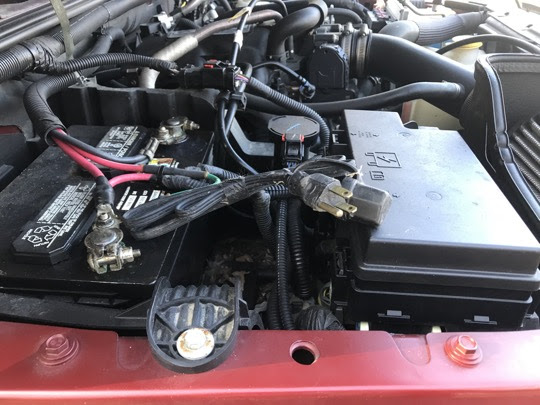 Base fits nicely under the glove box. Just have a couple really heavy duty zip ties holding it in place, which I think will work fine (and save a smidge of mounting room not needing a bracket). 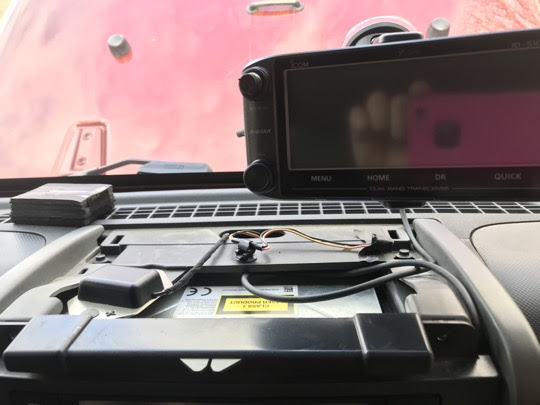 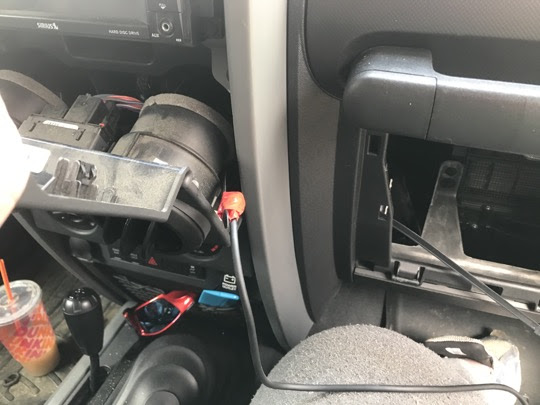 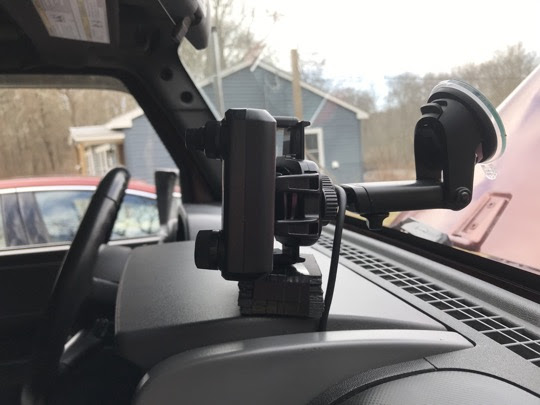 Sunday 2/9 ... got the wires run. There is a foam plug, but two things:
1) It isn't this round size the whole way through. It becomes square.
2) I don't trust that Chrysler finished the hole like the should, and I didn't have room to spare to fit a plastic bushing plus the wires I needed. (Never mind the square end meant I could just get a round plastic bushing to go through it. Grrrr. 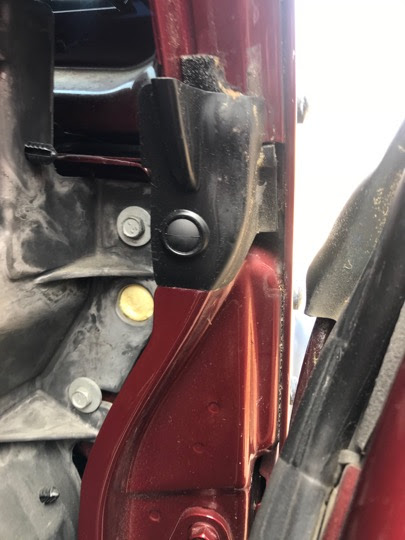 Several attempts at getting the wires through until I figured out the shape of the opening. Finally used a big zip tie and loads of electric tape to get them through. 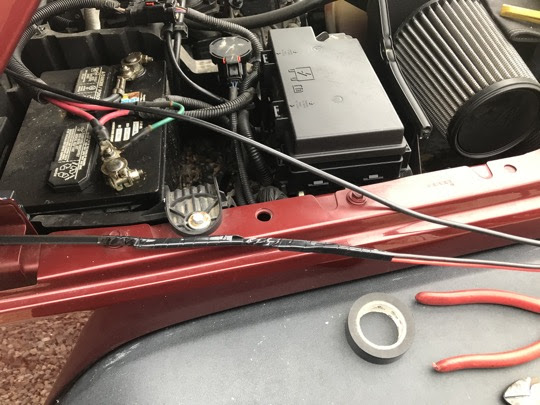 I pushed in the split loom to cover the wires as much as I could from both sides to hopefully minimize problems with wires chafing.

Next nice warm day I also need to put in a couple stick-on zip tie holders so I can secure the split loom on the engine side to minimize vibration. 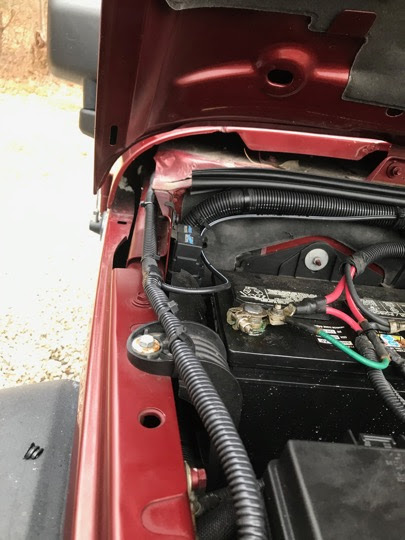 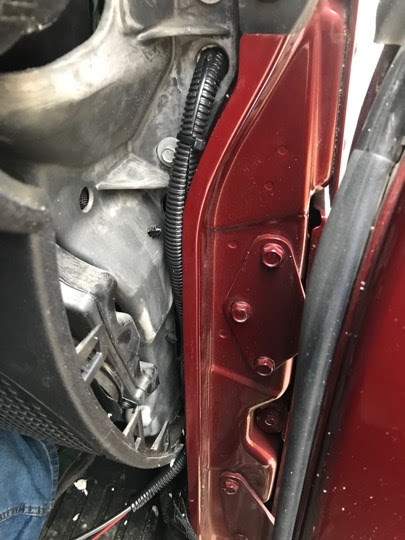 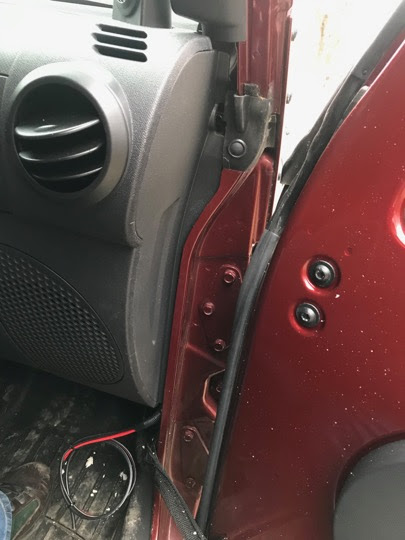 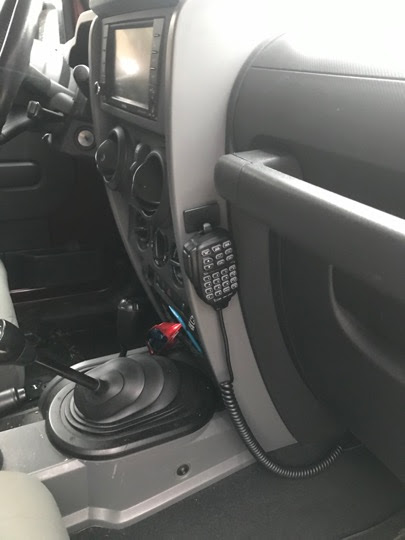 Still to do:
One evening I'll get the power controller-to-base wires wired in and shrink wrap the connections.

Next good day I'll need to get out to the jeep with an extension cord and soldering iron and solder on a new PL-259 antenna jack and solder the rest of the power connections together.

THEN I should be ready to radio check for the first time in about 20 years :D

16 February 2020 update:
Guess I didn't take any photos on the inside finishing up the wiring...EXCEPT...dumbass me looked at the PL-259 connector I needed and neglected to hit 'buy now' on Amazon so I the part I thought I ordered I didn't :/ 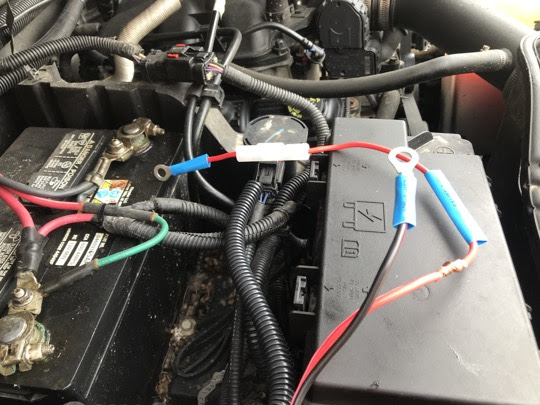 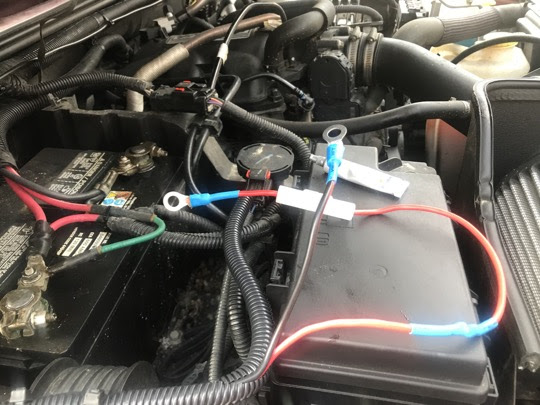 Ground wire is a bit deceiving, from when I split the wires there is a bit of red on the inside of the black cable. 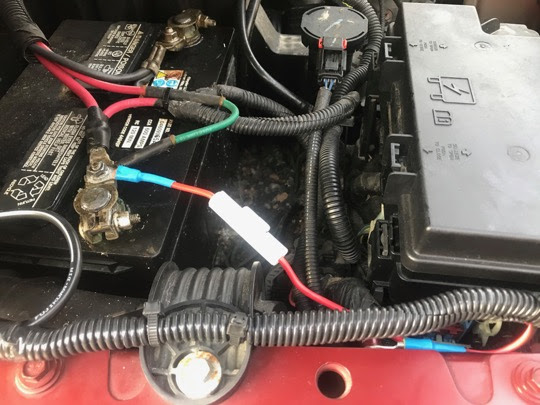 The power controller fit up under the glove box, there is a void area between the glove box and the plastic panel on the cabin side. I wasn't able to figure out a good way to really hold it in place -- the plastic panel is curved so double sided tape doesn't seem to work, and there doesn't seem to be a place to zip tie it. Not ideal, but I'll think some more. Maybe zip tie then put the panel back?

Anyway the unit works...radio turns on when you start the car, and turns off a few minutes after the car is turned off.

Well hopefully the soldering job was OK. I'm not very experienced at it. 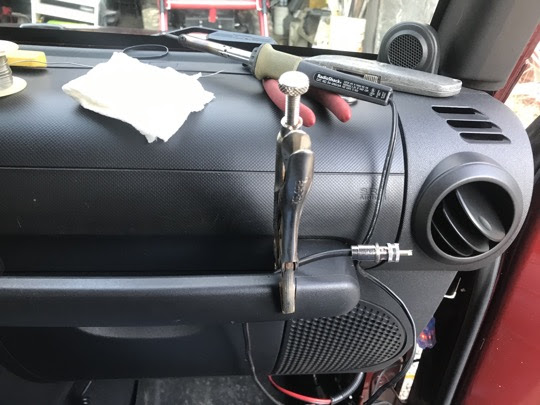 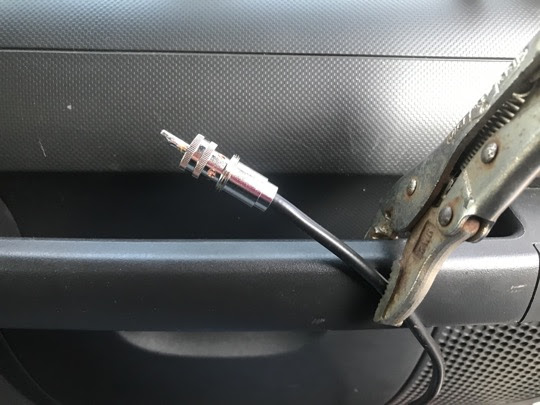 ...I did some firewood while letting it cool, and screwed it in. Came inside to get frequencies to program then work called so I still haven't gotten to actually do a radio test :/