Not off roading when it's forest roads that are (mostly) maintained.

I say mostly maintained because this is emblematic of Connecticut DEEP and the land of almost right. They didn't blow the leaves out of the gutters this year. I've witnessed them doing this in the past -- it's just a large PTO driven leaf blower on a tractor.

So you get this -- water coming onto the roadway which will cause erosion. I'd half expect if someone in the department in Connecticut that is charged with both picnic tables and regulating telephone rates (I'm not making that up) to react by writing a memo that gates should be installed to exclude the public to prevent erosion.

Fayette Wright Road, Fayette Wright being listed in the Holstein-Freisan Directory of 1913.
Turns out, with a bit more research, Wright of Pomfret, Conn. was a State Senator (at a time I believe they also acted as County Commissioners); a delegate to the 1920 Republican National Convention; and served on the Board of Parks & Forests from about 1922-27. This road was built by the CCC and no doubt named in his honor.

It is not like they don't do work at all...nice new culvert installed, with modern-ish guard rail (looks like re-used from the scenic guard rails formerly used along Route 169 and replaced after 20 years because of premature rusting that mainly looked like it was occuring on the ends that bent to the ground to form reverse "cow catchers" to try and keep vehicles on the road).

I'm not joking about the gates...this road was opened out to Route 44 through 1989 and closed during the made-up financial crisis of 1990 when Weicker was pushing through the income tax and closed visible facilities whenever possible. Used to use it regularly when working for the state parks in summer to go get fuel at the Natchaug maintenance shop. The 44 side is now blocked with boulders, and this gate is closed during mud season. (And I don't even mind too much closing the roads during mud; although I'd like it if they left the roads open when it was hard-frozen ground with snow over it.)

The road between Kingsbury & Morey Road having had new culverts and new gravel & grading following (I presume after!) logging to remove gypsy moth damage.

Update: You can still see the "remains" of this old farm where King Road comes into Fayette Wright (if that is the proper name for this northern section) as a more cleared area in the forest and a cemetery. This 1934 aerial photo you can also see the old road leading to Fay Road which is on my list to go down during a dry spell -- it looks like it may get a bit muddier than I like to go down. BUT, the key item is...what the heck are the structures I highlighted? That may take some exploring if my knees ever heal up enough to try. Part of my thought little fish ponds for a hatchery, but I don't think there is enough fresh water flowing up there to support that. 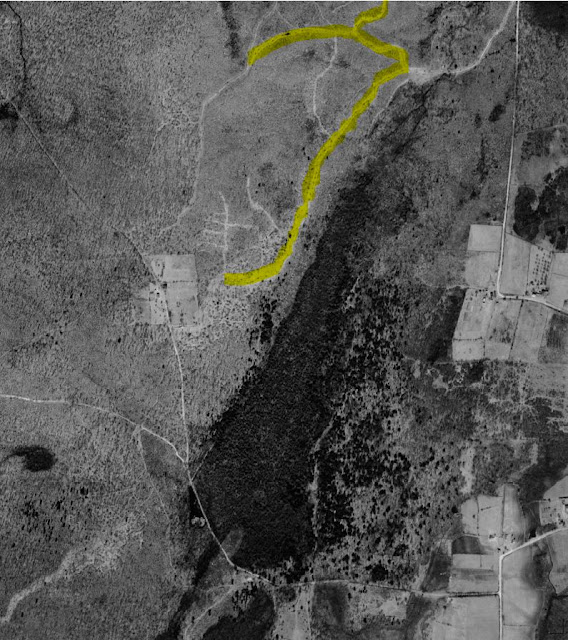