The Mother of All Garden Updates

I normally don't worry about planting till we're well into the May 20-somethings if not Memorial Day weekend. Besides frost, I don't think things like maters and eggplants really do anything till it gets warmer.

But I have to go into work next Saturday from 11pm to 3am (we're moving computer servers while no one is using them)...so that's going to shoot next weekend to heck.

Decided it's been a warm spring, rain predicted all week will keep the frost away, full moon next week, all signs say it's safe.

So up to Putnam's Farmer's Co-op where I get most of my stuff. Did stop at Hart's afterwards to pick up a few things -- esp. eggplant that the co-op didn't have. At the Co-op Charlie the manager was telling one of the customers (after stopping his kid from playing with scale they use to weigh seed) that the scale was there when he started in 1970. I wonder how many tons that hanging scale has measured over the years.

On the way home from Putnam I stopped to grocery shopping.

I see "Arvi" as a license plate on a car pulling into a spot, hey I know that one! It's my aunt Gert (her husband was Arvid, named after my grandfather...though everyone called him Donald day to day). Got to park right next to her.

They were the most into their garden / small farm of my aunts & uncles growing up, and my parents frequently went visiting there. (Plus they had a pool on hot summer days!)

They had a big garden, and many evenings I'd be reading through their Organic Gardening magazines in the late 70s while my mom & dad were in the other room visiting. Plus they had sheep and a cow (and a fridge full of raw milk) and Old English Sheepdogs, and a tractor and a diesel pickup truck and no sink in the upstairs bathroom (you used the faucet in the tub!) Such a cool place to visit. One of their daughters taught me about electric fences (as a five year old, you can keep yourself entertained for a *shockingly* long time hold a long, fresh of grass up to the fence...the cool thing is you see the grass jump faster then your nerves can carry the sensation of shocking to your brain!)

Got to chit chat with her a bit as we walked in and started shopping. Also found out she likes to make tomato wine -- something I had never heard about before, but so fits. I remember one time as a kid going over when her and the daughters were trying to clean up from the disastrous experiment of making maple syrup on the stove...maple syrup was fine, but the condensing steam had left a tacky layer of sugar all over the kitchen, into the cabinets, etc! That took them weeks to get everything clean again.

Neat timing for a gardening day to run into one of the folks who, while they probably don't realize it, had a big influence on how I view how a home should be. 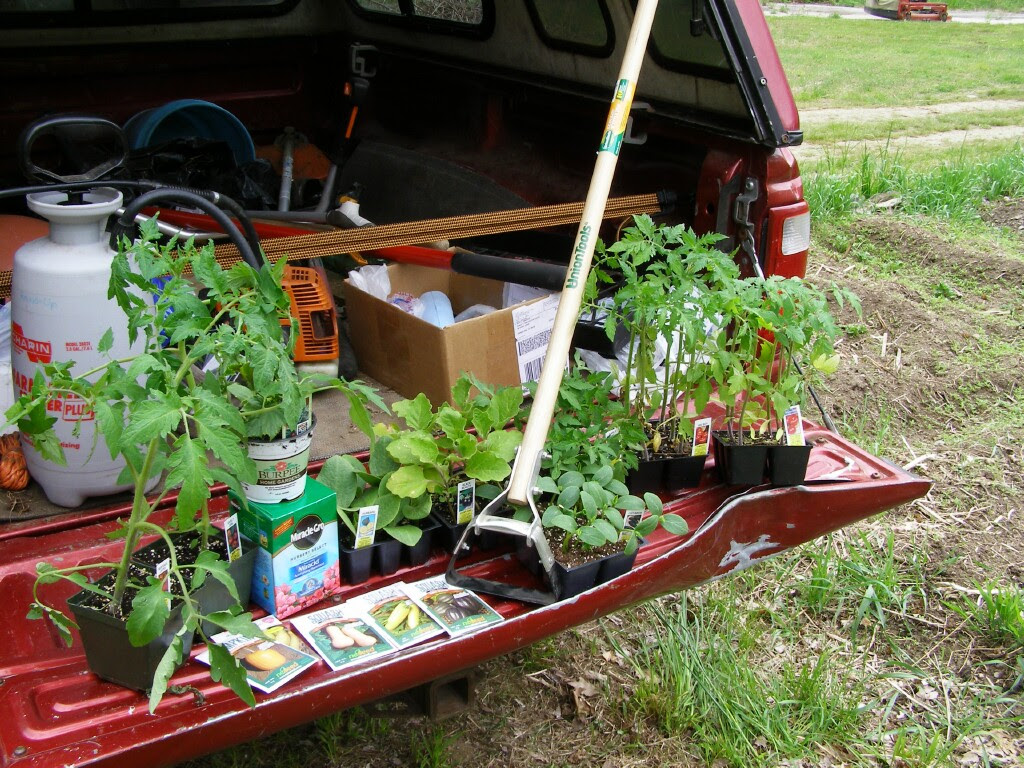 Let's see...
6 pack of Celebrity Tomatoes
6 pack of Big Boy Tomatoes
6 pack of Early Girl
4 pack of Cucumbers (I've had a long standing problem with my cukes succumbing to insects before I get a decent harvest...this is the first time I've tried seedlings though. Maybe they'll mature before the bugs!)
6 pack of Black Beauty Eggplant (Hart's)
6 pack of Blue Hubbard Squash (it's a trap crop -- Squash Bugs *love* it and will head to that before anything else, so you can concentrate on destroying the bugs on those plants, and when it builds up pretty high just dispose of the plant and bugs and all) (Hart's Greenhouse)
1 4" Bush-style Cucumber (Hart's)
1 4" Early Girl Tomato
1 4" Mortgage Lifter Tomato

Oddly, neither Putnam nor Hart's had Beefsteak Tomatoes.

Oh, and a stirrup hoe! I used that hoe later in the day...I really liked it's action! They had two models, the heads were almost identical. The one for $24 was riveted to the handle, while the $28 used bolts -- I figured for the extra $4 it would be a lot easier to replace the handle if necessary in the future. 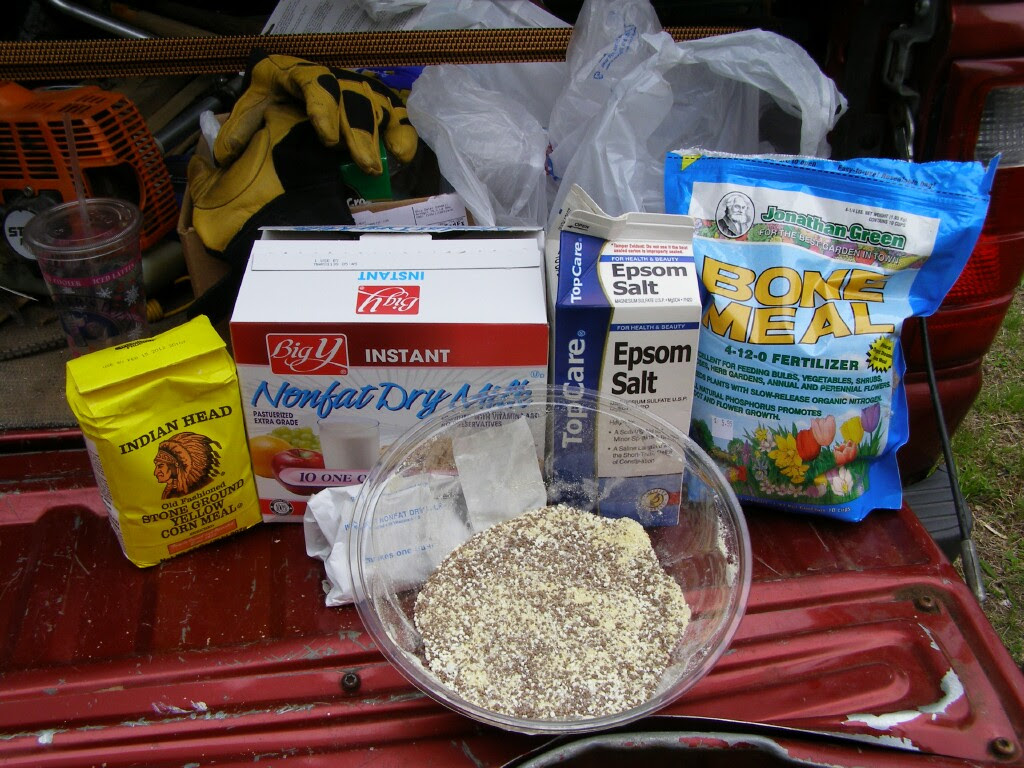 Mumsey's Mix is something revered at the organic gardening forum I hang out at.

The bowl, if you're curious, was a cookie tin (plastic?) from the supermarket store-brand cookies. Mix 2 parts Bone Meal, 2 parts Corn Meal, 1 part Epsom Salt, 1 part Powdered Milk. 1/2 cup in each hole when planting (stir it into the soil). Maybe a side dressing late in the June-ish. I was kind of grumbling that the ingredients added up to about $25 (the milk was $11!) but this is probably enough to cover my needs for two or three years...the milk probably five or six.

That should make for a very good field trial with plants growing side-by-side in the same conditions except mix or not. 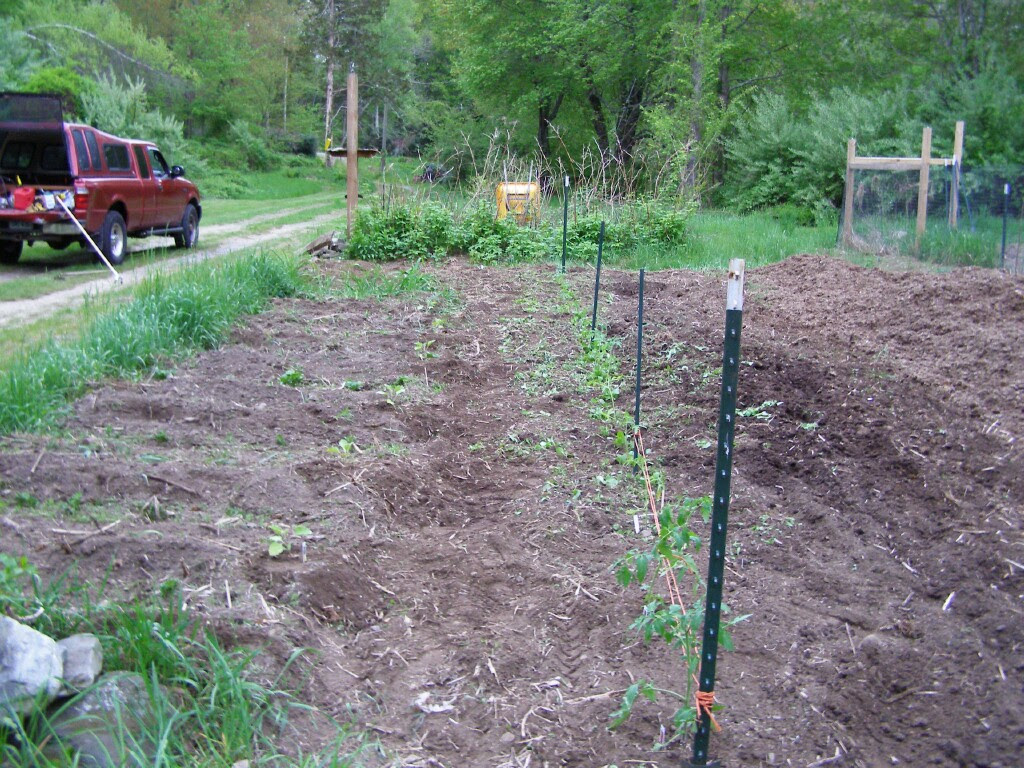 Pictures aren't the best since it was really cloudy and after 7pm by the time I took them.

The tater are on the left...the mounds aren't the hills, it's the dirt that will be hilled back onto them. I'm also planning on putting a layer of straw on top of them too.

I planted the Eggplants next to the taters.

The row with posts (with a one or two more posts still to put up) is the main tomato row.

Doesn't show up well in the pic, but I sowed turnips a few weeks ago and did the initial thinning today. I'll thin them again for greens later this week down to one turnip in each spot. I figure they'll be done before the 'maters are big enough to compete for resources.

I forget who it was at the organic gardening forum that I learned this way to stake tomatoes from. Put in the T and U posts, and run baling twine between them. I only put up one short length so far...the 4" pot Early Girl needed some support. And that's used twine I took down last year! Since I have a 4500' spool, that should be a lifetime supply for me (they sell 2 x 4500' for about $25 IIRC at Tractor Supply...gave the other roll to a friend for his kids to use as play string) 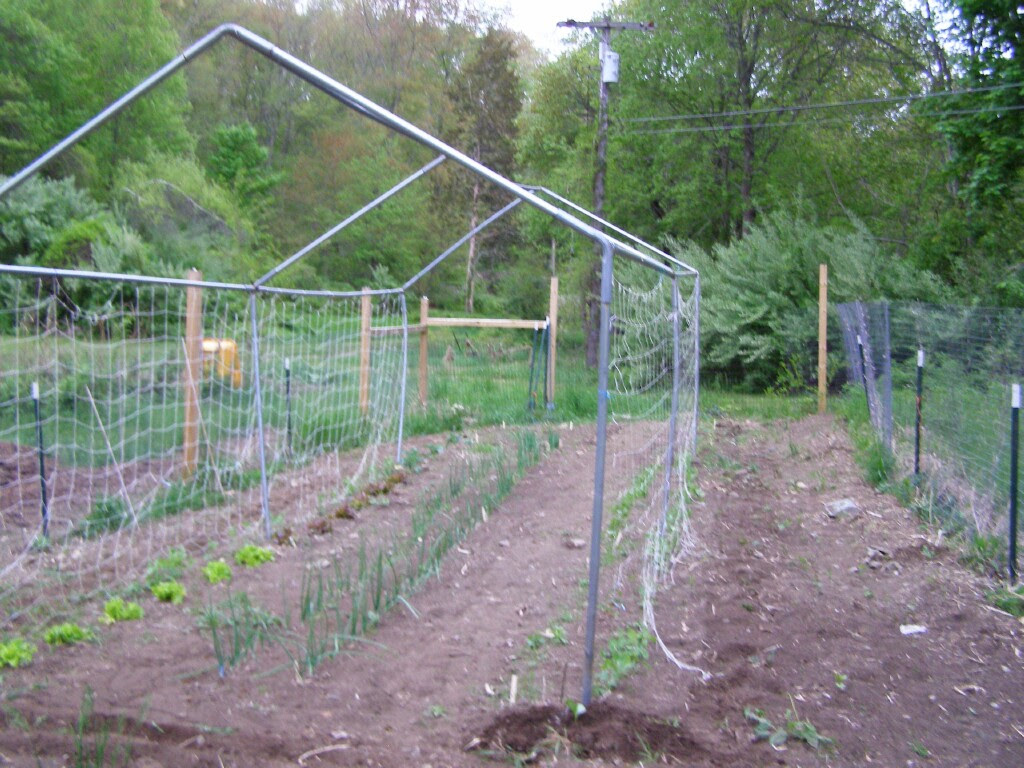 Again, not a great photo due to poor light.

Dropped the trellises for the peas, but I still need to stake and tie them down this week.

The onions were looking really flaccid so I asked on the organic garden board and they said they were just thirsty. I've never had onions looking this nice, this consistently, this early before so I didn't have a personal baseline to compare them to.

I hauled down two 5 gallon buckets of water to give the onions a drink on Friday and they did perk up a bit. We have a 60% chance of showers everyday till next Saturday, so I'm hoping to get away with not hauling down the hoses quite yet! 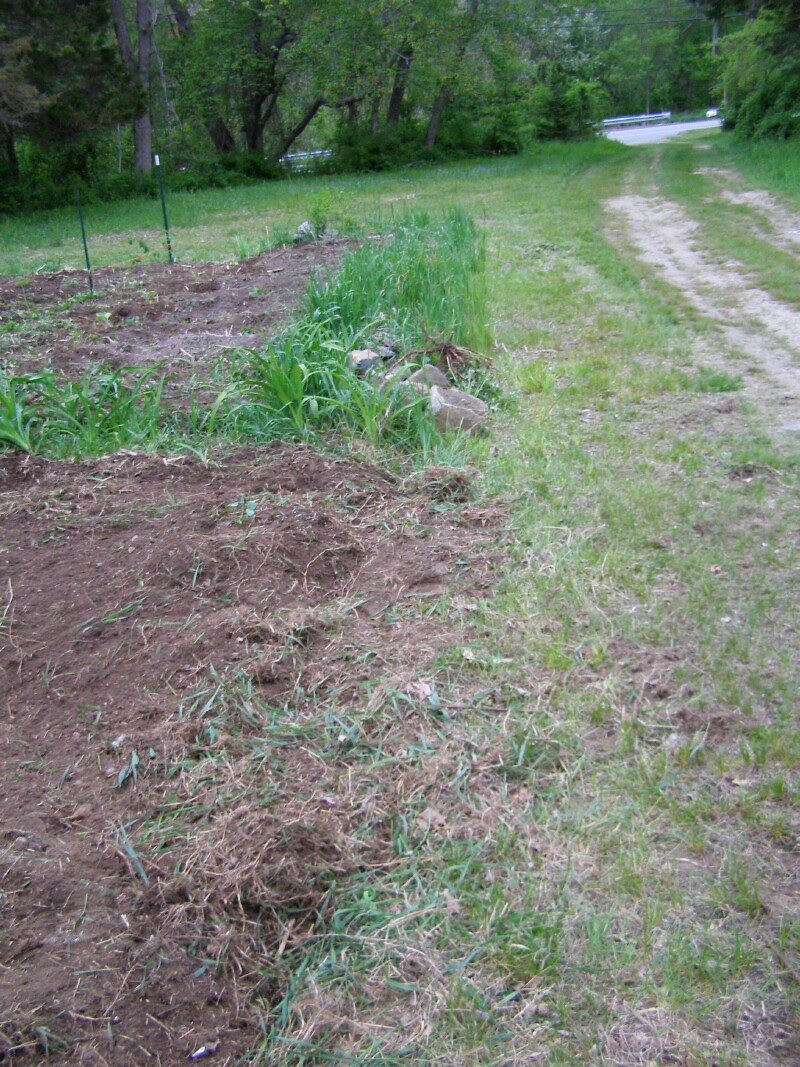 Garden is built on gravel fill (bad soil, great sunlight), which is why I have the local dairy farm deliver a spreader load of manure each year to help build it up.

I used some of the rocks to edge a raised bed. That's proved to be a fiasco -- difficult to weed, can't mow next to it, weedwhacking goes through tons of string (since the rocks were it down). So I'm in the process of tearing it down so I'll be able to mow / hoe / cultivate with the tiller right up to the edge of the bed.

Couple cucumber mounds in the foreground.
Posted by Matt at 10:34 PM