Russian losses -- this seems to follow the UKR General Staff released numbers along with a "rule of thumb" calculation for wounded.

Remember 1) Wounded does not mean permanently removed from combat; 2) I suspect Russia may have a worse KIA:WIA ratio than the US has in recent large wars -- they may be closer to WWII ratios along the lines of 1:2.; 3) the "intended for invasion" is from what was staged in February and likely some replacements have been moved up, but in many areas the "armed forces" total likely way overstates what is available on time lines measured in months to being returned to combat ready status from long term storage.
https://minusrus.com/en?v=1648007431105

The Battalion Tactical Group that makes up the basic manuever element of the Russan army:
https://www.benning.army.mil/Armor/eARMOR/content/issues/2017/Spring/ARMOR%20Spring%202017%20edition.pdf

White Phosphorus is not banned:
https://www.lawfareblog.com/jus-bello-white-phosphorus-getting-law-correct

Finnish Intelligence lecture on Russian culture:
https://www.youtube.com/watch?v=kF9KretXqJw&t=0s
In annoying computerized English if you just want to listen and don't speak Finn: https://www.youtube.com/watch?v=5F45i0v_u6s
Ethnicity of Russian military (hint: It's not Russian.
https://threadreaderapp.com/thread/1506479259866394625.html
The difficulty of taking out bridges by air:
https://www.airforcemag.com/article/1293bridge/


Of course they don't have functioning satellites...
https://www.rferl.org/a/russia-satellites-ukraine-war-gps/31797618.html 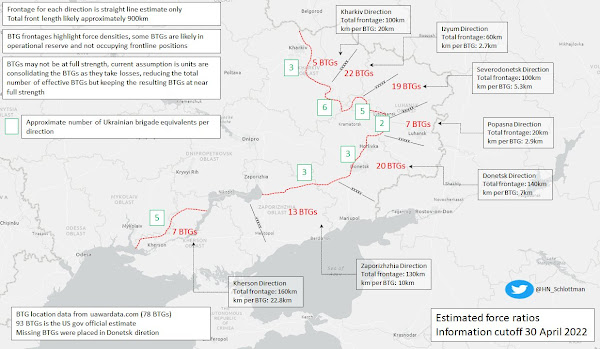 Russia will always...Russia:
WWI?
...go back even further.

Although the Ministry of the Navy acknowledged the importance of wireless telegraphy in naval affairs, in deed it did not show any initiative at all. In reality, the Navy remained without radio equipment, and the production of such was at the lowest possible level. The Russo-Japanese War, which broke out in 1904, showed how criminal was the complacency of bureaucratic heads in the Army and Navy... they did not take a single practical step to organize properly the production of radioequipment and to supply the units of the Army and warships with it.... Makarov spoke of the absurd state of affairs in the country, for although radio was invented in Russia, the country had to order radio equipment from abroad.”

That Russian ship that was falsely reported as sunk? The Admiral Makarov? Yeah, that's the guy it was named after. He was killed early on in the Russo-Japanese War.


Fascinating use of FIRMS to show a disparity between Ukraine and Russian positions being shelled:
https://www.dailykos.com/stories/2022/6/9/2103189/-Ukraine-update-Russia-appears-to-be-losing-the-artillery-battle-at-Severodonetsk

Kos of the Daily Kos was a US artillery officer. Another great piece about HIMARS & Logistics:

And this is what the M26 cluster munition rockets look like: https://youtu.be/gk_SwLbdlA8?t=40
155mm alternative warhead (dunno if the US uses this):
https://www.youtube.com/watch?v=G18Rwoa7c1k


US Stockpiles DPICM awaiting demilitarization 2019:
https://cswab.org/wp-content/uploads/2019/01/National-Academies-of-Sciences-Alternatives-for-Demil-of-Conventional-Munitions-2019.pdf Archive: https://web.archive.org/web/20191022212737/https://cswab.org/wp-content/uploads/2019/01/National-Academies-of-Sciences-Alternatives-for-Demil-of-Conventional-Munitions-2019.pdf As of 2019 the US had (Figure 2.3, page 16):

We don't know the rate they've been destroying them; and we don't know if that is the only classification the rockets are being kept in -- are there more that are off the "available to use" and "emergency use only" books but haven't yet reached the "awaiting demilitarization" classification.

First, take a 250 pound bomb intended for aircraft and put a GPS-guided glider kit on it.

Now take everything you think you know about rockets and bombs fly through the air and forget it.