So goal for today was to play with the camera and water.

One of several destinations I was thinking of was the "Old Stone Dam" in Hope Valley, which honestly I didn't know had a name until I got there. I just remembered from my Sunday drives it had rushing water and easy access.

Once I saw the dam was a Horseshoe dam, it made for a theme.

I believe this dam -- which was horseshoe shape in 1765 was that shape for aesthetic reasons, instead of the engineering reasons of later horseshoes.

As usual, click on a link and substitute "CR2" for "jpg" to get the raw photo :)

I guess I need to add brush loppers to my camera kit :D 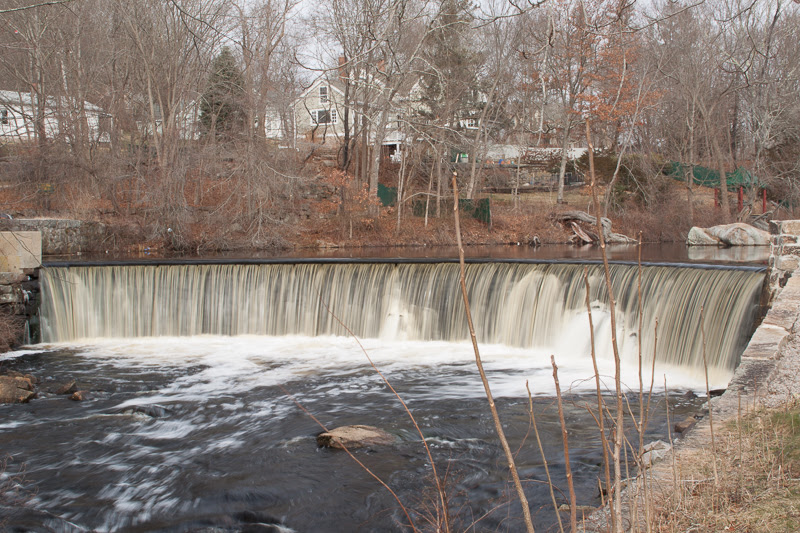 A lot that I was working with today was changing exposures to get the "silky" look instead of the "drops frozen in a strobe" look. 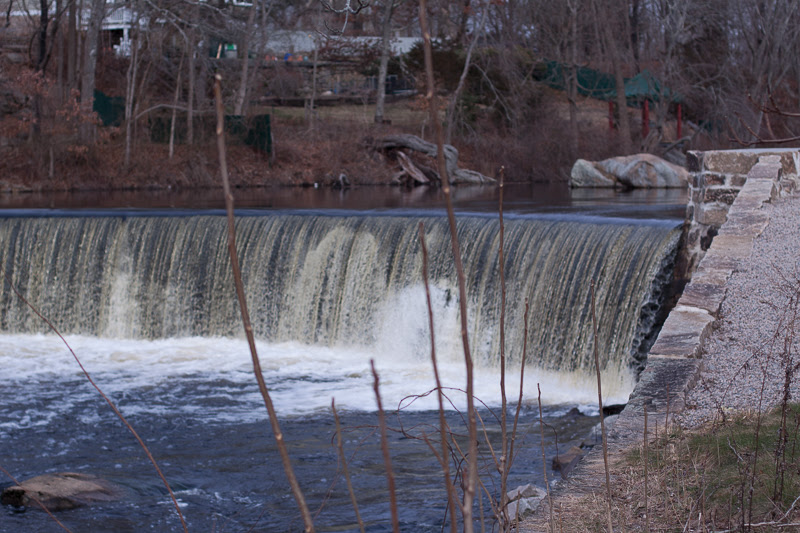 I believe I had a filter on already (though it may have been a polarizing rather than a neutral density). Change my f/stop to require a longer exposure: Another set. I used LightRoom heavily to get the exposures equalized on pairs of pics: 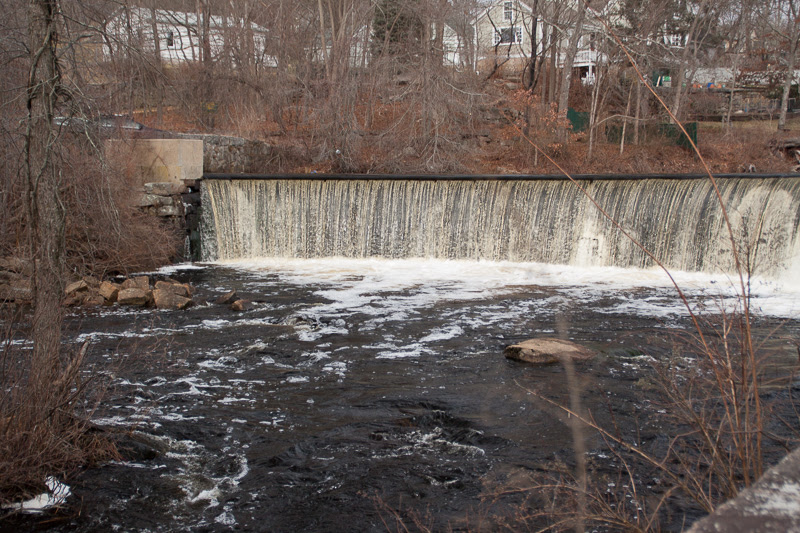 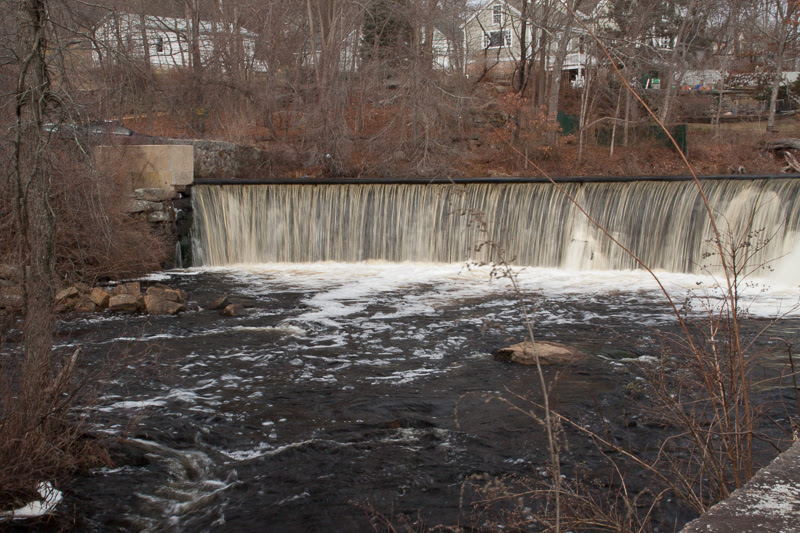 And three...which caught some nice eddies. I could use some additional filters or maybe a Variable Neutral Density to really play with this effect w/o having to change the f/stop (and thus the focus area) dramatically: 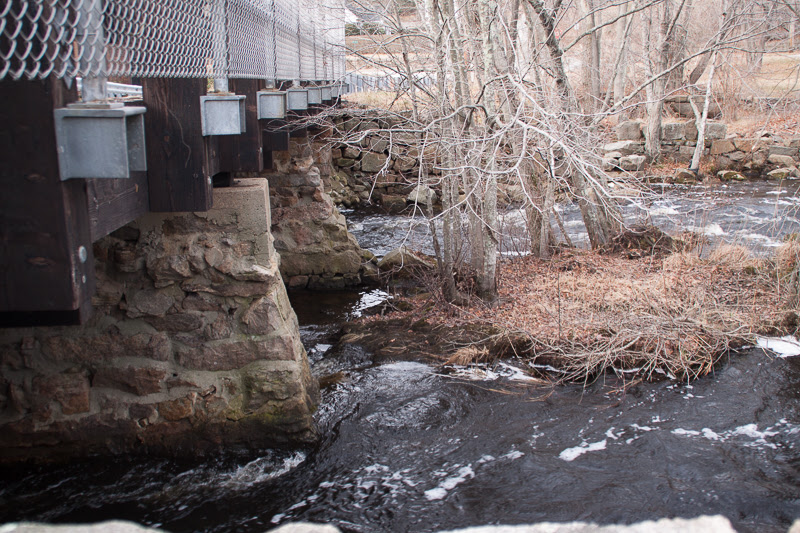 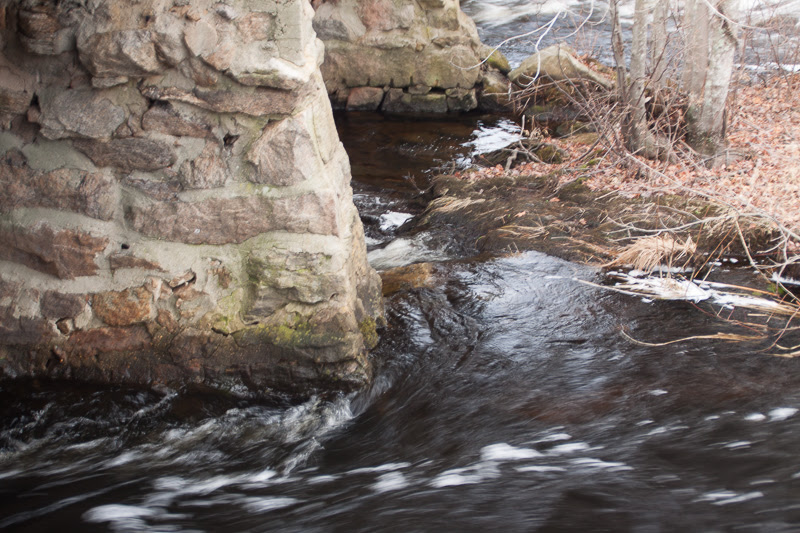 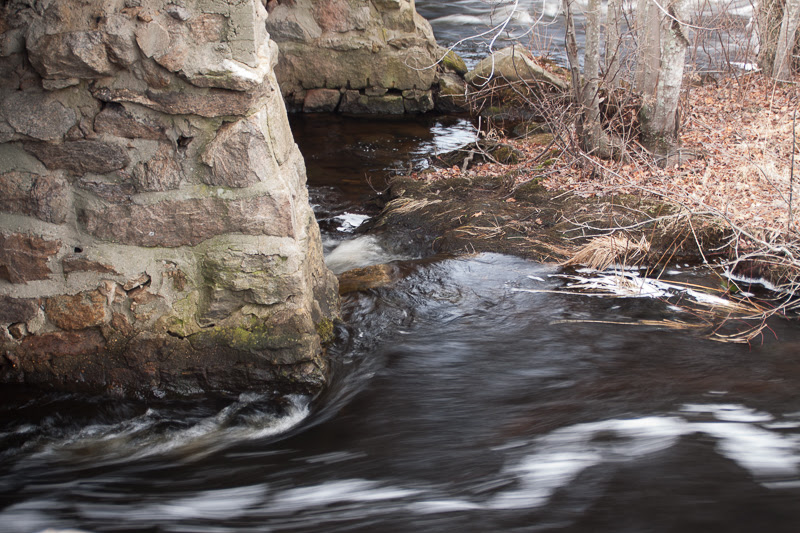 The dam had been harnessing the Wood River over a century already when this mill was built in 1869. The smoke stack went with a different mill that was on the other side of the river until it burned in the 1970s. I read this past week that Wauregan Mills (far larger) burned 1,000 cords of wood and 1,000 tons of coal a year in their boilers to supplement their water power -- 1,000 cords would require a "wood shed" of 2,000 acres in Connecticut to continuously supply on a sustainable basis. 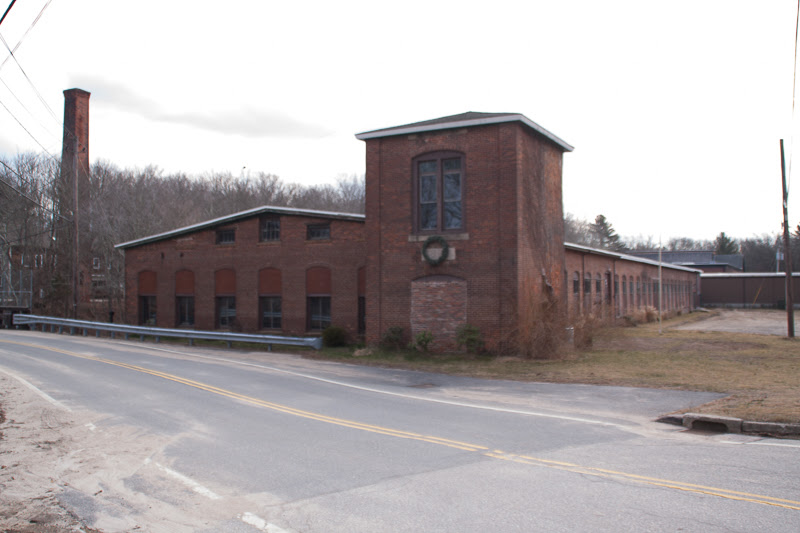 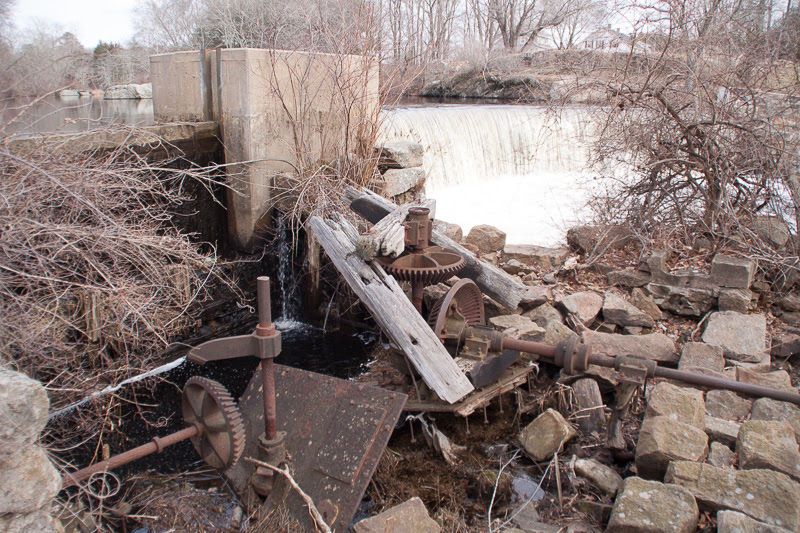 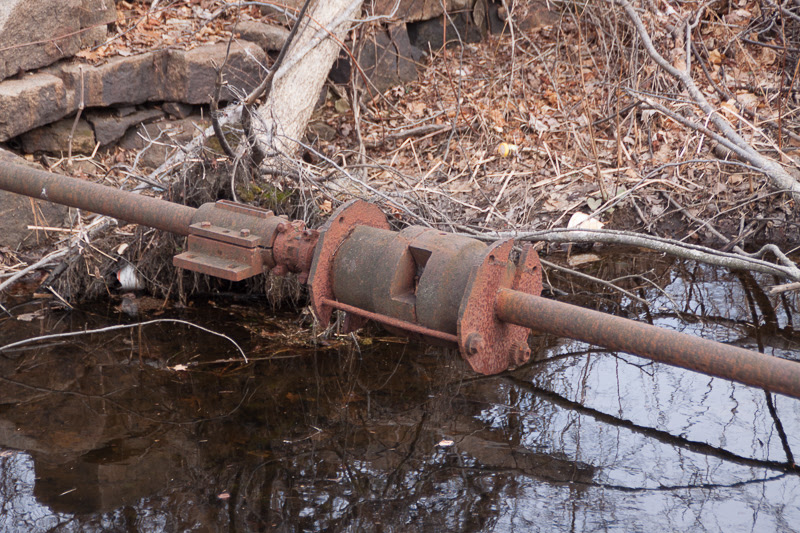 Gosh, this must be a pretty spot to photograph in the fall! 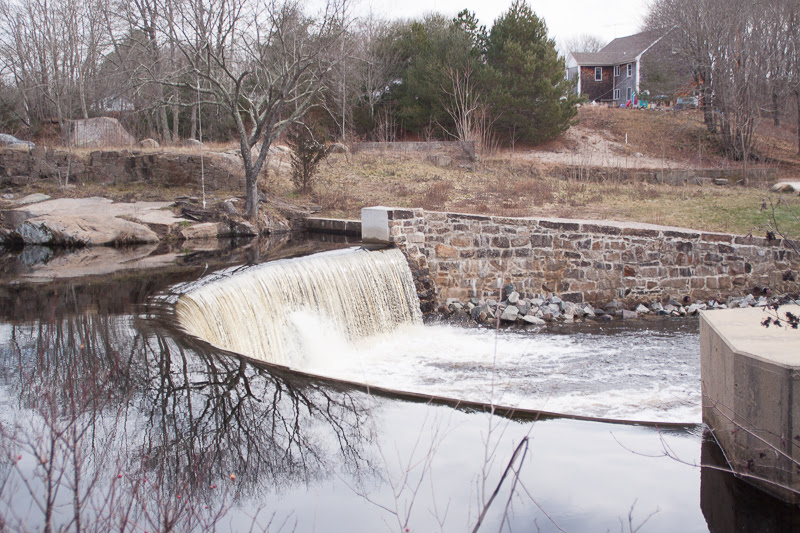 On my way to Shannock I missed the turn and ended up in Kenyon.

But it gave me an opportunity to see something I previously read about -- a group has been working to remove impediments to fish migrations along the Pawcatuck River. Here in Kenyon removing the dam was an option as the still active mill (it produces cloth primarily for the military) used the pond to supply it's fire sprinkler system. So instead of series of "steps" were built with rock rubble to create an artificial falls eels and fish and migrate up on their own: 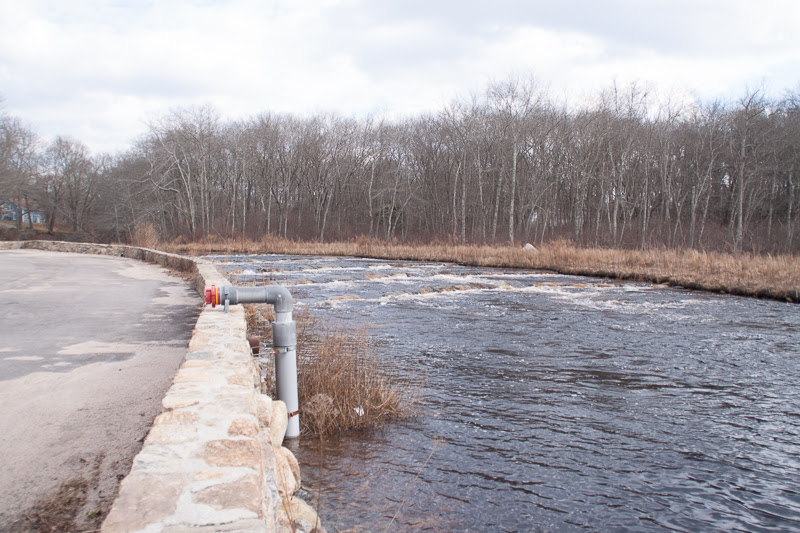 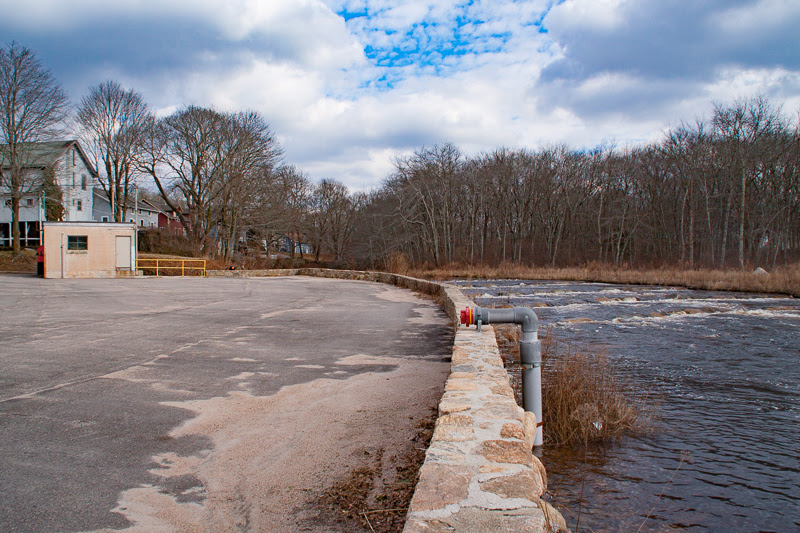 Which brings us to Shannock -- they didn't want to remove this Horseshoe dam for it's historical and aesthetic value, plus looking at the rocks they seem the "natural" falls would be more difficult for fish than the fish and eel ladders. There are separate ladders, but share the same area on the dam's left.

This dam WAS built for engineering reasons -- it allows a lot more water to flow over the top compared to a straight dam the same length as the open end of the horseshoe. They are used when similar height, straight dam would too easily be "flanked" by a flood causing it to wash out. Taking advantage of the deep gorge, a horseshoe here works perfectly. 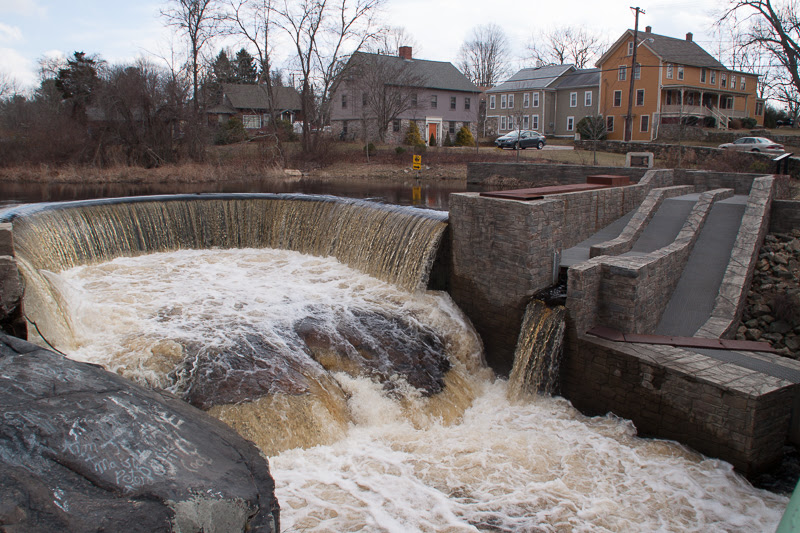 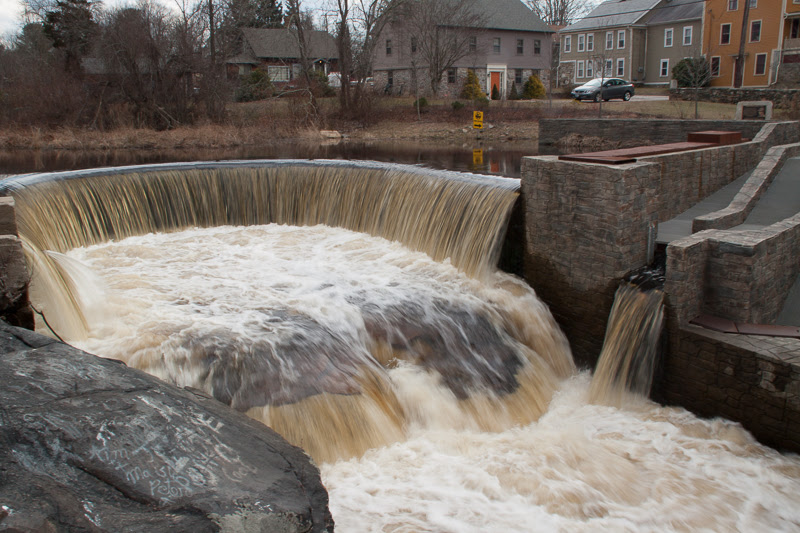 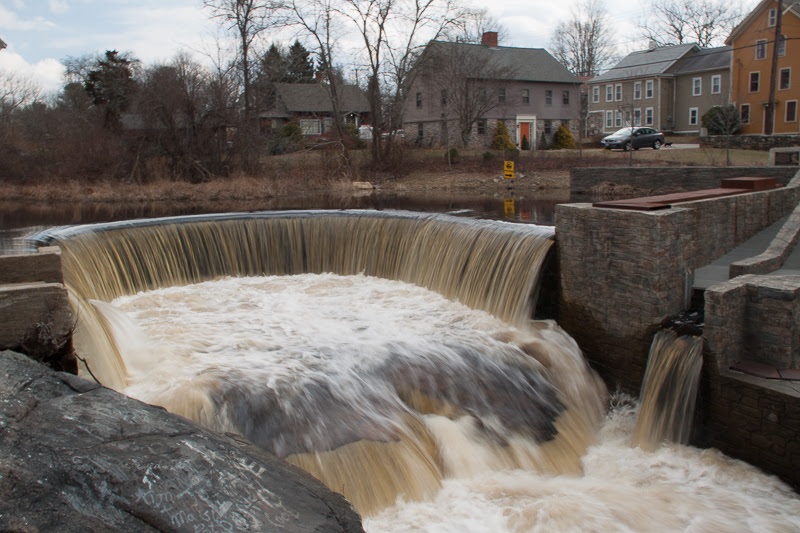 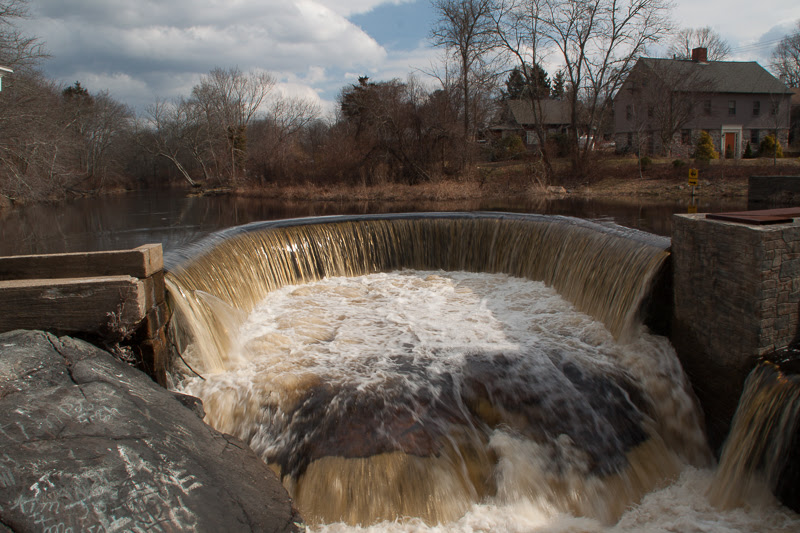 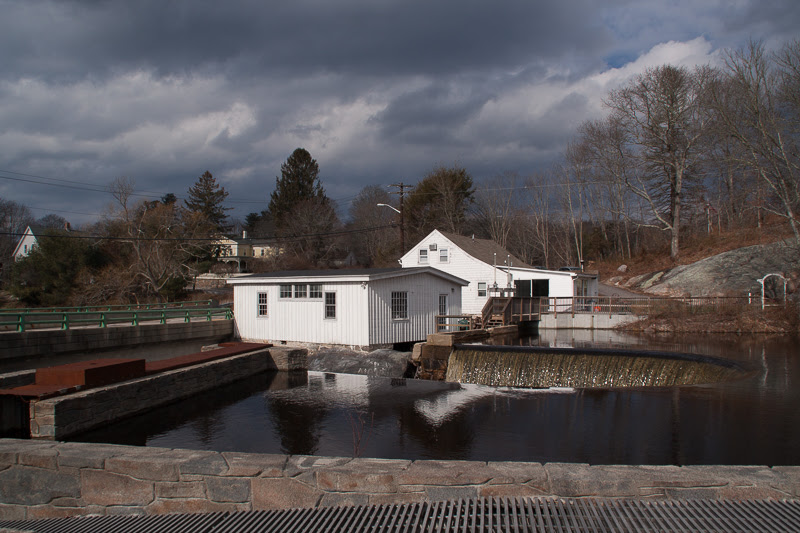 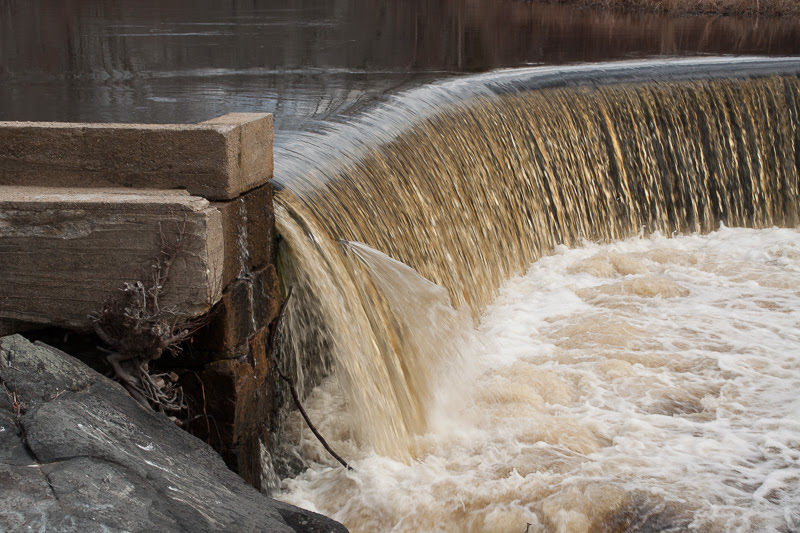 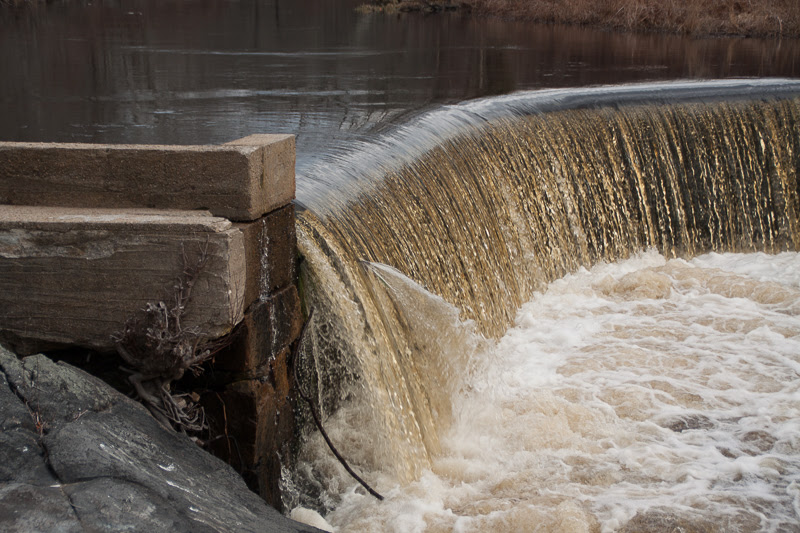 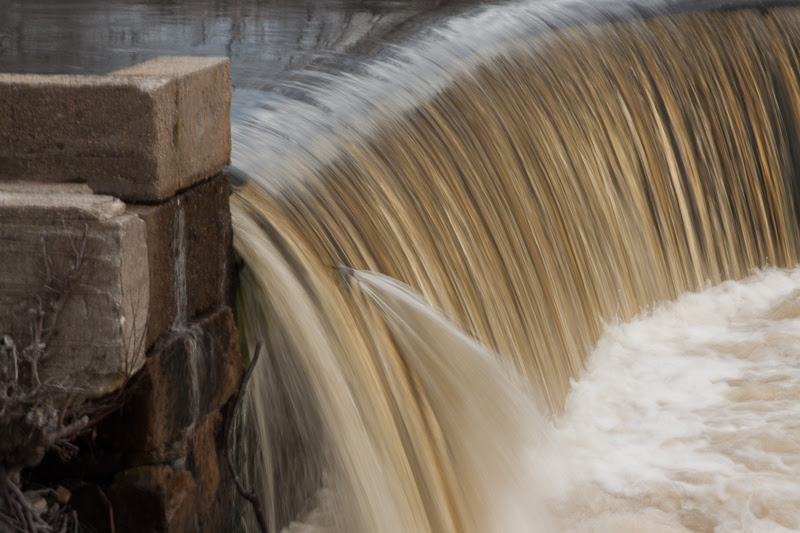 Sure is a mild January -- Kayakers! And leaving afterwards there was a pack of bicyclists heading into the village! 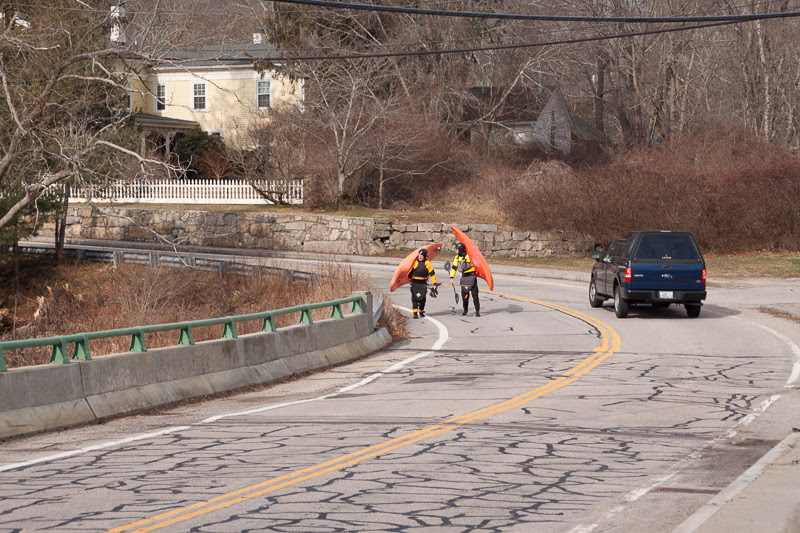 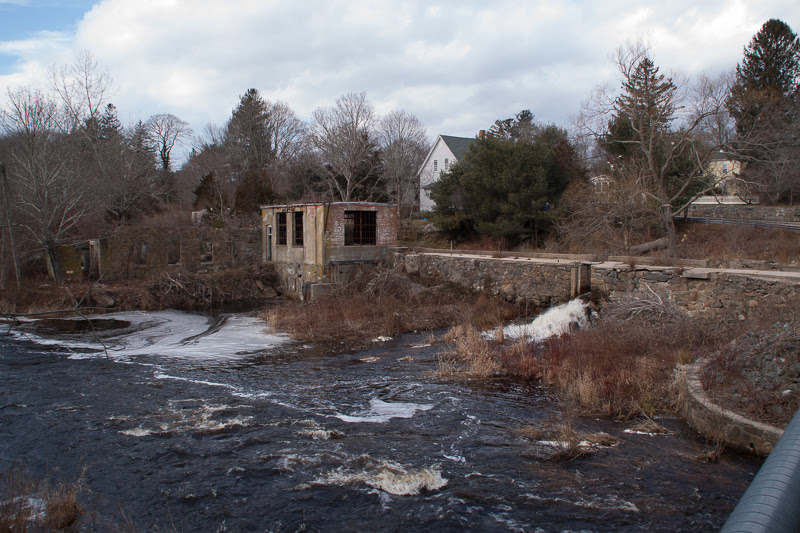 Over did it with LightRoom? I dunno, reminds me of some of the WWII era color photos I've seen! 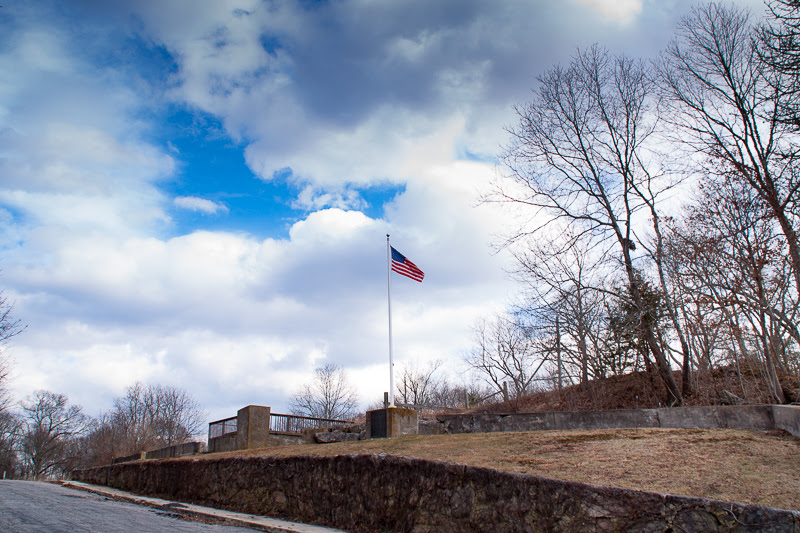 Another Horseshoe -- on Old Route 6 in North Scituate. 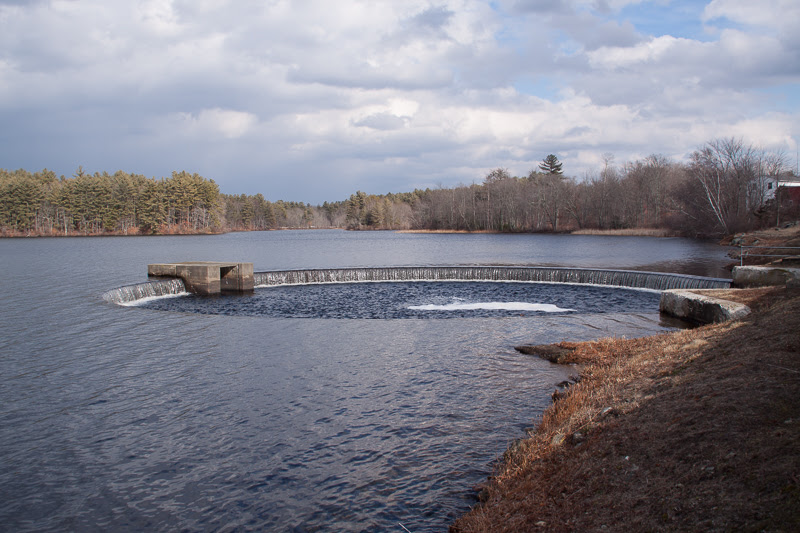 Then I remembered another Horseshoe built two centuries after the one in Hope Valley -- this time the spillway at the West Thompson flood control dam (well 3/5ths of a Horseshoe anyways): 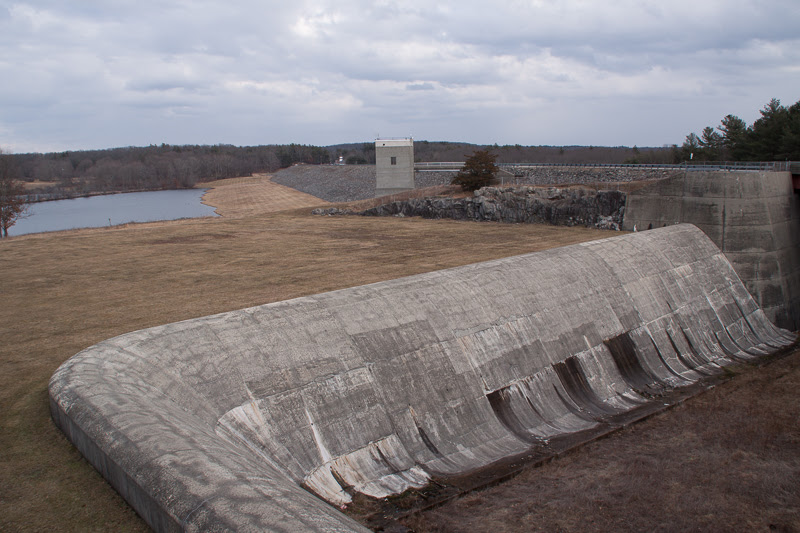 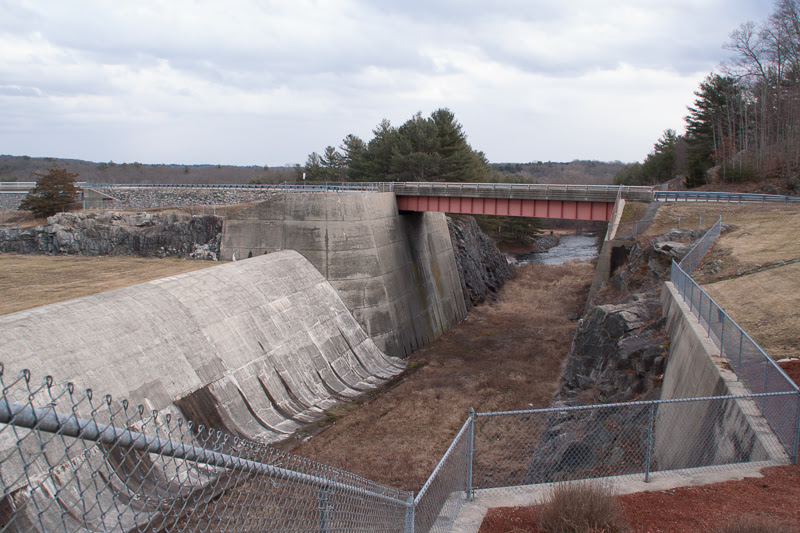 Oh...and just remembered I took this of photos just to use LightRoom to create a Panorama from five individual shots: