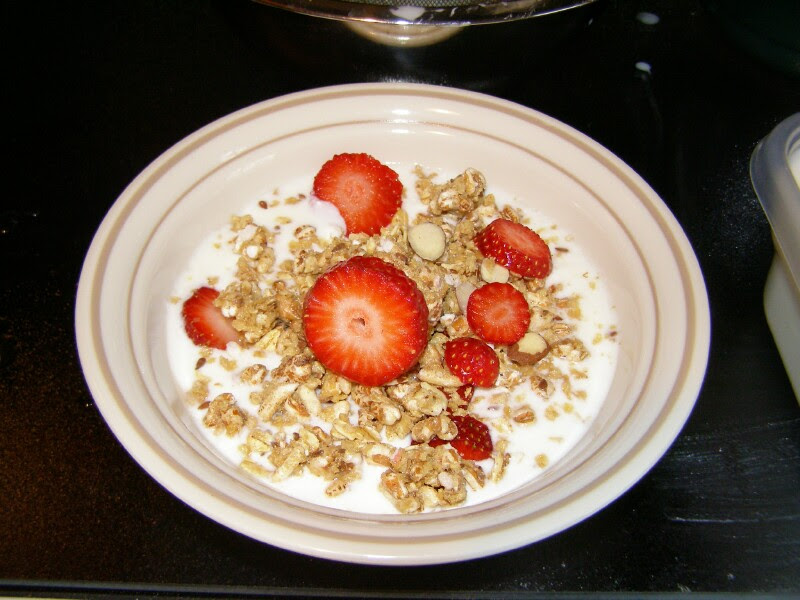 Was reading The Feast Nearby on my Kindle and the author had a recipe for making yogurt in the oven.  Hmmm, never thought of that before.

Bit more research I found "crock pot yogurt" which seemed even easier to make.  I have a little 1 Quart crock pot Karen gave me for Christmas (?) years ago that would be perfect for it.

First thing you do is heat the milk to 185º, which takes a couple hours.  This kills the existing bacteria, pasteurizing it.  You don't want to go much higher then 185º so watch the temperature!  Stir it once in a while when you check on it.  I used the aluminum foil to keep the candy thermometer standing upright.

For milk, I used a combination of raw milk from Baldwin Brook Farm in Canterbury and since I knew the the bottle only had a couple cups left I had picked up a half gallon of pasteurized, homogenized milk from Mountain Dairy in Mansfield (which sells through local convenience stores).  What you don't want is "ultra pasteurized" milk which has been heated to temps that break down the natural sugars. 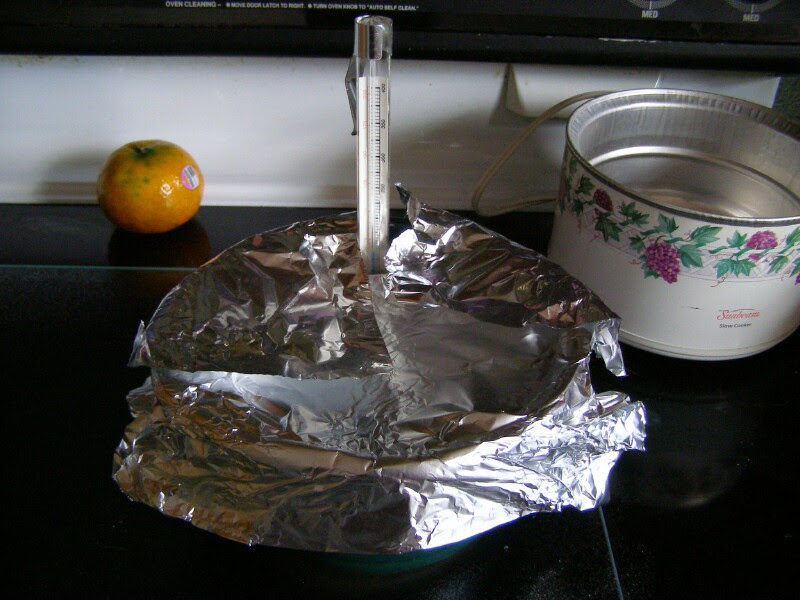 Once it reaches 185º, take it out of the heater part of the crock pot and let it cool to 115º.  The yogurt bacteria are killed at 115º so it can't be warmer then that for this next step!

Once sufficiently cooled, I whisked in half a cup of Chobani yogurt as a starter.  Any yogurt with live cultures should do (and you can either use a bit of this batch for next week's batch, or freeze some for future starter use in the next few months!) 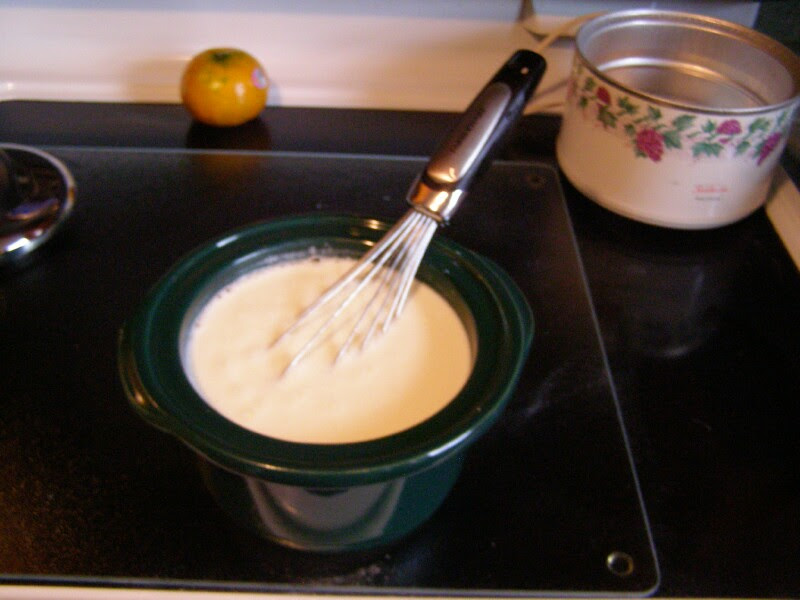 The bacteria (I guess "live culture" is the marketing term :) ) do best warmer then room temperature.  So put a lid on the crockpot, wrap it in a bath towel, and (optionally) pop it into a turned off oven for 8 to 12 hours to work their magic. 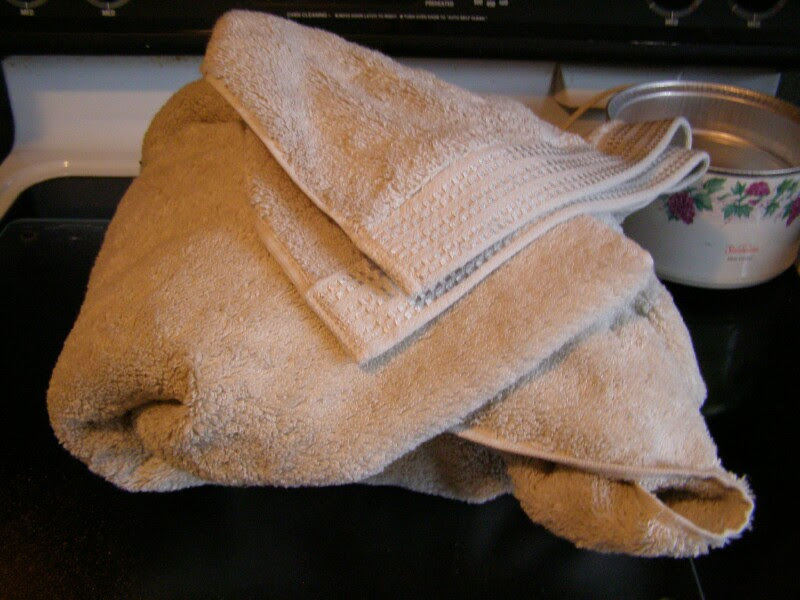 The next morning I have the whey (remember Little Miss Muffet eating her curds and whey?) on top.  I probably should've just poured it off, I instead made a mess squeezing it through a cheese cloth!  Oy. 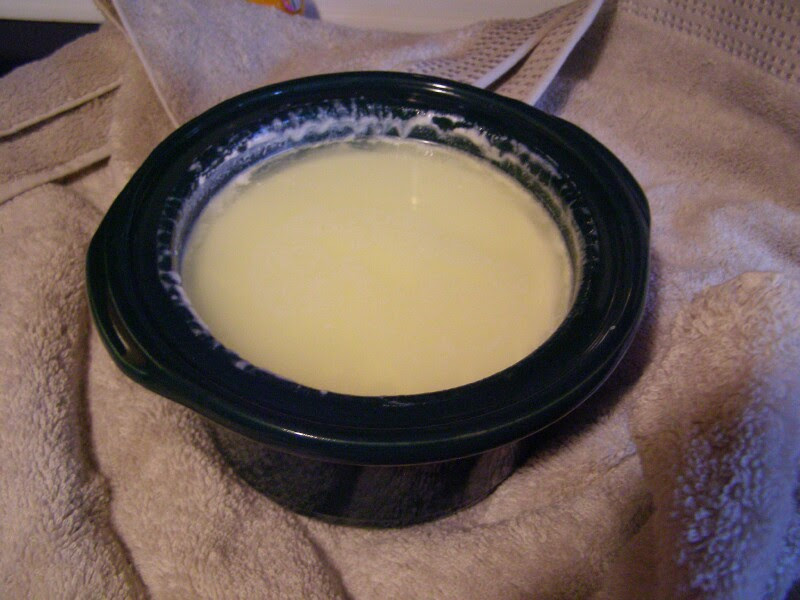 It produced a little less then a quart of finished yogurt.  The plain yogurt is a bit more liquid then store-bought -- where they add other ingredients to stiffen the texture.  And it's very un-sweetened compared to flavored yogurts.  But add in some fresh fruit and granola and it's scrumcious. 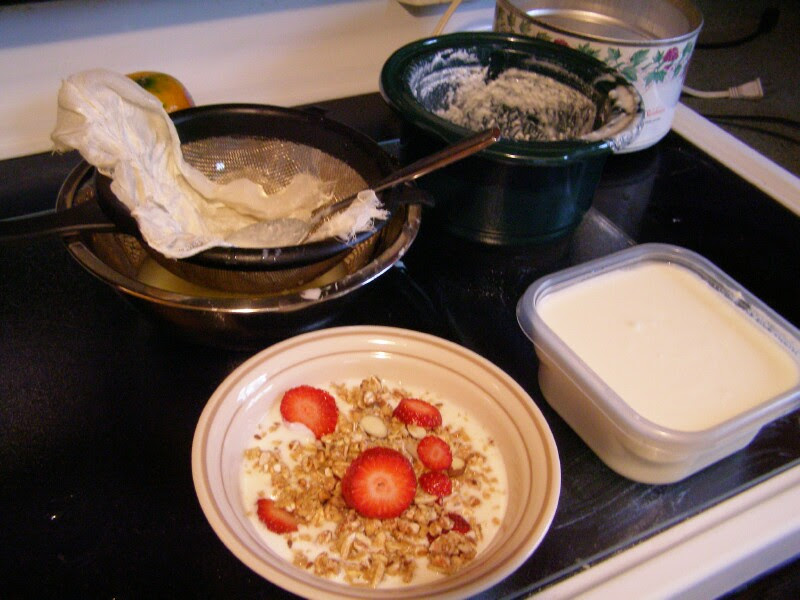 I remember Papu trying to get me to eat something very similar to this -- I can't remember if he called it homemade yogurt or something else; I know he got a starter culture from one of his friends and then would keep it going during the summer. Since I used relatively expensive milk (raw and half-gallon convenience store) I worked my cost out to $3.15 for a quart.  Still cheaper then buying 6 ounce cups for a buck each, maybe about the price of a quart size of plain yogurt.
Posted by Matt at 12:17 PM