Because I will forget all the steps it took in another five years when I have to do it again.

Eastern Connecticut has been using a proprietary public safety paging system on 152.0075 since back around 2000. This is a shared Hospital / Public Safety frequency used for paging nationwide; in cities you'll often hear continuous pages going out over this frequency as Alpha pages continue to be cheap, simple devices with more reliable reception than "smartphones."

An protocol called POCSAG written in 1976, when Post Offices ran most European telecommunication networks, is used to encode the messages and they are sent out at 512 bits per second.

A program called PDW is used to decode these messages.

My first setup was able to use the sound card to feed PDW.

I came home one day to find that computer in meltdown mode.

I was never able to get the sound card to work with the next laptop I tried, or a relatively inexpensive refurbished HP computer I bought off Amazon.

This still wasn't sufficient so I broke down and bought the USB dongle from the fellows who originally developed the software (if I understand the story correctly).

This did a great job and worked for me through 9/28/17 when I took down my setup to do some major home renovations.

When I set the kit back up this summer, it was no joy.

After fiddling for a bit, I started to suspect I just wasn't getting a "clean" enough signal. I don't know if scanners lose the sensitivity as they age, or maybe my antenna connections were getting loser. The POCSAG just didn't sound clear to me. So I went to You Do It electronics this morning and bought a new antenna...voila! I am working again! 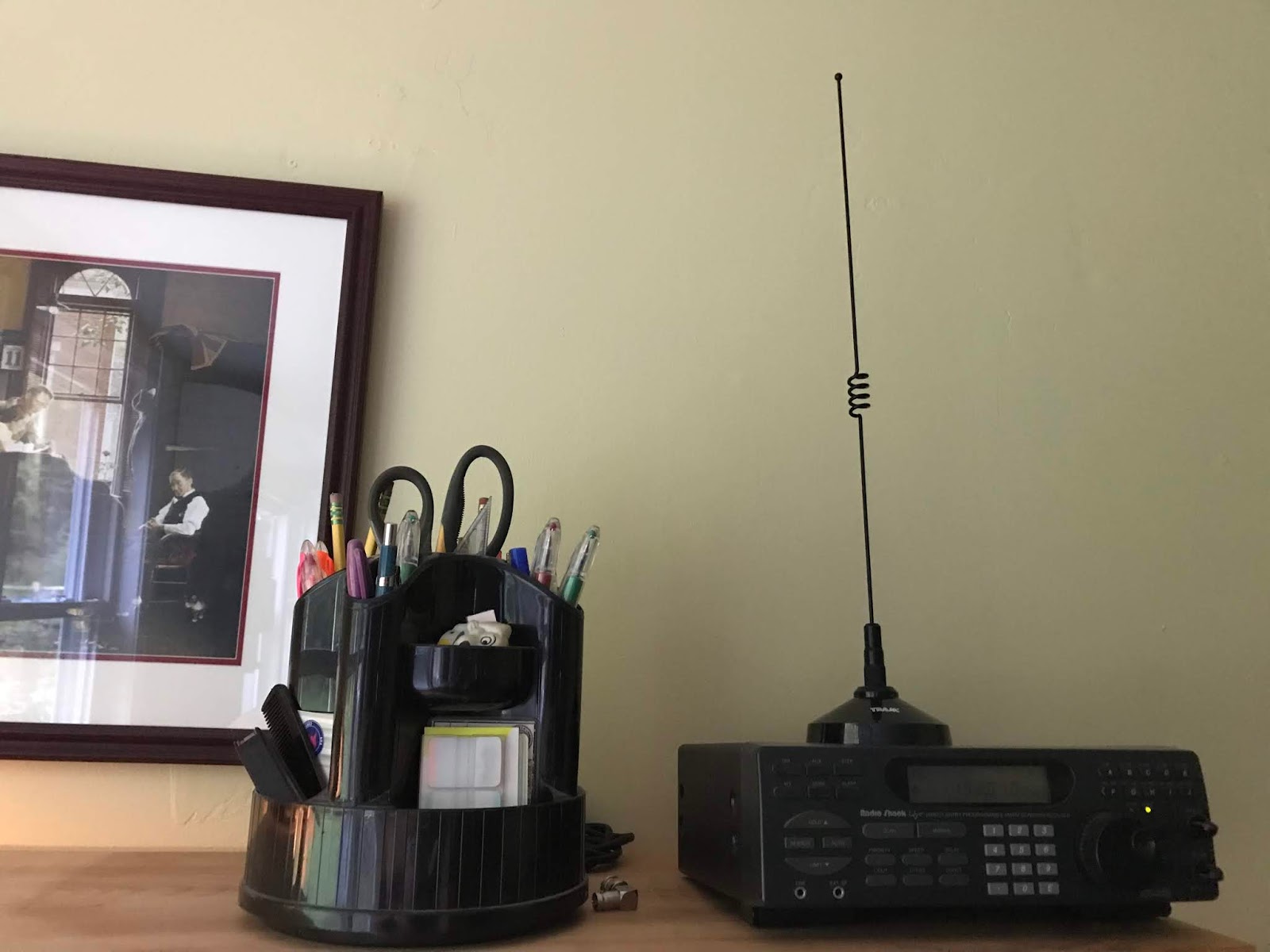 The next problem is I am seldom actually at my desk at home.

For my own fire company (I had this setup for the phone long before there was an "official" feed from the dispatch center to text messaging) PDW can email me:

First you setup the email setting, set to "selected filters only:" 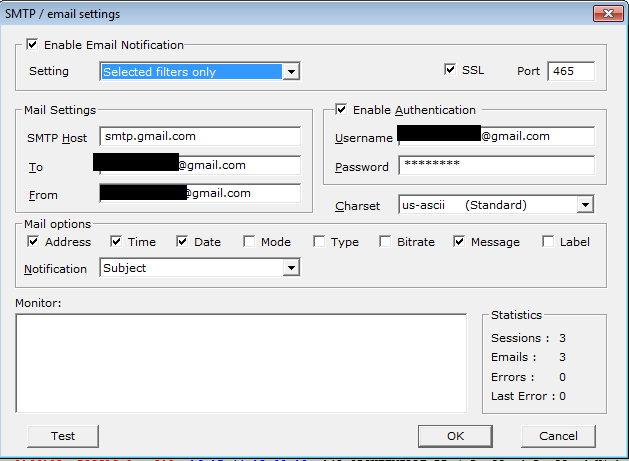 Then in the filters, you chose which filter you want to notify you. 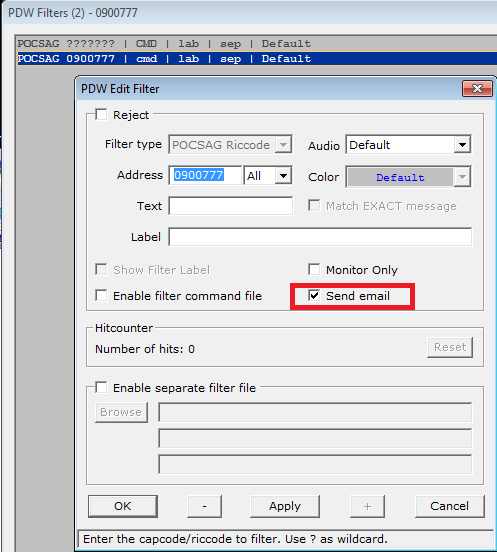 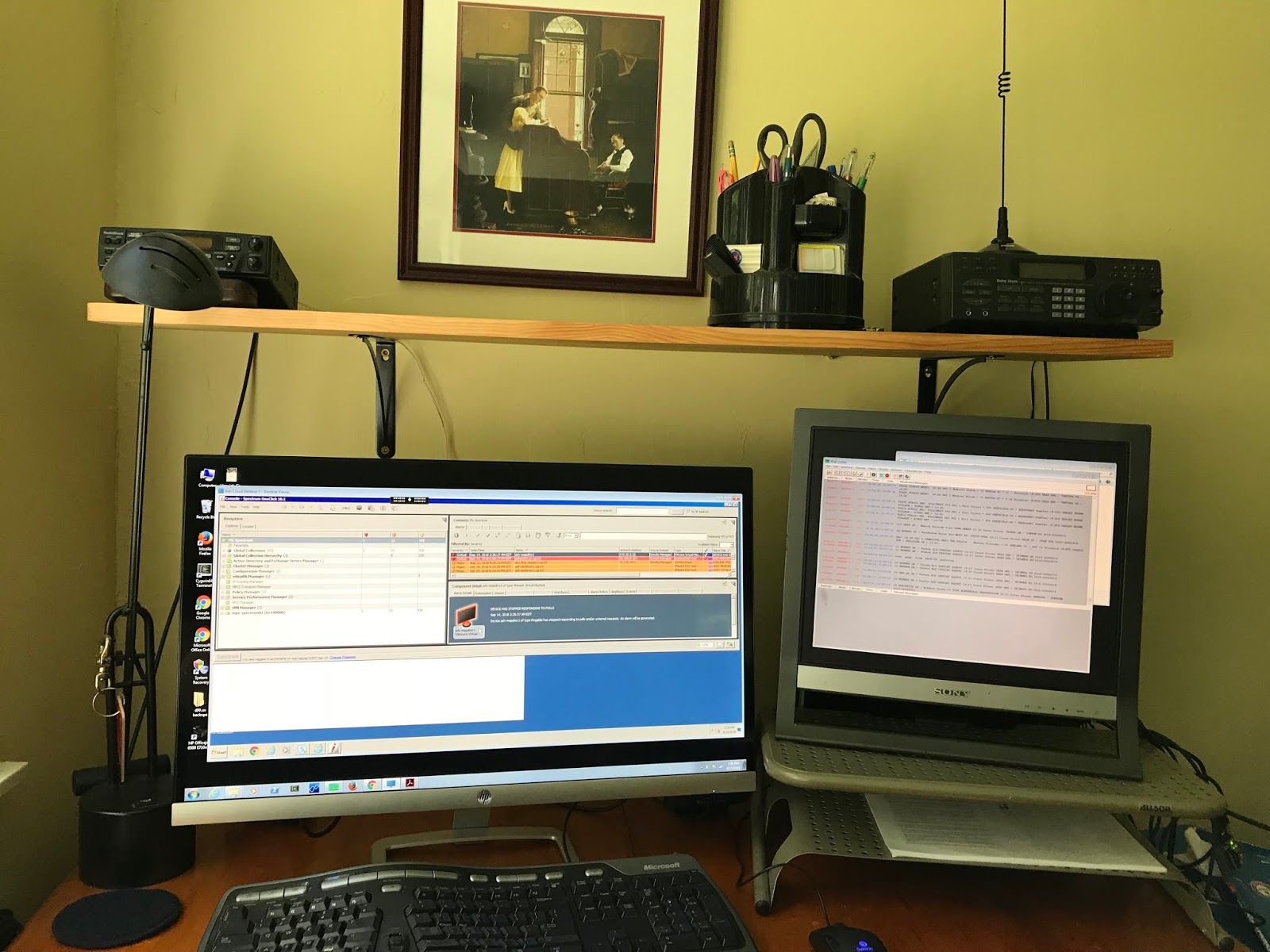 Now I had a condundrum:

1) I don't want to be always emailed everything;

3) I would like to see them from the office

5) I don't even want to have them password-protected, because by the time traffic is reaching the web server to verify credentials you're already getting slammed, and I wouldn't expose any web server to the 'net without a first class firewall today.

Inside my house I can have the 'puter run Nginx as a high performance, relatively lightweight web server. I used NSSM as recommended to make it a service so it will run automatically on computer start up (and I seldom lose power at my house).

In nginx.conf I put the following section to point to the directory: 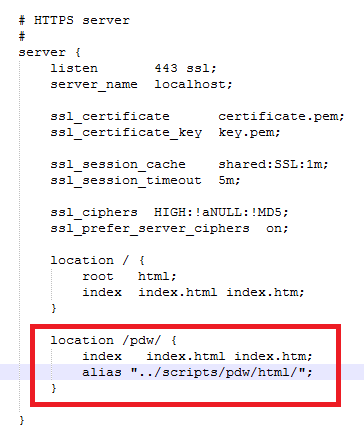 Now the other filter I have setup in PDW matches all capcodes. The capcodes are how pagers are addressed; and pagers can have their own unique capcode in addition to one or more group capcode allowing individuals to be alerted, or as used in public safety various groups like firefighters, ambulance staff, dive team members, etc. 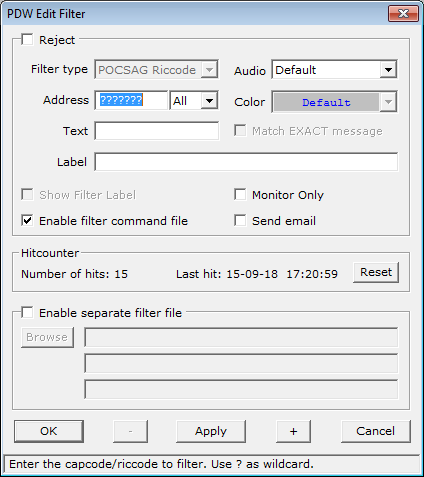 With "Enable filter command file" checked it calls a command... 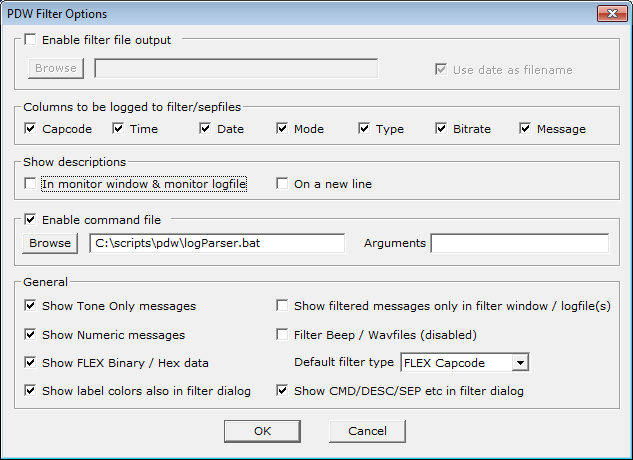 So whenever any capcode is decoded, the batch file c:\scripts\pdw\logParser.bat is called. I think PDW can only call .exe, .com, or .bat files (although I could be wrong):

This in turn runs a simple PowersHell Script (I'm a BASH guy who for the last 3-3/4 years has been a Windows guy writing almost entirely in PowersHell) that produces an HTML page: 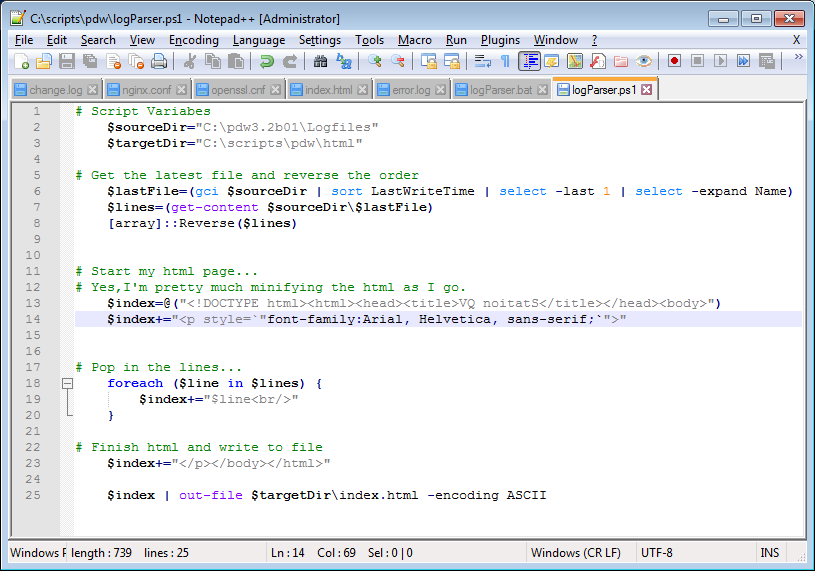 At this point I can sit in my easy chair watching TV, surfing the net, and if I hear a page go out I can check on my local network, with the most recent page at the top: 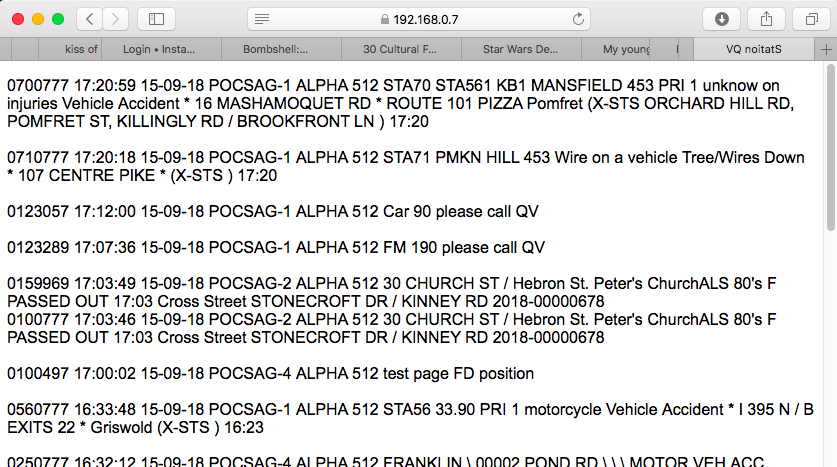 As I said, I didn't want this open to the whole world, and I don't have a truly strong firewall. But my router I am confident enough in its ability to drop all traffic that isn't originating from my work's ISP IP addresses: 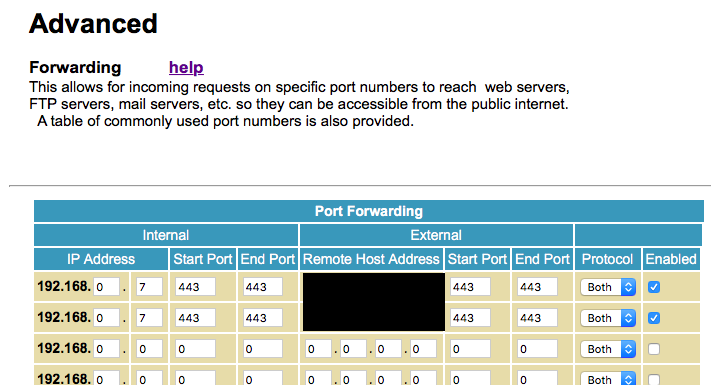 This denies almost everyone in the whole wide world from getting in.

But if I am on my work network (in the office, or say by Citrix -- which I can also do from my iPhone), I am allowed in: 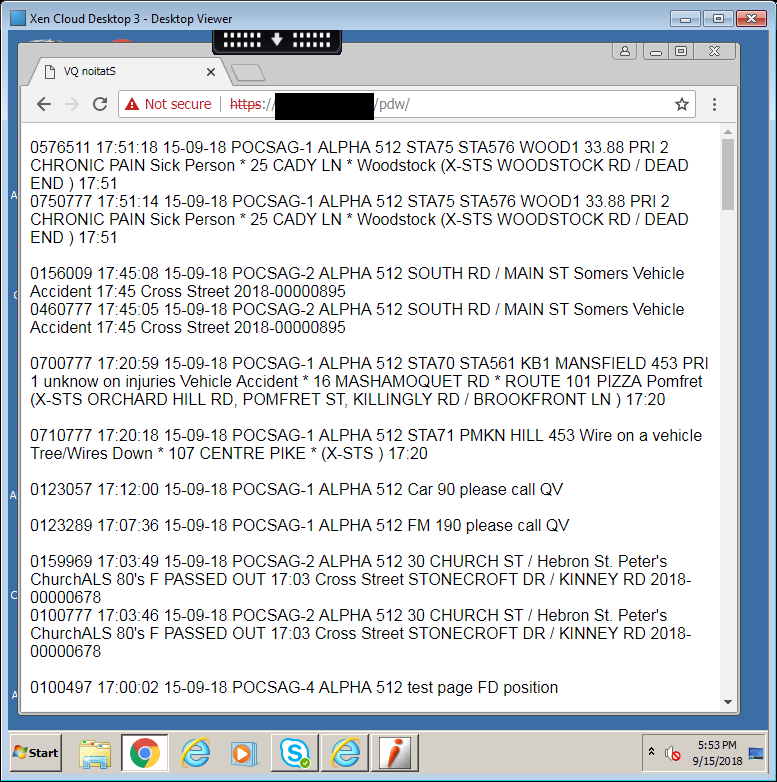 To help understand the coding scheme in general use, a little bit of background is needed.

For some reason when the current radio call sign scheme was adopted in the early 1980s independent ambulance corps weren't assigned their own station numbers, and instead used the same number as the fire department of the district it was located in. For example the then Killingly-Brooklyn Ambulance Corps (then located at the American Legion Hall on Furnance St. in Danielson) used "61" the same as Danielson F.D.
At the time the fire service's Statewide Radio Committee had the following designations for EMS:
R1 -- First Responder
R2 -- Ambulance
R3 -- Medium Rescue
R4 -- Heavy Rescue
R5 -- Paramedics

R4 had already morphed from the original Civil Service "heavy" of implying ability to work collapsed building incidents into having requirements like hydraulic rescue tools and electric shock sticks.

There were few (if any) R5 resources in Eastern Connecticut when the system was adopted, but a number of services with more than 2 ambulances.

The sum of which Ambulances started being given designations as Rescue 5xx, 6xx, 7xx, etc.

That in turn has morphed into designating ambulance services as 5xx, even when affiliated with a fire department.

So let's look at this series of pages:

0561 = KB Ambulance
0630 = Dayville Fire Company (Station 63)
xxxx511 = "Ambulance Tone"
xxxx777 = "Fire Tone", or in KB's case seems to be their Paramedics tone.
For FDs the "777" is the equivelant of their Fire tone on the voice dispatch system; some larger departments have multiple tones / capcodes for Fire, EMS, Officers or other groupings that may be uniquely dispatched or need to be otherwise notified.

This isn't universal, but it holds up for most of the users of the Alpha system. (While QVEC owns the system, their are other dispatch centers that use it.)

Now begins what people see on their pagers / text messages:

KB1 KB's 1st crew. Usually ambulances in the area have a crew either on duty or on call for their first unit; additional units may not have personnel scheduled and instead are on an "anyone available" basis
33.88 Operating Frequency
PRI 1 1 = Respond Lights & Siren; 2 = Proceed with Traffic

Station M, Montville
Station M uses the alpha system, but I have lost track of their station numbers of the years.
Mohegan
Montville
Oakdale
Chesterfield