Need to get the prices so far...have the stack of receipts in my truck, but it's raining cats and dogs! 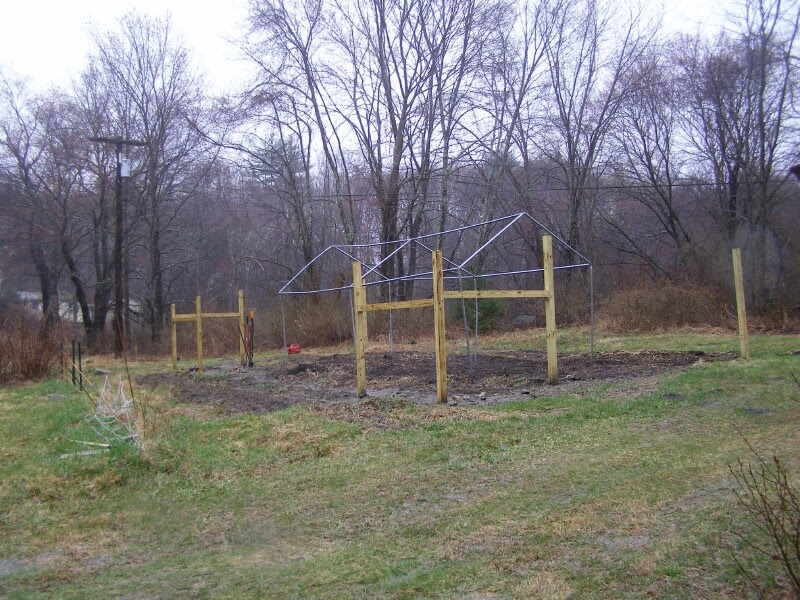 It is starting to look like a fence anyway :)

As I started laying it out, I decided at least the front will make a nice dual-use as a grape trellis and fence. That's when I committed to the heavy H-braces. Kind of hate seeing that much pressure treated in the garden, but gotta make compromises.

I'll be using 1" x 2" welded wire as the actual fencing material, with metal U posts to help hold it up between the corners. The front will have one more 4x4 in the middle to support the trellis wires. It will be 6" below ground, 4-1/2' above.

Running out of budget for this year, so I won't make the H-braces for the rear corners till next year, and I'll just use a flap of fence as a gate this year...next year I'll make nice swinging gates. I'm planning on two 4' gates on both short sides, which will give me an 8' clear opening which I should be able to drive my truck or tractor through if I have to.

The metal frame is something I bought years ago from Northern Tool for $99 with free shipping, it was never good as a tent, but it makes a nice frame for trellising. It used to be on the very left of the picture (you can still see some trellis netting I haven't moved yet on the ground).

Provided the soil drains out from the 6" deluge we're currently getting...peas and onions should go in the weekend. Then I have to put on the diagonal wires on the H braces that they depend on for strength, pound in the U-posts, rototill and dig the trench for the underground part of the fence, and hopefully I'll start to get the fence up this weekend too.

The area outside the fence will be used for stuff like corn, taters, squash that so far I've never had a problem with animals.
Posted by Matt at 10:30 PM